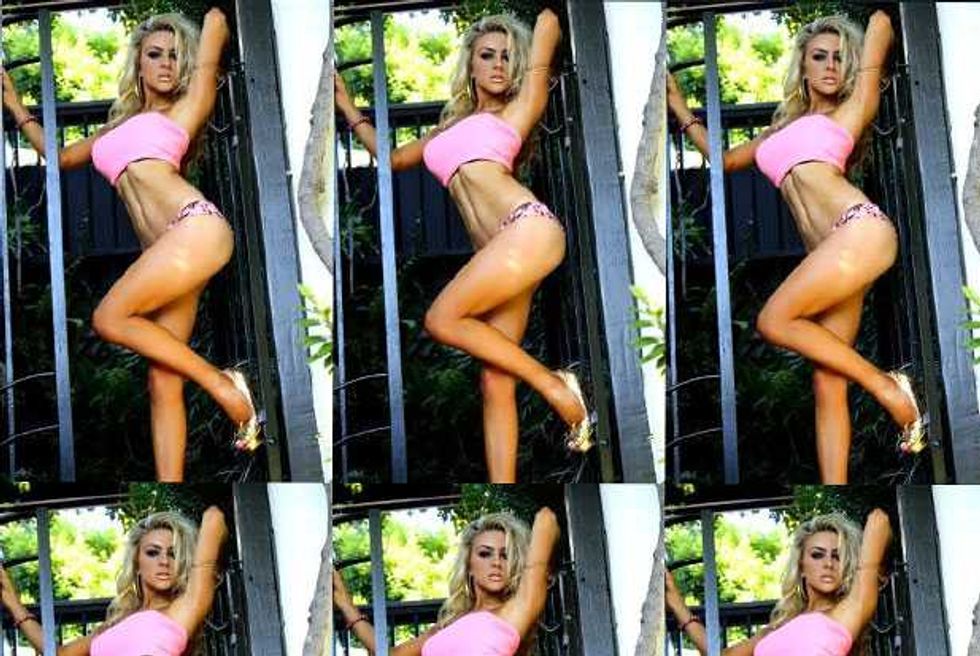 The confounding creature called Courtney Stodden came into our lives exactly one year ago. Where has the time gone, and how have our eyes not fallen out of our faces? Although she and husband Doug Hutchison celebrated one year of wedded bliss in May, we didn't know of the then-16-year-old with an ambition for pop stardom until June. Soon after, the world and our Twitter feeds, would never be the same. Here's why:

She couldn't see a R-rated movie, but she could marry 51-year-old Doug Hutchison (with her mom's permission).

2. SHE MADE NON-ENGLISH MAJORS APPRECIATE THE POWER OF ALLITERATION

Getting hot and humid as I hold back my hair with my hands & hustle my heated hips hastily; I heart hula-hooping! :)

3. SHE REVEALED THE REAL PRONUNCIATION OF "REAL"

4. SHE HAS EDUCATED DOGS ABOUT THE DANGERS OF BITCHES

5. SHE MADE PATRIOTISM SEXY AGAIN

6. SHE REMINDED US THAT THE TRUE APHRODISIAC IS A PHALLIC VEGETABLE

Making PETA proud, one day at a time.

7. HER FACE BRIGHTENED UP THE ANNUAL SEARCH FOR A HALLOWEEN COSTUME

8. SHE PROVED THAT EVEN PERMA-BIKINIED TEENS CAN BE BULLIED

9. SHE TAUGHT A NEW GENERATION ABOUT BAYWATCH

10. SHE KEPT THE BELIEF IN SANTA CLAUS ALIVE

11. SHE BROUGHT A PLATFORM TO REAL BOOBS THAT LOOK FAKE

Still don't believe they're real? Let's go to the videotape.

12. SHE EXPLAINED THE DIFFERENCE BETWEEN "THEY'RE" AND "THEIR" IN A WAY WE CAN UNDERSTAND

13. SHE FOUND YEAR-ROUND USAGE FOR PUMPKINS

14. SHE TAUGHT US NOT TO FEAR OUR DENTIST APPOINTMENTS

My moist mouth is wide open, motivated and ready for you... Dr. Dentist here I come :)

15. SHE TAUGHT PSEUDO-CELEBS THAT YOU DON'T NEED A REALITY SHOW TO MAKE BAD MUSIC

Particularly when one is called "Reality."

Feel free to leave your predictions for Year Two of Life with Stodden in the comments below.