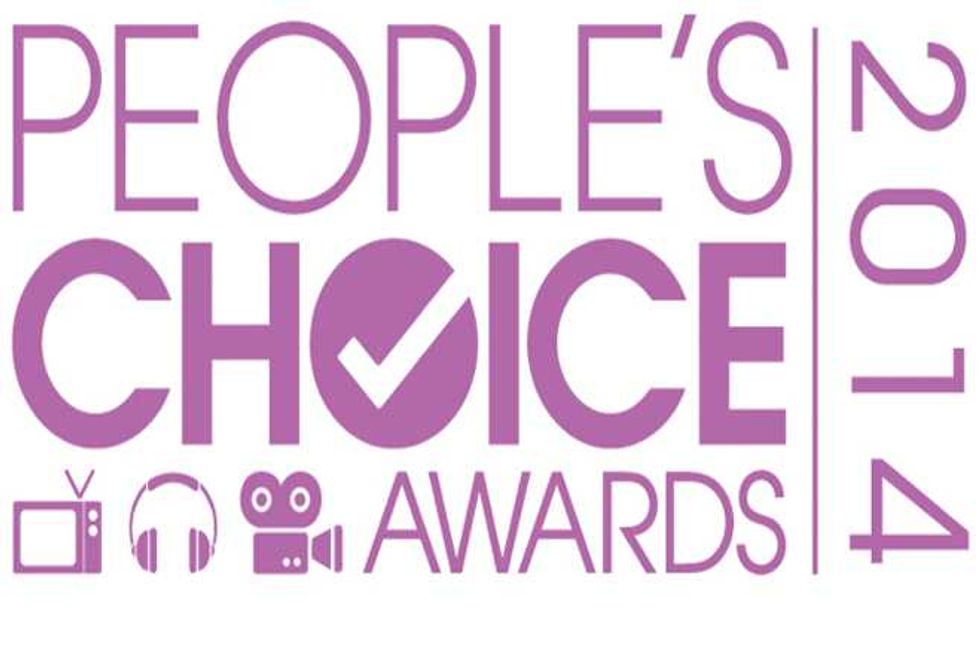 Calling all fandoms! The moment you've been waiting for all year (or the past eight days) is finally here!

2 Broke Girls stars Kat Dennings and Beth Behrs are on tap as the emcee's for the evening, and I will be here to guide you through the crazy music scene for the next two hours.

Sara Bareilles is expected to make a splash onstage with her hit "Brave," as well was country crooner Brad Paisley (with his current single "The Mona Lisa") and OneRepublic. Many of the past year's biggest TV shows, movies, singers and actors/actresses will duke it out for your votes tonight.

Check out the winners list at the bottom (which will be updated as the night wanes on). Check back often for the latest buzz!

And the live blog starts now...

Our lovely hosts Kat and Beth intro us in their Broke garb. "I prefer to think of this as my Golden Globes," quips Kat.

We are dished out with a lengthy skit with some pretty hilarious guest appearances. Kaley Cuoco is a personal fave here. Um, and Chrstina Aguilera (bow down, bitches!) makes a grand entrance with her signature out-of-this-world runs...because duh.

[9:07] Maggie Smith tramp stamp joke. Is there really need to go on? Best joke in the opening, hands down.

700 million votes have been cast!

[9:10] Brad Paisley has some "flies" he ordered that he still hasn't gotten, Beth.

[9:11] Sean Hayes (OMG! IT'S JACK) presents the award for Favorite Movie Actress...Sandra Bullock for her role in Gravity. She also takes the trophy home for Favorite Comedic Acrtress.

[9:15] Jessica Alba (gorgeousssss) presents Favorite Album...Justin Timberlake for The 20/20 Experience! Um. YES. Bonus, how handsome is he in that suit?

"I would like to thank Ellen," he begins his speech, "for all the personal inspiration...and the cookies."

"I treasure this because it's from the people," she says. "I wanted to make the show for everyone."

She hosted the PCAs five times. This is her first win. SLAY.

"I'm gonna watch my mouth, Nana, because you're watching," she jokes, "but it's hard."

[9:27] Stona Katic (of Castle, just FYI) graces us with her presence is an elegant print gown. She introduces Sara Bareilles' hit "Brave." Shhhhhh, it's quiet time.

[9:30] BOW DOWN TO EVERYTHING THAT IS SARA BAREILLES. Seriously. "Brave" is the best pop song of 2013. This orchestral version is genius.

Blake and Adam have NEVER date, for the record, but they have hooked up a few times.

Cee Lo lives with Carson, thinks he's hot. They're ready for a reality TV show. Yea. I'd watch that.

[9:40] Drew Barrymore (what the heck are you wearing?!) is up next. Ellen joked about her being fat. Well, that dress...I mean.

This is his fourth consecutive win in this category!

He proceeds to read a fan letter. "You do movies by far the goodest for me," the "fan" writes. As it runs out, the fan is Drew. (She's just getting pummeled tonight.)

Favorite Network TV Drama...The Good Wife. Julianna Margulies accepts. "Josh has a good reason not to be here," she says. "He's on his honeymoon in Thailand." Cue: AWWW.

Melissa McCarthy and Sanda Bullock bound to the stage to accept!

"Thank you to Boston!"

[9:52] Roma Downey (Angels are among us!) intros Mister Paisley with his rockin' new single "The Mona Lisa," from his Wheelhouse record. Great song. Go check it out!

Beth sings a line from The Sound of Music. Um. CARRIE UNDERWOOD (or something) reference! Then blasts a snippet of "Wrecking Ball." She just wrecked me...

Oh, and then she blasts into "Before He Cheats." Yup. Carrie might not be there, but she's everywhere.

"Baby, Got Back" was Beth promo theme. Wasn't it everyone's? BOOM.

“This is so cool! This is awesome! I wasn’t expecting this!” she says. Eeeeeek. My inner tween just squealed!

[10:17] NAYA RIVERA IS ON MY SCREEN. Santana works that outfit and hands out Favorite Comedic Actor...Chris Colfer. Duh. KLAINE JOKE TO SATISFY US.

“Thanks for always drawing abs on me when you draw me naked," he tells his fans. Heh.

[10:26] Lucy Hale and Joseph Morgan intro OneRepublic for a performance of their smash hit "Counting Stars."

[10:30] Ryan Tedder is one hunky frontman. He knows how to bring the heat and break the air conditioning. POW.

[10:36] Stephen Colbert special video message! He's with us in spirit. "Being a person, choosing things and winning things" are his favorite things.

"Which one of One Direction is cutest?" (Zayn, obvi.)

[10:38] Wayne Brady walks out with a cute little bow tie. Aw! He invites LL Cool J back out to the stage to into Jennifer Hudson.

[10:39] LL describes Jennifer as an "angel. "She turned a family tragedy" into something special...and the Julian King foundation. She's the Favorite Humanitarian.

So many feels. I remember her stunning Grammys performance in 2009. Now, she's taken that devastating event (the murder of her family in October 2008) into an inspiring, compassionate cause.

"There's healing in each and every smile," J-Hud says in a pre-taped segment. Powerful.

[10:42] With tears streaming down her face and her older sister Julia in tow, Jennifer gives such a sincerely touching speech. Seriously, if you aren't crying, you are cold. "It's very important to make a difference," she adds. TEARS.

"It also feels good to see positivity acknowledged," she asserts. She dedicates the tribute to her mother and brother, who would barbecue for the whole neighborhood.

[10:49]  Emily Deschanel and Michael Weatheringly who both "fight crime, drink wine and look so fine." They hand out Favorite Actress in a New TV Series...Sarah Michelle Gellar. Her first PCA...really??? None for Buffy? What is this world?

[10:51] Speaking of which, SHE GIVES A SHOUT OUT TO BUFFY! Yes, that freaking show defined my high school years in oh-so-many-ways. That musical episode "Once More With Feeling"? Yup. I listen to that **** on repeat these days. BAM.

[10:55] Matt LeBlanc (or forever immortalized as Joey) struts his stuff out onto the stage...to overwhelming applause. They are running out of time so he can't perform his next single...some country-hip-hop jam.

This is the show's third win. The illustrious cast, including Jim Parson, takes the stage to accept the trophy.

Oz the Great and Powerful

A Good Day to Die Hard

Now You See Me -- WINNER

How I Met Your Mother

Dancing with the Stars

Ted, Marshall & Barney (How I Met Your Mother)

Lily & Robin (How I Met Your Mother)

Emma & Hook (Once Upon A Time)

Beauty and the Beast -- WINNER

Once Upon A Time

Between Two Ferns with Zach Galifianakis

Losing It with John Stamos

Orange Is the New Black -- WINNER

Favorite Series We Miss Most

Once Upon a Time in Wonderland

"Just Give Me A Reason" (P!nk feat. Nate Ruess)

"When I Was Your Man" (Bruno Mars)

Based on a True Story… (Blake Shelton)

To Be Loved (Michael Bublé)

"Best Song Ever" (One Direction)

"Just Give Me A Reason" (P!nk feat. Nate Ruess)