Adventures In Dating—Spotlight On Clown Passions 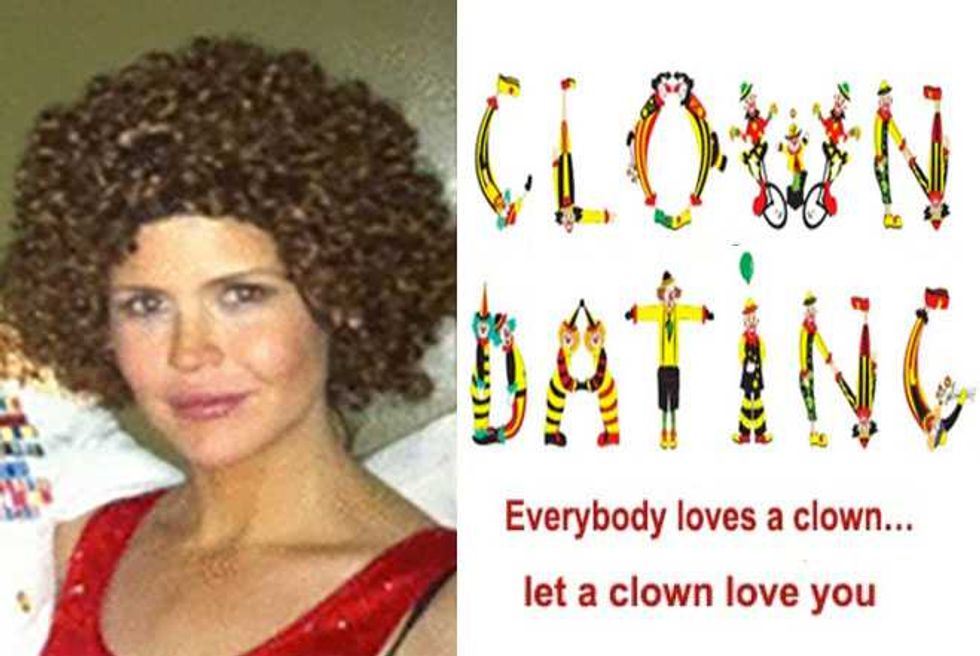 This week, we shine the spotlight on Clown Passions.

Though I suspected that even in my Richard Simmons’ wig, I would still crush major ass on Clown Passions, I learned that there are actually hot chicks like this one below who are just dying to get honked.

And finally, I learned that there’s a slew of alternate and pornographic uses for clown accessories.

This chick is hogging all the clown cock, and it's not cool...

BEST PICK UP LINE: You’re a perfect 10 on the rubber chicken scale.

NUMBER OF CORRESPONDENCES IN ONE WEEK: 32

Approach/Chat Up Line: Let’s settle down and stop scaring children.

Conversation Skills/Rapport: Remember the frog in the Bugs Bunny Cartoon that sings Rag Time, but then when his owner takes him to meet a Hollywood agent, he just says, “Ribbit?”

This guy was kinda like that. The opening line, that I now strongly suspect was lifted from a more clever clown counter-part, was so solid I was fully excepting a tour de force of politically incorrect hilarity. But the guy pretty much, well, ribbited.

This is mostly non-applicable because my mom wouldn’t want me to date a clown….or maybe she would, because it means they’re employed. Anyway, I picked this pick not because of the clown, but because of the convertible. My mom lives in Michigan and she’s always complaining there’s not enough sun and she’s worried about her vitamin D levels.

Approach/Chat Up Line: Having sex in an elevator is wrong on so many levels.

Closing Skills: My mom’s coming in next week, so he’s taking us to The Olive Garden.

Approach/chat up line: "I think I smell like my mother."

Sleep well my beauty, I'll be right here when you wake up....

Approach/Chat Up Line: Can my dancing poodles watch? Honk honk!

His name was Mark but he insisted on being called Marcus, so already I’m annoyed, but I rolled with it, as I wasn’t as interested in getting in Marcus’ clown suit as I was getting in his head.

Over pizza at Happy Endings, Marcus explained to me that after graduating from Clown College he became a marketing exec at Perdue Chicken but continued to “clown” on the side.

He insisted that he didn’t have a clown fetish, but did have a cat o’nine tails made of rubber balloons in the back seat of his Honda Accord, a decidedly un-clown car. I mean, you could barely fit 6 of the funny guys in there.

Anyway, Marcus did confess to having a fetish that he more than likely developed at Clown College. (I’m not even sure if I’m supposed to capitalize “Clown College.” I think I am. ‘Cuz there’s only one, and it’s in Florida, of course.)

During his drunken and decadent formative years at CC, Marcus’ sexuality became entwined with balloons and a fetish was born. He likes to watch hot chicks pop balloons because the anticipation before the pop is comparable to that before reaching orgasm apparently.

In return, he requested that after dinner, I indulge his fetish. Just once.

I was conflicted. His proposition was in no way sexually compromising, but the act itself seemed a little off kilter to me at the very least. Surely there is discomfort accompanying that thunderous popping sound? Still, I was relieved that his request didn’t involve my rectum. Or feature the word “midget” or “gang bang.”

But, what if he found my popping performance satisfactory? Would he then want me to "paint his horn"?

But I did do ungodly things with his rubber chicken.

It made me log back on to Farmer's Only to see if I could re-instate my membership.

That, and I just think it’s weird that, in light of the fact that clowns love puns so much, and that the clown fish is an actual fish, and “fishing” is a dating colloquialism, they would have come up with some kinda clown/ fish pun.

That’s where Clown Passions comes in, so that these lost souls might some day find someone, somewhere, that is willing to paint their horns for them.

Check back on Popdust every Friday for all new Adventures In Dating…next week—Ashley Madison...