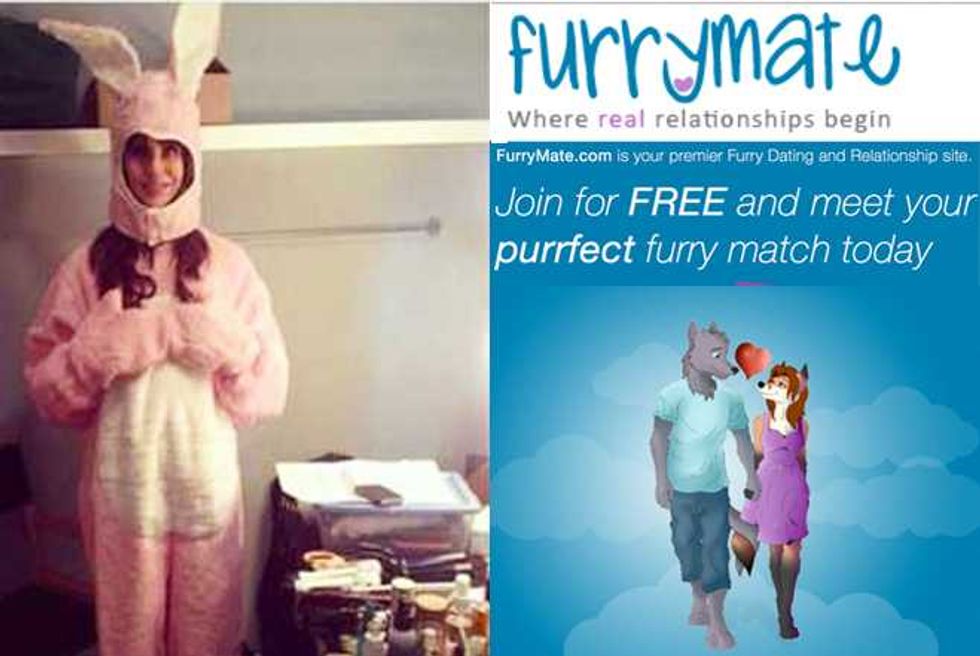 This week, we shine the spotlight on FurryMate.

Because I engaged in some kinky pre-pubescent sex play with the life sized stuffed polar bear I won at Bush Gardens, I figured I would take to Furrymate like a beaver to a water-based eco-system.

However, I discovered shortly after perusing the site, that I had not been a furry at all. I had actually been a Plushie.

More fascinating still, during my week on FurryMate.com, I uncovered a bitter rivalry between the warring fragments that are the plushies and the furries.

Plushies, you see, like to have sex with stuffed animals—while furries like to embody the animal themselves, then have sex with other like-minded weirdoes dressed in the animal of their choice.

Furries look down on Plushies, as they have not fully committed to the furry lifestyle. It’s like the Crips and the Bloods.

I learned this and so much more.

HOT TO NOT RATIO: Just...don't even

BEST PICK UP LINE: "Is that your tail between your legs or are you just happy to see me?"

WORST PICK UP LINE: "I've got this knot I can't work out.. could you give me a paw?"

NUMBER OF CORRESPONDENCES IN ONE WEEK: 44

Furrymate encourages each member to describe their furry lifestyle, and they seem to have their own language. Like, what the hell is 'realism'? Something that people who dress like Teletubbies and live in their mother's basements are not qualified to comment on.

"Realism refers to whether or not your animal is found in nature," explained my Furry date. "Or if it's something more fantasy based. Like a tiger as opposed Cheetara."

So a furry fetish is not a sexualization of animals per se, but mainly of the characters depicted in comics, video games, movies, etc.

Approach/Chat Up Line: “Welcome to the jungle.”

Conversation Skills/Rapport: Spoke mainly in “meows,” and, based on the quality of the meow, I was supposed to deduce the intention behind said meow and converse thusly. Fuck this guy.

Closing Skills: I used to love him but I had to kill him.

Appears to have his own home, wave seems to indicate a genial disposition...

Approach/Chat Up Line: "Are your parents retarded? 'Cuz I find you really special."

Conversational Skills/Rapport: Totally went on a date. See below:

Closing Skills: We almost came to blows, and not in a sexy way.

He’s not even furry… wtf?

Conversation Skills/Rapport: What kinda half-assed, phoning it in bullshit is this? Just because you’re wearing a pattern of something that has fur, doesn’t make it furry. There are no spandex Dalmatians. And pick a fetish. Are you into camo-porn or furries?

Closing Skills: If he can’t commit to a fetish, how can he commit to me?

His Approach/ Chat Up Line: "Panic" referred to himself in the third person, which obviously gave me raging wood. "Panic is a foxy dude who likes to party and hear to rock music. He also likes to play video games and drink energie drinks. Hes a quite friendly guy who will give his heart and all the love to a nice girl."

Closing Skills: Panic is definitely a closer. At least maybe with that stuffed sheep dog in the back ground.

So Matt didn’t own his own home at all, and his disposition wasn’t all that genial. His mom, however, owned a lovely little ranch-style home in West Covina and the basement had its own entrance.

We met, plain clothed at Red Robin, which he insisted were the best burgers in town, and forced our way through small talk until we came to the matter at hand.

And, erupted into a seething cauldron of debate when I said that Cheetara was hotter than Gadget Hackwrench, and it was clear that his tail would never make it between my legs.

“Are you out of your fucking mind,” he railed before catching himself and taking a long slurp of his Freckled Lemonade.

“Well, at least from a classical stand point,” I tentatively countered. “I mean, I guess it’s sort of like the Ginger/Maryann debate.”

“She is the divine being, the most unadulterated and majestic child of the God on Earth. She is strict, adorable, cheerful, and her level of technical knowledge is incredible for a mortal being.”

“But Cheetara has such... big boobs.”

Wrong answer. Matt’s antennae began to twitch, and he wasn’t even wearing his costume. I knew then to back off, and we sat for the remainder of dinner in silence, in much the same way I imagine animal couples do.

We split the check, and he unmatched me shortly thereafter.

From an evolutionary stand point, beauty unconsciously signals human-ness to other humans and essentially allows us to differentiate between the animal and the human—so furry fetishism goes against nature, but then again, so do Hot Pockets, and those are awesome.

Check back on Popdust every Friday for an all new foray into the singles world…next week—Fetster….

In the meantime, you can read past Adventures In Dating here