Backstreet Boys' "I Want It That Way" Lyrics Analysis: Which Way Is It, Exactly? 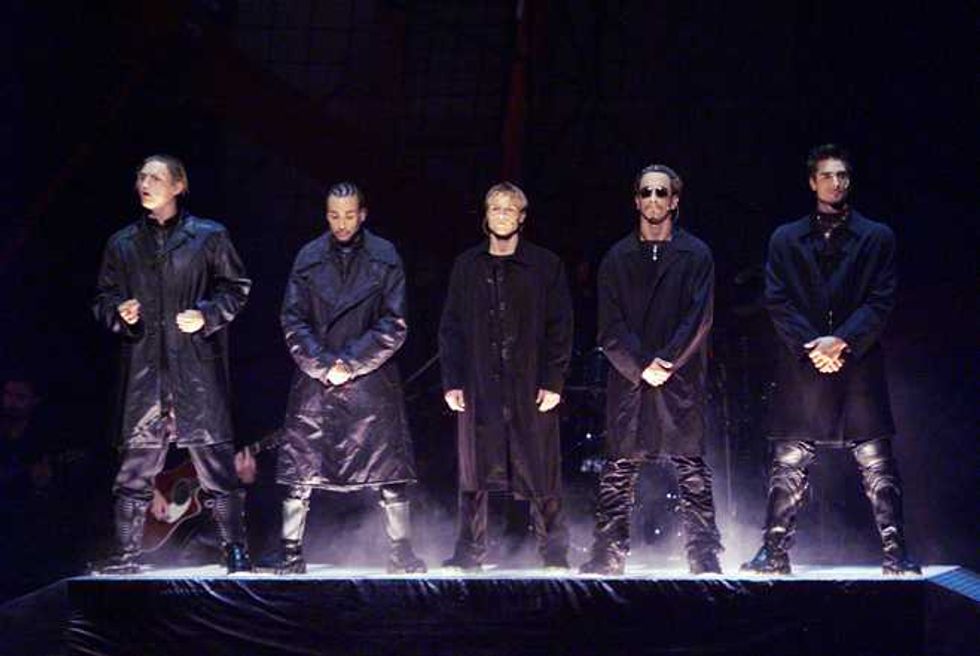 Quick question for you: What is the Backstreet Boys' "I Want It That Way," one of our Greatest Boy Band Songs of All Time contestants, about? Don't bother prepping a whole essay on the subject or anything—we'll have that covered for you soon enough—but if you were to summarize the lyrical content of "I Want it That Way" in one sentence, how would you do it? Would you be able to do it at all? Would you have to sing through all the lyrics to yourself first? Even if you know all the words by heart, have you ever actually stopped to consider what they mean? And perhaps most importantly: Do you have any clue what "That Way" is?

Songs as popular as "I Want It That Way" don't usually traffic in ambiguities. When it comes to pop megahits, 99% of the time, big and obvious is the name of the game—you want your song to be easily digested by as much of the population as possible, so why risk alienating your audience by making your song difficult to understand? What "I Want it That Way" does is to sacrifice obvious coherence in favor of lyrics that sound good and strike as instantly memorable, even if they don't add up to a clear thesis statement, and trusts that the melody and emotion of the song will be enough to get the point across. Does it work? Well...do you still remember all the words to the song?

You are my fire

Believe when I say

I want it that way

"I Want it That Way" was co-written by Max Martin and Andreas Carlsson, who between the two of them were at least partly responsible for just about every big hit of the TRL era, including Britney Spears' "Baby One More Time," 'N Sync's "Bye Bye Bye" and previous BSB hits like "As Long As You Love Me" and "Everybody (Backstreet's Back)." Needless to say, the two of them knew what they were doing when it came to pop songwriting.

What they didn't necessarily know all that well was the English language. In an interview on the subject of "I Want it That Way" (aptly titled "What The Hell Is Backstreet Boys' 'I Want It That Way' About?) in LA Weekly, Backstreet Boy Kevin Richardson said that back in the late-'90s, the Swedish-born Martin barely spoke the language: "His English has gotten much better, but at the time..."

A fractured sense of English certainly contributed to the unique lyrics of "I Want It That Way," both in terms of the fact that the song doesn't make a whole lot of sense—more on that in a minute—and in the odd phrasing of the title and certain other key lyrics. A line like "You are my fire" doesn't really mean anything in itself, and a more conventional songwriter would've probably stuck a few more lyrics in that phrasing to make for a more pronounced sentiment, like "Your love is hot like fire" or "Your love burns in me like fire." But achieving lyrical clarity isn't as important to Martin and Carlsson as eliminating lyrical clunkiness, so they leave it as "You are my fiiiiire" because they like the way it sounds in conjunction with "The one de-siiiiire," and hope that you'll get the idea that it's about love and stuff. (Chances are, you will.)

The phrase "I want it that way," which ends not only the song's opening stanza but every subsequent stanza throughout the song (including in the chorus), is similarly devoid of inherent meaning, but it's used recurringly as a kind of conclusive phrase, always calling back to those first two lines, as the song gets gradually more despairing in nature:

'Coz we are two worlds apart

Can't reach to your heart

That I want it that way

Am I your fire?

Yes I know it's too late

But I want it that way

The "I want it that way"s serve as connectors between the verses, always referring back to the happiness and warm feelings (no pun intended) of the original verse and its "fire"/"desire" feelings. But as the song goes on, it becomes kind of a bummer, as what seemed to start out as a wedding-type eternal-love declaration is troubled by distance—probably geographical, more likely emotional, but troubling enough that it's already seen as "too late" for the relationship. Still, at least there's the original fire and desire keeping things together. making for a powerful message of passion overruling (or at least battling) practical difficulties.

But then, the chorus throws a wrench into things:

Tell me why (Ain't nothing but a heartbreak)

Tell me why (Ain't nothing but a mistake)

Tell me why (I never want to hear you say)

I want it that way

The chorus would appear to be in direct opposition to the rest of the song. The first two lines, addressing the love in question as a "heartbreak" and a "mistake" are in line with the progression of the verses until that point, but you'd expect it to then lead to another sort of "even still, I want it that way" conclusion at chorus's end. Instead, you get the group rebuffing the song's recurring refrain entirely, declaring that they hope their beloved never makes the titular declaration.

What's the deal? Why would you spend all of a song's verses establishing wanting it That Way as the song's emotional hook, only to sell it out entirely in the chorus? Is it some kind of unforeseen plot reversal, meant to reflect back on the entire song? Is it BSB realizing that the relationship just isn't going to work, and hoping that their girl will be able to move on? Is it supposed to be from another perspective, or the sound of subconscious doubt, or some other kind of narrative twist?

Nope—it's just pop songwriting. Carlsson himself has acknowledged that some of the verses "made absolutely no sense in combination with the chorus," but that "everyone loved it," including the group's label, who thought it an "all time classic." In that same Kevin RichardsonL.A. Weekly interview mentioned earlier, Richardson agrees, saying "Ultimately the song really doesn't really make much sense." There's no deeper meaning here, just a low priority on lyrical coherence.

So if the lyrics don't make sense, why are they even there? "There are a lot of songs out there like that that don't make sense," Richardson theorizes, "but make you feel good when you sing along to them, and that's one of them." Surely is, and the point is driven home by an existing alternate version of the song with more coherent lyrics—a much simpler love song, with a much more comprehensive chorus:

No goodbyes (ain't nothing but a heartache)

No more lies (ain't nothing but a mistake)

I love it when I hear you say,

"I want it that way"

Makes more sense, doesn't it? But here's the thing: The song isn't as good. The verses feel overstuffed and ordinary, and the chorus isn't nearly as satisfying. When Nick Carter wails "Don't wanna hear you SAYYYY!!!" leading into the song's climactic key change—one of the greatest moments in pop music history, incidentally—it just doesn't feel the same, because it doesn't have that stupid "I never wanna hear you say" chorus line to build off of. And generally, the song just feels too busy—it makes you realize that the beauty of the famous version of "I Want It That Way" is in its sparseness and simplicity, the fact that it has very few unique lyrics and that the lyrics build off each other musically, if not necessarily narratively.

So what is "I Want It That Way" about? Well, it's about a relationship that's troubled by matters of emotional and/or physical distance, but that the singer feels strongly enough about to keep it going just the same...until the chorus, at which point he decides that it's not worth the trouble. No, it doesn't make sense, but it's still stirring, beautiful in its own weird way, and undeniably unforgettable. And frankly, we wouldn't want it any other way.