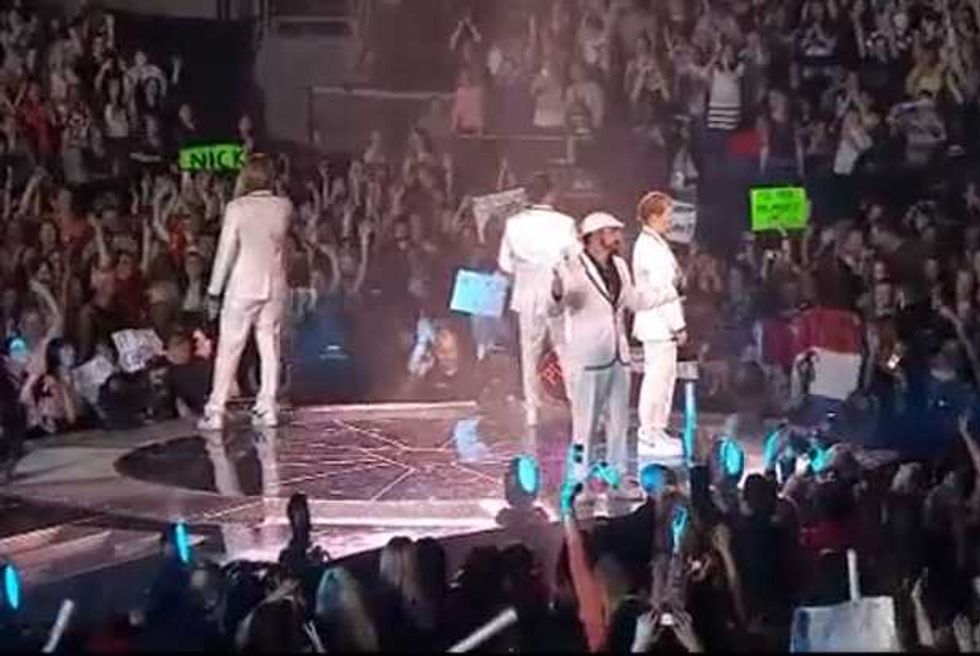 The Backstreet Boys-New Kids On the Block supergroup performed at London's O2 arena over the weekend, letting members of One Direction and The Wanted know that anything is possible—even after 25. During BSB's solo set, the four performers—soon to be rejoined by the tall, dark and handsome one—set out to prove their love for the hometown crowd and the male performers they helped paved the way for by playing One Direction's "What Makes You Beautiful." Perhaps it was just the audio engineer's chance to find the backing tracks for a classic like "I'll Never Break Your Heart," or the fact that the O2 has kept 1D on hand for any and all events since early 2011, but the sounds of the 2012's group du jour filled the massive stadium just as Backstreet entered the crowd, searching for lucky fans to bring up on stage. (Niall approves!) A a surreal moment of boy band serendipity if there ever was one. But if you're going to tempt us with that song...

The fan serenade is always the teensiest bit awkward, isn't it? Thankfully the lyrical knowledge of these ladies helps cure any sense of discomfort. A lot has changed since this original video yet we find ourselves feeling verklempt all over again even, if we know the majority of these guys are married with babies on the way. But simulating a marriage proposal? Now that's just cruel. At least Nick is generous with the cheek-kissing (paving the way for yet another male heartthrob of today!). Watch below.

Crain's Detroit Business September 4, 2000 | Smith, Jennette A new daily newspaper serving Livingston County readers is poised to roll off the presses Thursday, marking a milestone for the community and for Michigan's journalism industry.

It's part of the HomeTown Newspapers chain, a subsidiary of HomeTown Communications Network Inc., based in Livonia.

``There's such an explosion of retail growth that it pretty much pushed the issue,'' he said.

The new daily bucks the industry trend toward fewer dailies. The Editor & Publisher International Year Book for 2000 showed 1,483 daily newspapers in the United States as of February. That's six fewer than in February 1999. Ten years ago, there were 1,611 dailies. website livingston county news

In Michigan, the newest daily appears to be the Huron Daily Tribune in Bad Axe, which began publishing on a daily basis in 1955. Michigan dailies that have closed through the years include The Ypsilanti Press and the Detroit Times. The Daily Press & Argus replaces two newspapers that date to 1843 and 1880, although ownership has changed several times.

The newspaper will begin with a paid circulation of more than 20,000. It will be an afternoon paper Monday through Friday with a weekend edition delivered Sunday morning.

Perlberg said current subscribers would receive the new daily at no extra cost for a trial period. HomeTown will do some free sample deliveries to prospective readers.

The paper will focus on local news, he said, although it will include Associated Press stories on state, national and international news and will carry comics, a TV book and other features. The full-page advertising rate is about $2,000, Perlberg said.

HomeTown publishes 70 weekly and twice-weekly newspapers in Michigan, Ohio and Kentucky. The Livingston paper is the company's first daily.