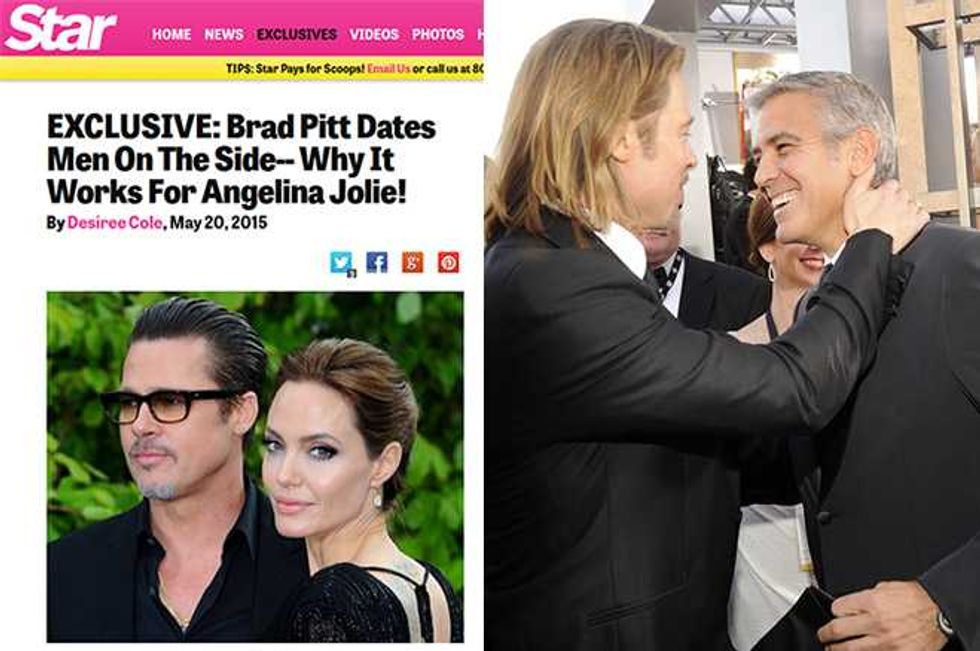 In the same week that George Clooney talks about his best prank on Brad Pitt, a tabloid headline alleges that Brad is bisexual. Should Amal and Angelina be worried?

George spoke about Brad to UK talk show host Graham Norton, revealing his fear of taking a prank too far. He had used stationery bonded with Brad Pitt’s name to write to stars 'on behalf' of Pitt. He boasted that the fake letter he's currently working on could get him arrested.

I’m doing one now that I can’t tell you about but in a year you are going to hear I’ve been arrested — I’m not kidding because I think I’ve crossed the line. It’s exciting. But, I have a wife, she’s a barrister, I’ll be fine!

Meanwhile, The Star has announced on its cover that Brad 'dates men on the side' and it's okay with Angie.

Wow, right? What a game-changer!

So now we know Brad is bisexual, because the headline says so, we can only wonder how we missed this.

Is George Clooney trying to tell us something about his 'friendship' with Brad Pitt? Is it no coincidence that both men married brunette activist women whose first names being with the letter A? Are they actually a ménage à quatre?

The possibilities are endless. I just hope we can believe the headline, because it's a little funny how all those pregnancies Jennifer Aniston has endured have yet to result in one single baby!