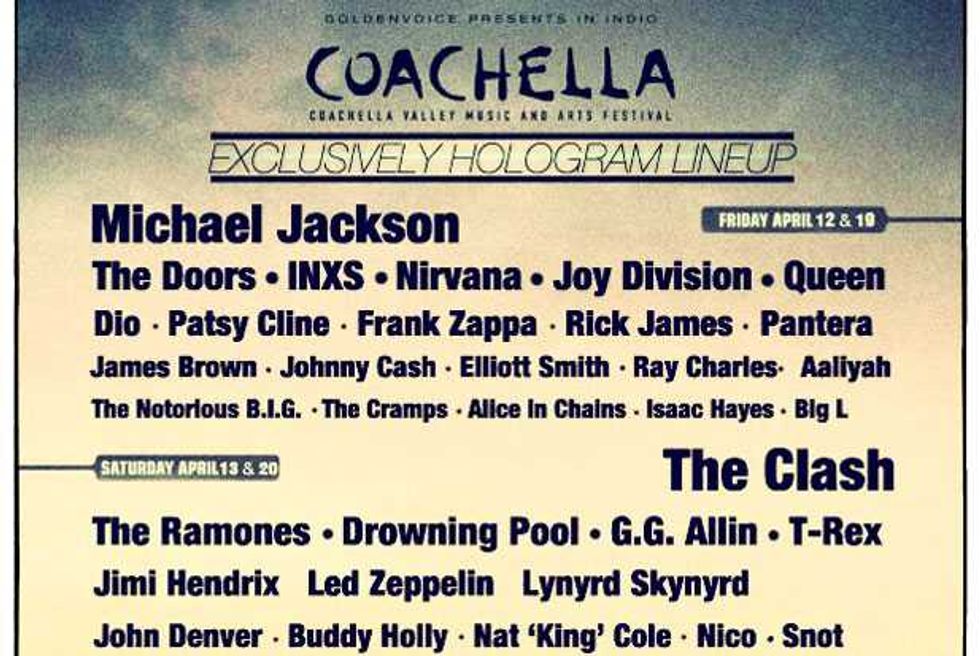 The Coachella poster's been thoroughly parodied by now, but every year gets the parody it deserves. Last year, we had the duded-up Brochella, but that's no longer news in this year of arena EDM and brostep and Fred Durst having a record deal again. We all know what the big Coachella story is. Now it's a big Coachella meme, too:

Guys, half of this stuff's already happened. A third of these bands have reunited, albeit not in their original lineups. Michael Jackson's given a hologram concert already. And it's been decades since the Beatles established that they're bigger than Jesus. But do you think the ghost of Biggie, or the ghost in the Biggie machine, or however we're going to ontologically define this hologram fuckery, is happy about being so far down on the list? Would Tupac be that tiny? Where's the holographic Nate Dogg we were promised? Couldn't they exhume any dead electronic artists? And oh man, can you imagine the tabloid hijinks that hologram Mozart would get up to? These are serious debates that we seriously must have now!

Actually, no they're not. In 2013, the audience will all be holograms too, and us writers will outsource the reporting and wisecracks to our hologram doppelgangers while we fester inside underground bunkers or the Matrix pods or something. It doesn't take a computer brain to predict that.