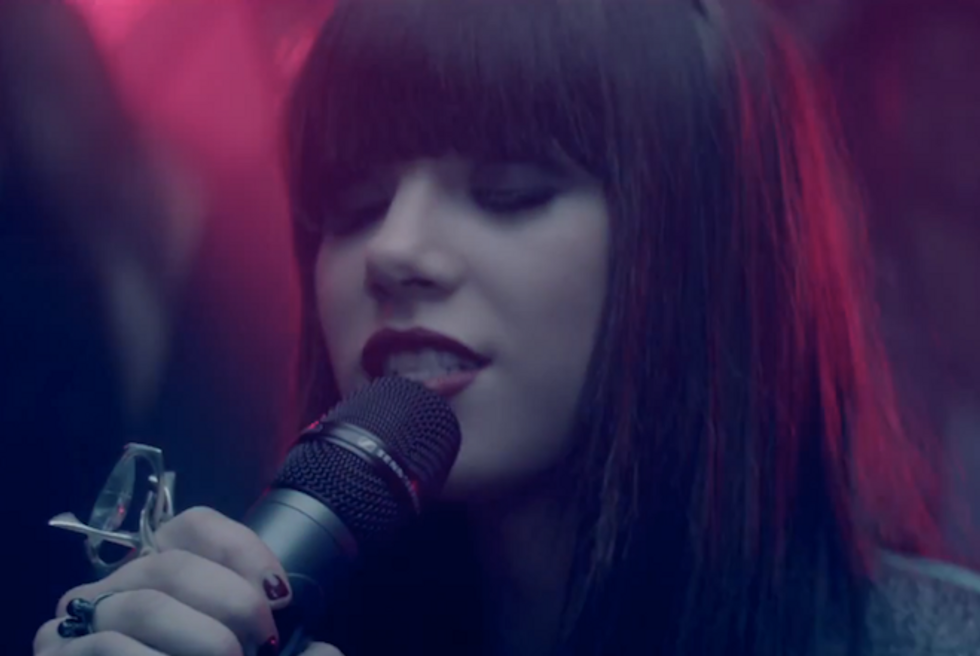 We've already seen what it's like when Carly Rae Jepsen parties with Owl City (everyone drinks slushies in the woods, apparently), but what is a night on the town with just Carly Rae and her girls like? Well, the preview video for "This Kiss" wasn't lying: When you go out with CRJ, you've got to be ready for anything—including the world's creepiest game of Suck and Blow.

Carly and her gaggle of girls are headed to a party, in what looks like some sort of warehouse district. Is Our Girl a closet hipster? Sure looks like it! In retrospect, the pants should have tipped us off.

But soft! Our heroine has caught the eye of the chapeau'd gentleman on the right. His partner's getup suggests the video's action takes place at some sort of costume party—is Carly Rae's paramour going as The '90s? If so, doesn't he know this is her '80s song?

We're inside now, and look, another '90s reference! Suck and Blow was cute back when Cher and Elton played it, but here, with those animal masks, it's just creepy.

The warehouse party also has a bizarre photo-booth concept. Pay attention, this will be important later.

In a crucial departure from the song's lyrics, the video for "This Kiss" cuts out both Carly's crush's girlfriend and Carly's own cuckolded friendboy. There will be no cheating in this warehouse!

We gotta say, we liked the dude from the "Call Me Maybe" video better.

But Carly seems into him enough in this dramatic slow-mo shot.

But now we're back at the photo booth! The camera's not working, so CRJ whips out her handy iPhone and snaps her friends with that instead.

The crush guy, though, is a little more puzzled by the whole thing.

But that's OK, because Carly and her gals have moved on. Were you aware this is her '80s song? If not, these outfits should do it.

But finally, Carly's suitor is so enflamed with lust at the site of her '80s getup that he finds a way to get her alone. Without the hat, he looks good! Kind of like a long-lost Hanson brother. What will This Kiss be like?

Surprise—it's an underwater kiss! That Carly Rae, she always know how to give a good twist-ending.