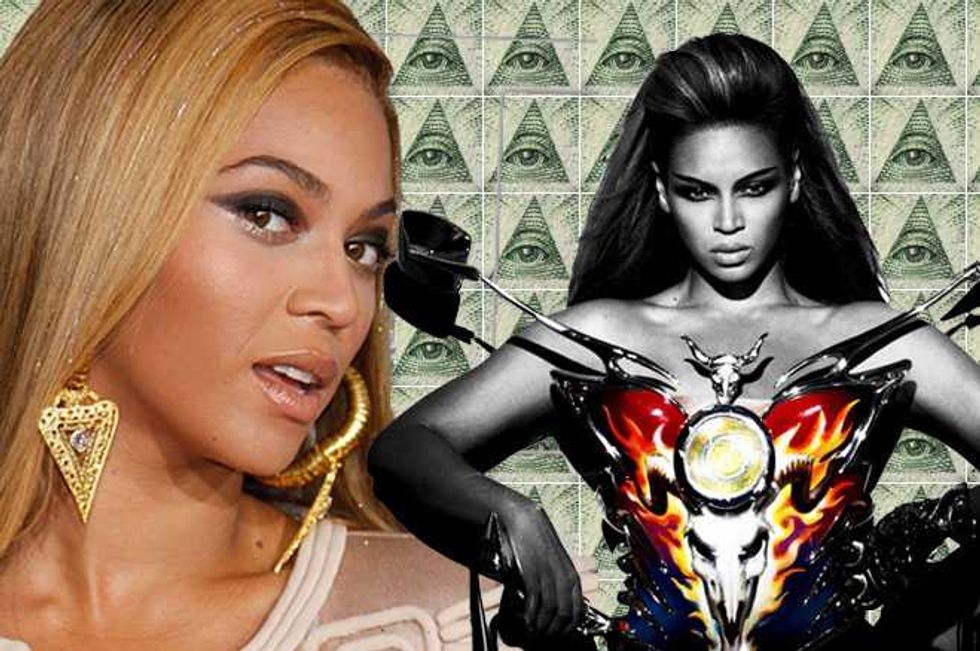 There have been rumors and accusations for years about the existence of the Illuminati in Hollywood, and particularly about Beyonce and the Illuminati, and how she sold her soul for fame and fortune.

The Illuminati was originally started in 1776 in Europe, and it's original aim was to form a group of the intellectual and political elite members of society.  Despite attempts by Rulers in Europe to break up and ban the group, many conspiracists believe that it still exists today.

They claim the term 'Illuminati' is used for an elite bunch of people who plot worldwide major events and control world governments and corporations from behind the scenes in order to bring in a New World Order to power (the belief that only one government or ruler should control the entire world).

The group are also said to be anti-christian, involve evil, possession and subliminal suggestions and were responsible for the deaths of members Michael Jackson and Whitney Houston, who were ex-members about to reveal their dark secrets.

There is a common belief that Hollywood has been infiltrated, and in particular there is talk of a massive Illuminati presence in the music industry—concentrating on rap and black R&B artists.

So what about Beyonce and the Illuminati?

The theory is that the power couple that is Beyonce and Jay-Z are very strong supporters of the Illuminati and that Beyonce in particular is a figure head for the group in the music industry, and that her rapid rise to success was down to the group.

What's the basis for theory? Here's the alleged "proof"

"Through symbolic scenes, we first see Beyonce walking towards a speeding car (with Jay-Z in the backseat)...Beyonce loosens up her hair to prepare herself and gets on a stage to begin initiation, symbolized by sexual dance moves.  She then reaps the rewards of the selling of her soul with fame and fortune.  Next, she is emulated by young girls who copy her dancing style.

In the final scene, the good Beyonce gets literally blown up while sitting in the backseat [of the car].  After the explosion, Sasha Fierce magically appears next to Jay-Z looking sexy, yet devilish.  In his verse, Jay-Z refers to Beyonce as 'Young B' because she was just reborn."

Is all this a coincidence or proof that Beyonce made her deal long ago and has enjoyed the benefits of her association with the Illuminati?

From Your Site Articles
Related Articles Around the Web
bechdel test