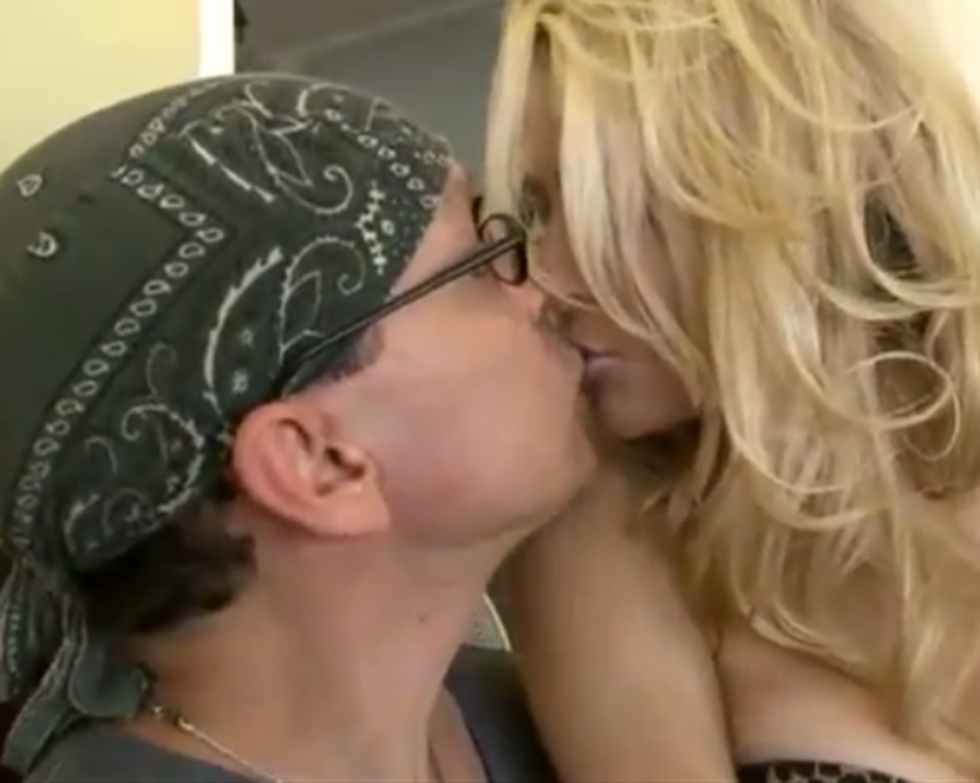 While we're arguably more interested in analyzing the horribly DIY nature of the music videos by 16-year-old bride Courtney Stodden, the fact that her marriage to 51-year-old actor Doug Hutchison required parental consent still fascinates us. (Sorry!) After the announcement of their union led to outrage, death threats and nearly a month of web speculation about Stodden's true age and real breast size—with no defense from the couple themselves—Mr. and Mrs. Hutchison broke their silence with an appearance on Good Morning America Friday, again bringing "their story" to the forefront of our weekly news cycle. (In the name of "truth," sure, yet perfect timing considering Hutchison was recently dropped by both his manager and agent.)

In the interview segment below, the couple insists they're just your average pair of May-December newlyweds, who start each morning by taking leisurely dog walks and sipping coffee in their leopard bikinis. They also extrapolated on how their relationship came to be, in attempts to prove all the naysayers who believe this is some sort of perverted kidnapping scenario gone wrong. As a student of Doug's acting workshop, the two engaged in lengthy Internet correspondence for four months before they even met. "I'm telling you it was a really beautiful and unique way to get to know someone because we didn't have the distraction of the physical," Hutchison explained. While these exchanges may have been filled with heavy flirtation (or just rounds of SAT vocab prep? That's what we were doing at 16, anyway) every email was read by Courtney's mother, which kept things relatively PG and further proves that Mrs. Stodden takes the Gilmore Girls meets Mean Girls approach to raising a daughter. If it wasn't uncomfortable enough for her mother to explain the virginity issue the first time around, Courtney and Doug offer some reinforcement on the subject. "I was a virgin when I met him. I knew that if I kept that I would really be blessed with a beautiful gift, and God did. He blessed me with my soulmate," said the "deeply" Christian girl. And finally, for the those who are caught up in her shockingly older appearance, this 16-year-old is real. "Courtney's plastic surgeon was God," Hutchison said. The more you know. (Is it hard to get appointments?)

While Stodden has received some attention for her singles, and likely one or two more clicks on her YouTube page after news of her marriage hit the web, the self-described old soul swears she's not looking for Doug's fame (or, "fame") to help launch her career. But if that happens, well... "That's just another beautiful blessing that God hands to me," she said. "But If I'm just with him for the rest of my life and supporting him, that would make me happy to." So don't sweat getting dropped, Doug. Wifey's got you covered. May there be a Lifetime movie inspired by your union as well as a hit reality franchise in your futures.