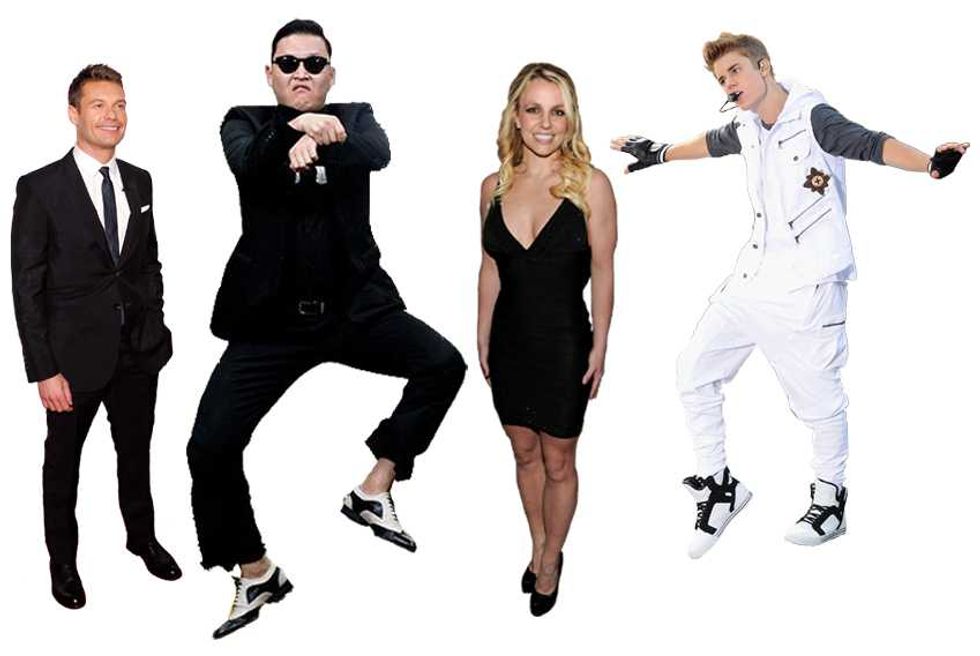 The day in music as told by tweets. It's not often music news is literally out-of-this-world. When it was announced today that  a will.i.am song will enjoy its debut live from Mars, it certainly piqued our Curiosity (SWWDT...?). Meanwhile, some of the biggest musical tweeters have been inquiring about how to get into (the non-literal-out-of-this-world) Gangnam Style. Opa!

Send your funny music-related tweets to @HiMyNameSam. They could be in our next Tweetcap!

Vote for PSY in this week's Pop-Off!

I am LOVING this video - so fun! Thinking that I should possibly learn the choreography. Anybody wanna teach me?!haha britspears.me/159zje

While They're Stanning for PSY...

When I realized I was shaking Anna Chlumsky's hand last night I froze. I watched My Girl everyday when I was younger! Totally had a moment!

While You're Stanning for Ed...

Watching YouTube videos of people covering my tunes, I love that so many talented people wanted to sing these songs. Thank you x

We Always Wondered Why She Looked So Familiar...

someone seriously just said "DO U KNOW WHO U LOOK LIKE" so I kinda rolled my eyes and said "WHO" they said "AN ANIME CHARACTER!" haha omg!

The Men Of Bieber's Life

@jeremybieber welcome back. bum knee and all

Still unpacking all these clothes. Ahhh this sucks. Times when I need a girlfriend to help. Lol...

To say thanks, we will drop a new video when we get to 1 million #GetRizzleKicksTo1Million

And for the record, this hashtag malarky is our manager. We're quite happy to progress naturally past a million followers haha

Wait, our manager very rarely tweets on here. It was just Harley. Sorry this was discussed publicly. That hashtag's awesome.

And Speaking of Self-Promotion

How Weird Al Seas It

Sure dolphins are smart, but they’re mostly just FISH smart.

Never see a therapist u are attracted 2...you will never tell them the truth.

I Just Ate A Bowl Of Waffle Crisp And Realized I Can Buy A Shit Load Of Them, Life Is So Awesome. — Tyler, The Creator (@fucktyler) August 28, 2012

And, Finally, Your Daily Affirmation c/o Lil B:

POWER TO THE WOMEN AND GIRLS WORLD WIDE!!! LOVE THE EARTH AND HUMANS! - Lil B