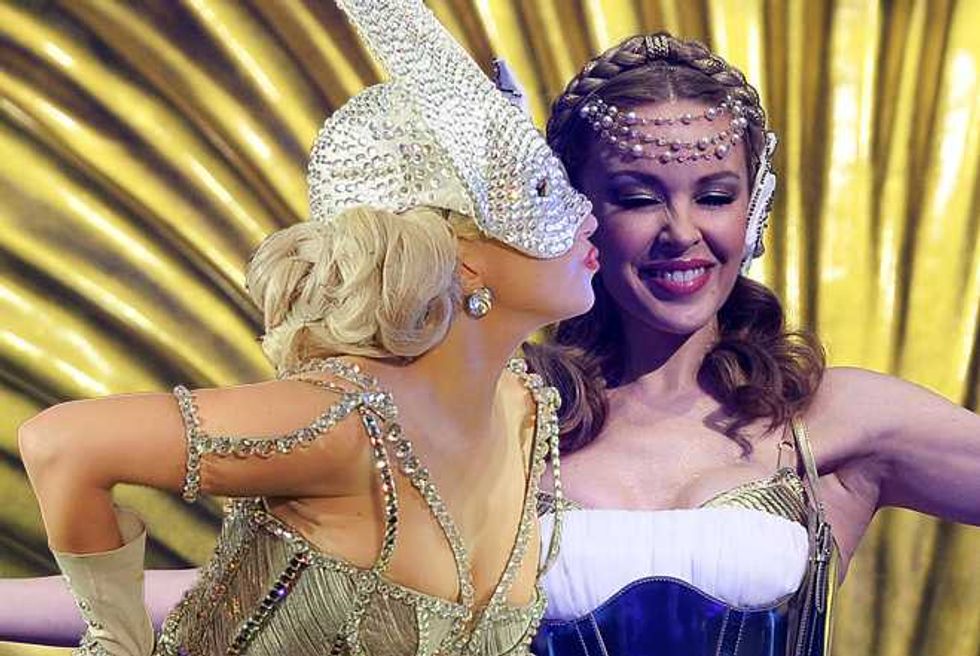 The day in music as told by tweets. Twitter was simply bursting today with unabashed expressions of girl power (and we certainly have an idea of who's to blame). After a veritable freakout, it's safe to say Lady Gaga is a Kylie stan.

As for the boys, it's all video games and football and gettin' high. Why, oh why can't they evolve at the pace of music's X chromosomers?

getting majorly flogged by queens of the ball, just arrived at venue HAD NO CLUE KYLIE TWEETED ME, BEING SMACKED BY MY AUSSIE SEAMSTRESS

@Kylieminogue if it wasn't for ure tour, i wouldnt have had to pay so much to build this MASSIVE stage. Thanku for being a supportive female

"@missyelliott: @officialchilli chilllllllllly where u been sis??? Miss ya! I'm gonna call u in a few"( my sis from another mother!)

oh n dude @samantharonson I had the best time with u last week. my god this girl is a genius!! I knew that but really, youre something else

Been to 7 radio stations so far today. I've requested Call Me Maybe at every one of them #anthem

Woke up about to do some P90x... oh wait theres 80s spiderman cartoons on? Nevermind gonna eat cap n crunch and watch that. — Pete Wentz(@petewentz) August 21, 2012

And Girls Will Still Be Girls...

One Direction Gets Uber Coy

guys, can't wait to let u all know the news. Only a few dayssss to wait

And If You Were Looking to Feel All Warm and Fuzzy...

'If you're reading this congratulations, youre alive, if thats not something to smile about, then I dont know what is.'

"All your dreams can come true if you have the courage to pursue them." - Walt Disney

AHHH LOOK AT YOU!! (LIL B POINTING) YOU LOOK AMAZING TODAY AND YOUR AN AMAZING PERSON!! IM SO HAPPY YOUR ALIVE TO READ THIS I LOVE U - Lil B

If ur a young hustler on the come up, u must have confidence that ur hard work, dedication and faith is going to pay off.