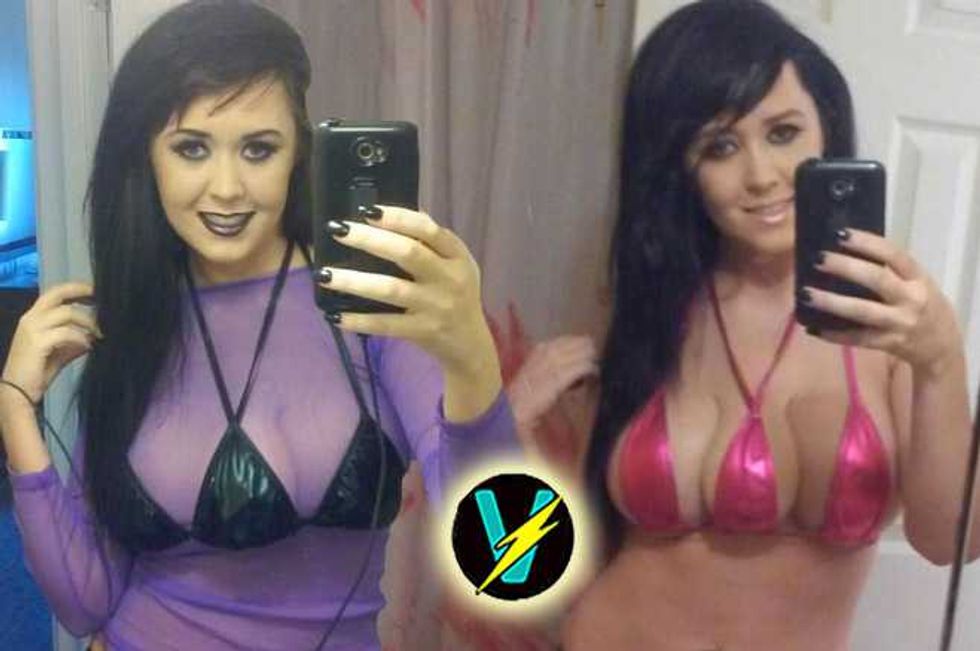 Jasmine Tridevil, a 21-year-old massage therapist, alleges she spent $20,000 on the surgery—which has yet to be verified as being real—telling Orlando's Real Radio 104, that she has hired a film crew to follow her around and document the “struggles she faces as a three-breasted woman.”

HAHAHAHAHA!!!!—If true, this could be an even bigger train wreck than LeAnn and Eddie!

Tridevil explains she was turned down for the procedure by more than 50 doctors before finding one who didn’t give a shit about violating ethical codes—claiming she was forced to sign confidentiality papers to keep the surgeon’s identity a secret, before he carried out the operation.

Tridevil has been proudly showing off the alleged results of her 20 grand investment on social media, posting a slew of bikini pics on her Facebook page and building up her fame quota with the use of hashtags such as #3Boobs.

And, she’s aiming BIG when it comes to her desperate bid for reality TV fame! Tridevil says she is channeling every penny she has into producing her reality show pilot, named Jasmine’s Jugs, with the hope MTV will snap it up.

“My whole dream is to get this show on MTV,” she says. “I’m dumping every penny I have into this. If this doesn't work, I'm through.”

But, what price fame? Well, Tridevil has already bravely sacrificed her relationship with her mother and sister in her pursuit to be the next big fame ho. Claiming they disowned her after seeing her Franken-tits.

There is some good news though, Tridevil says her dad is “kind of ashamed” of her, but has “accepted it.”

Meanwhile, the 21-year-old claims she underwent the procedure because, “I wanted to make myself unattractive to men. Because I don’t want to date anymore."