She wrongly accused Spielberg for being sexist in his casting

"I want to be clear from the start that I take full responsibility for what I said and I'm sorry," she wrote.

The actress Elizabeth Banks has apologized to Steven Spielberg after she "called him out" in public for something that wasn't true. The star made the comments at a Women in Film awards ceremony on Wednesday. She apparently thought Spielberg had never directed a film that featured a female in a lead role. She must not have seen The Color Purple.

Actress Shari Belafonte called out from the audience Spielberg had directed the 1985 film The Color Purple, starring Whoopi Goldberg. But after another audience member yelled it was wrong, Banks believed she was still correct.

"When I made the comments, I was thinking of recent films Steven directed, it was not my intention to dismiss the import of the #TheColorPurple. I made things worse by giving the impression that I was dismissing Shari Belafonte when she attempted to correct me. I spoke with Shari backstage and she was kind enough to forgive me," Banks wrote.

"Those who have the privilege and honor of directing and producing films should be held to account for our mistakes, whether it's about diversity or inaccurate statements. I'm very sorry" her statement concluded.

The Hunger Games star and Oscar winner for Leaving Las Vegas was awarded an excellence in film prize at the ceremony and used her acceptance speech to highlight gender equality in Hollywood. "We can't do it by ourselves... It's our responsibility to bring the men along," Banks said.

"I went to Indiana Jones and Jaws and every movie Steven Spielberg ever made, and by the way, he's never made a movie with a female lead. Sorry, Steven. I don't mean to call your ass out, but it's true."

After Belafonte reminded Banks of Oscar-nominated movie The Color Purple, the actress initially corrected herself. "OK... I'm wrong. Ummm… he directed?" she queried.

Another guest mistakenly called out no, so Banks concluded: "Oh, so I'm right still," and moved on. The error was much talked about all over print and the internet. 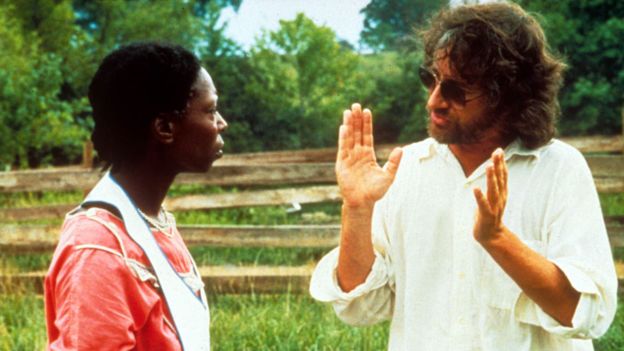 The Color Purple was based on the 1982 Pulitzer Prize-winning novel by Alice WalkerSet in rural Georgia, tells the story of oppressed African-American girl Celie It addressed themes of racism, misogyny, equality and domestic violence. Nominated for 11 Oscars, including for Whoopi Goldberg (best actress) and for Oprah Winfrey and Margaret Avery (best supporting actress), - but surprisingly didn't win any. It still stands as perhaps the most iconic roles for Oprah and Whoopi.

Banks posted a lengthy apology on Twitter on Thursday, saying she "framed [her] comments about [Spielberg's] films inaccurately".

Since Banks's error, others have pointed out that while she was wrong in her claim about Spielberg, the director has only helmed three films out of his 30 which feature a female lead. In addition to The Color Purple, he also directed Goldie Hawn in The Sugarland Express (1974) and his most recent film, The BFG, featured 12-year-old Ruby Barnhill in the lead. His next film, The Papers, also stars Meryl Streep in the main role as the first US female newspaper publisher.

Banks is next set to direct a rebooted film version of Charlie's Angels. As well as appearing in the Pitch Perfect series of films, she directed the second and served as a producer on all three.

So You Missed The Rhode Restock. Here Are The Best Rhode Skin Dupes

What’s Going on With Selena Gomez?

Love Is Lost In Hollywood