Follow Up Friday—How This Week's Stories Have Moved On... 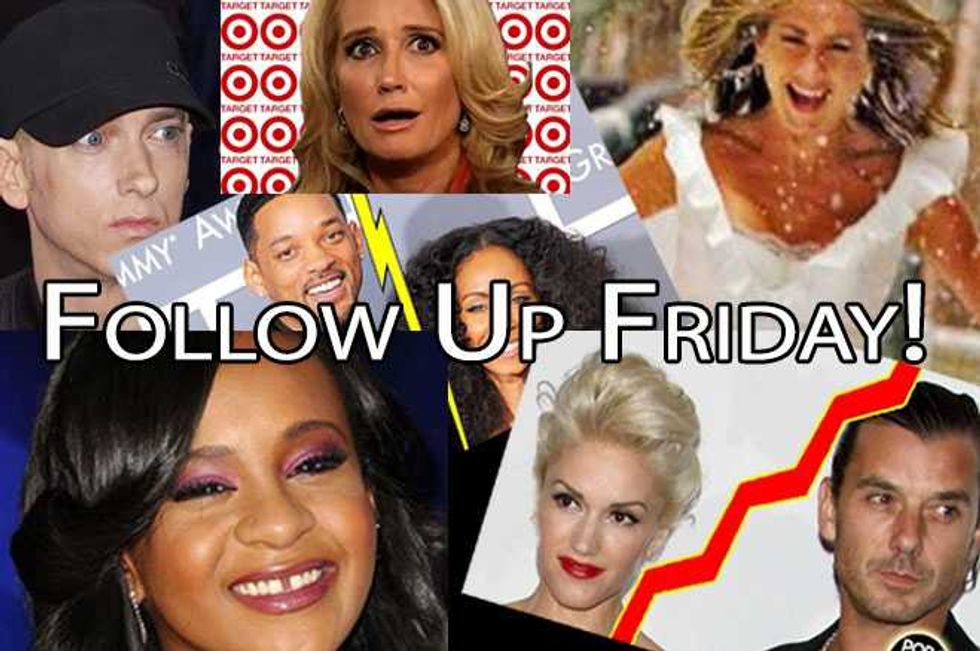 In this week's Follow Up Friday, Popdust brings you a follow up to some of the stories we featured this week.

We've seen a marriage, a separation, a divorce denial, and a funeral in what has been an action packed week in the mad mad world of celebrity....

Things have gone from disrespectful to disgusting to downright despicable. After the hullabaloo at the funeral Bobbi Kristina's aunt Leolah Brown took to Facebook to counter the story that we was thrown out of the funeral by family friend Tyler Perry.

"As it was and as it will always be; Tyler Perry is loved and respected by me and he is also considered a friend of mine from this day on...As far as me being ‘put’ out of the funeral with the help of Tyler Perry -- that is not true. I will tell the true story and how it ‘really’ went down….“Lastly, Please be aware that this is not over with Mrs. Pat Watson Garland [Houston] and I. There is so much more to come. The world will hear the truth by me. Make no mistake about that,”

She's not going to let it lie—maybe she could turn her attention toward finding out the shameful individual who took and sold the pictures of poor Bobbi Kristina laying in her coffin for a reported $100,000.

Will Smith And Jada Pinkett Smith Are Divorcing

As we predicted, this one is going to be a war of the sources, with one side saying yay and the other side saying nay to the rumors of an impending divorce for the Smiths. Surprisingly for him, Will Smith took the matter into his own hands and issued a categorical denial on his Facebook page,so I guess we have to believe him.

"Under normal circumstances, I don’t usually respond to foolishness. (Because it’s contagious) But, so many people have extended me their “deepest condolences” that I figured – “What the hell… I can be foolish, too!”

So, in the interest of redundant, repetitious, over & over-again-ness… Jada and I are…

I promise you all – if I ever decide to divorce my Queen – I SWEAR I’ll tell you myself!

‪#‎Dumb‬ People Should Have to Wear Scarlet D’s”

Ever controversial, Eminem may have had the wake up call he needed to replace his drug addiction with exercise, but he still hasn't had a wake up call regarding offensive lyrics about women. He's been widely criticized for advocating rape on Dr Dre's new album Straight Outta Compton. On the track Medicine Man, Eminem has a guest spot and he's is heard rapping the line;

Following on from the announcement of their split, and old flame of Gavin Rossdale's has crawled out of the woodwork for another 5 minutes of fame on the back of Gwen Stefani.

Marilyn Robinson, a (brief) 80's (male) popstar from London has been determined for the world to acknowledge that he had an affair with Rossdale when they both hung out, years before Rossdale became Mr Stefani, on the London club scene. Rossdale initially denied it but in 2010 came out and admitted he had had a period of sexual experimentation with Marilyn.

Marilyn felt the need to take to the media this week to clarify that he is not to blame for their split, maintaining that 'people want to blame me'. Newsflash Marilyn: people don't give a shit.

Following on from Kim's arrest for shoplifting from Target, it was revealed that she was actually living in her car at the time of the incident (begs the question where on earth would she have put $600 worth of toys?)

Her relatives are said to be so desperate for her to get some help that sticks, they are hoping a judge will order a 5150 hold—which is a mandatory stay in rehab and is involuntary, meaning that Kim could be kept in the facility for a longer period which would hopefully mean she has time to form an effective plan for sobriety.

Following yesterday's news that Jennifer Aniston and Justin Theroux pulled off the secret wedding of the year—the newlyweds have been photographed boarding a private jet to their honeymoon destination, Bora Bora.

They aren't alone on the romantic Polynesian island though, they were joined by a posse of celebrity Friends (pun intended) including Jason Bateman, Chelsey Handler and maid of honor Courteney Cox, who was reportedly last-man-standing come 3am at the reception!