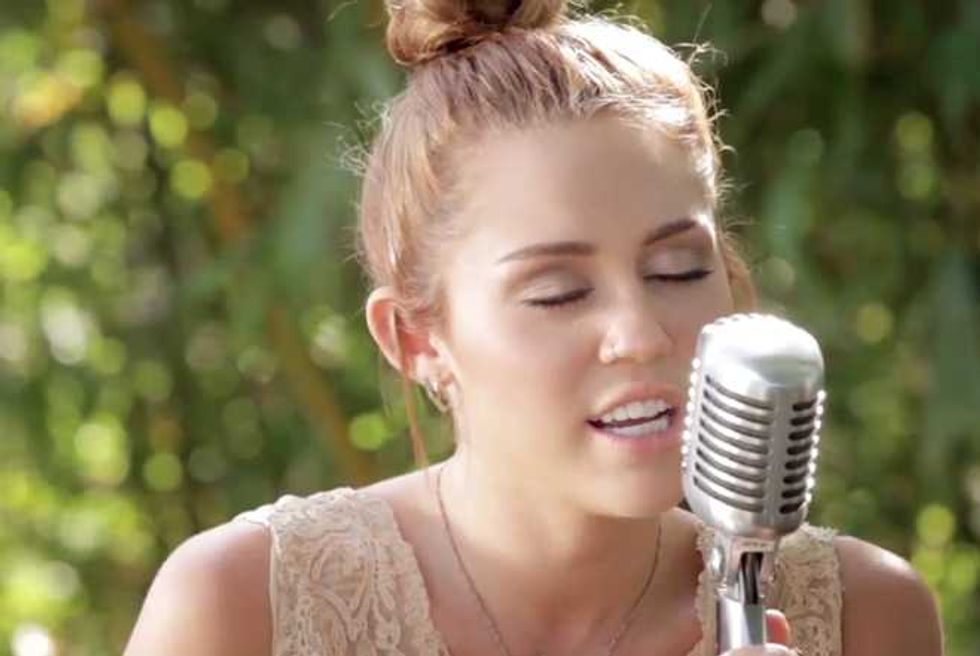 Shot earlier this summer (before she chopped off all her locks and went Robyn chic), Miley Cyrus took on James Shelton’s 1950 classic “Lilac Wine” as part of a project called “The Backyard Sessions” -- where she “brought her band together to perform some of her favorite songs.”

Made famous by tragic singer-songwriter Jeff Buckley on his first and only album, Grace, “Lilac Wine” is perhaps best-known in his signature warbly falsetto. Miley interprets the spooky song in her most natural deep vocals, and a generous echo effect (perhaps meant to give the cover a vintage feel) does its job to provide a warm sound. Along with her stripped down band, this stripped down cover feels like the perfect way for Miley to show off rich vocals often lost in the production of her hit pop records.

What other songs might Miley perform in these upcoming Backyard Sessions? We already know that the pop star has a not-so-secret edgy side, covering Nirvana’s “Smells Like Teen Spirit” and “On Melancholy Hill” by Gorillaz on her most recent tour. We’ve also seen her do her best Stevie Nicks impression, taking on the singer’s famous alto in “Landslide” and she has also contributed to a Bob Dylan tribute album with a cover of “You're Gonna Make Me Lonesome When You Go.”