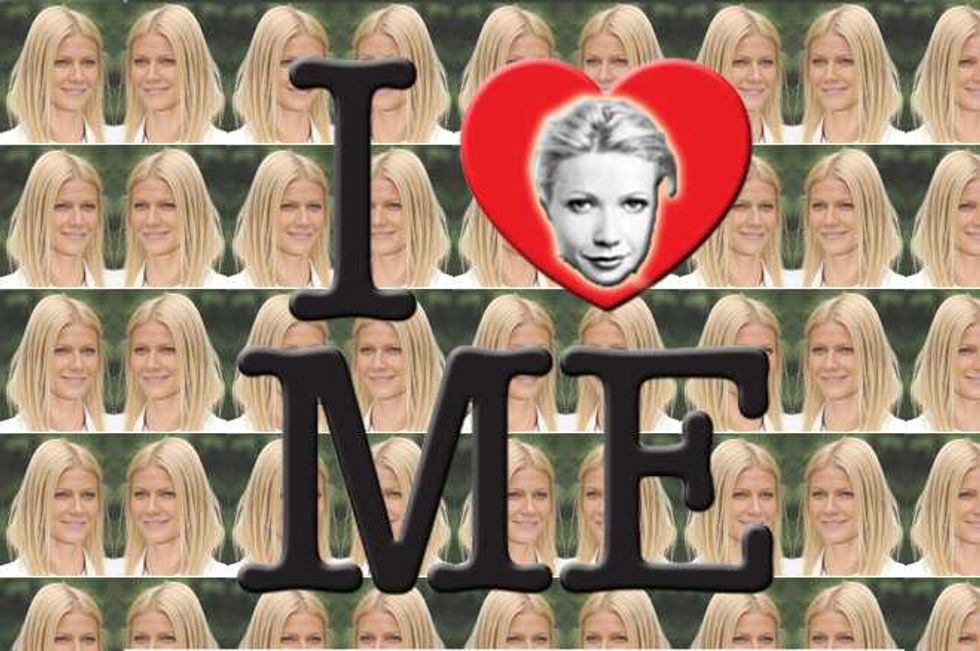 Last month, GOOP ran a piece about the legacy of narcissistic parents by Dr. Robin Berman, a practicing psychiatrist, Associate Professor of Psychiatry at UCLA, and author of Permission to Parent.

This piece should actually be called hypocrisy, since Gwyneth Paltrow seems to lack the self-awareness necessary to see the irony in her warning people about being involved with narcissists.

Apparently all her GOOP disciples got all up in arms about it, so GOOP felt compelled to dole out the following advice;

“Narcissists are often arrogant, self-important, and devoid of empathy. They are so in their own world they can’t even see you. It’s hard to stand in someone else’s shoes when you can’t see past your own. Narcissists see you not as you, but more as an extension of themselves.”

Then she followed up with this handy diagnostic survey.

We at Popdust thought we'd see how she fares.

Narcissism exists on a spectrum from a person who has a few traits to someone who meets the full criteria for a personality disorder. Full-fledged narcissism is a pervasive pattern of grandiosity (in fantasy or behavior), need for admiration, and lack of empathy, beginning by early adulthood and present in a variety of contexts, as indicated by five (or more) of the following:

1.  Has a grandiose sense of self-importance (e.g., exaggerates achievements and talents, expects to be recognized as superior without commensurate achievements).

On how being a movie star is harder than a ‘regular’ working mom:“I think to have a regular job and be a mom is not as, of course there are challenges, but it’s not like being on set.”

2 . Is preoccupied with fantasies of unlimited success, power, brilliance, beauty, or ideal love.

3.  Believes that he or she is “special” and unique and can only be understood by, or should associate with, other special or high-status people (or institutions).

“I don’t hold on to fear as much as I used to, because I’ve learned a lot about genuinely not caring what strangers think about me. It’s very liberating. It’s very empowering, and I’ve learned a lot of that from Jay—Shawn Carter—Z, because his approach to life is very internal. It’s a very good lesson to learn.”

Gwyneth has appeared on over 200 magazine covers.

5.  Has a sense of entitlement (i.e., unreasonable expectations of especially favorable treatment or automatic compliance with his or her expectations).

Said: “When you go to Paris and your concierge sends you to some restaurant because they get a kickback, it’s like, ‘No. Where should I really be? Where is the great bar with organic wine? Where do I get a bikini wax in Paris?

6.  Is interpersonally exploitative (i.e., takes advantage of others to achieve his or her own ends).

Was best friends with Winona Ryder until Paltrow reportedly saw a script for Shakespeare In Love at Ryder's house, and then convinced producers to hire her for the role instead of her BFF.

7.  Lacks empathy: is unwilling to recognize or identify with the feelings and needs of others, like for example, people who have gone through war.

“You come across [online comments] about yourself and about your friends, and it’s a very dehumanizing thing,” Paltrow said. “It’s almost like how, in war, you go through this bloody, dehumanizing thing … My hope is, as we get out of it, we’ll reach the next level of conscience.”

8.  Is often envious of others or believes that others are envious of him or her.

An insider told Heat Magazine, "Her friends are on midlife crisis alert. They worry she'll try to outdo Jennifer (Lawrence), and no one in Hollywood is more competitive than her."

As always, Gwyneth knocked it out of the park. She is truly an overachiever in all things.