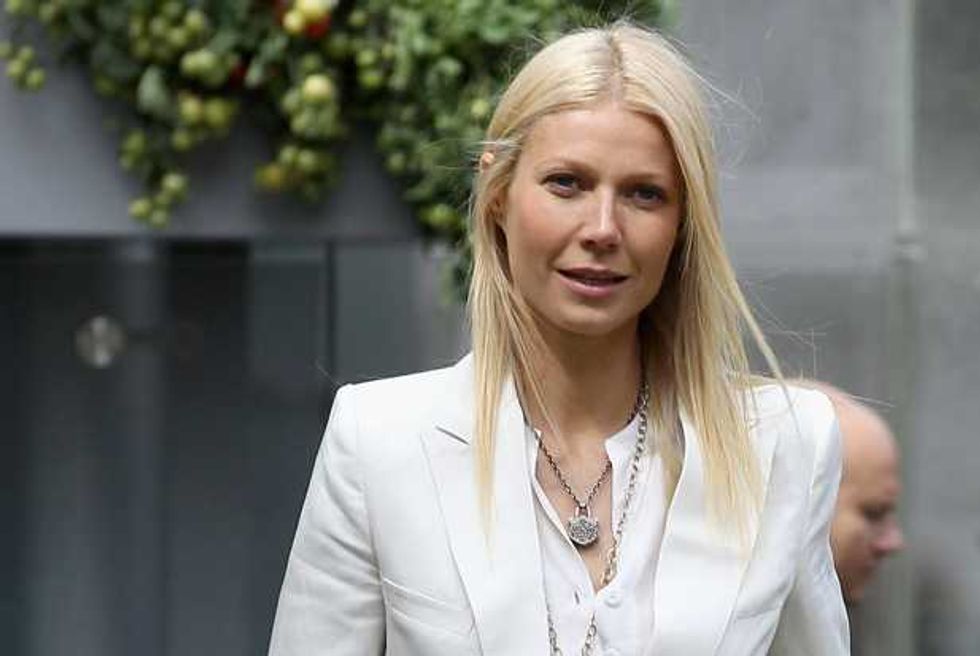 It seems Gwyneth Paltrow's solo album wasn't as inevitable as some people thought. Her album-deal discussions with Atlantic Records have "fizzled out," and there's no certain deal to replace it. Ready the snark! Pop open the schadenfreude! Just don't blame it on Paltrow being an actress.

The walls between movies and music are full of holes, yet everyone seems to forget this anew whenever someone crosses over. There's absolutely nothing that stops someone from having both acting and musical talent. If there were, none of these would exist: Broadway. Glee. Modern music videos. Musicians interpreting songs instead of robotically-phonetically singing the words. Besides, anyone with a laptop or a producer and a set of vocal cords can cut a single, and anyone with musical imagination can write songs. Actors count as "anyone" too.

Yet when they do decide to make music, accusations fly in. They're just doing "vanity projects." (Opposed to what, exactly? Completely selfless projects that exist because actors just wanna make the world dance, forget about the price tag?) They're taking away record deals from artists who really deserve them, because getting and losing record contracts is evidently a simple one-in-one-out deal. They're killing music--which, as far as we can tell, still lives.

It's ridiculously easy to find good albums by actors. We'll defend Milla Jovovich's solo album, 1994's The Divine Comedy, to the death. Donald Glover kills it. Zooey Deschanel's group She & Him has put out a few decent records. Scarlett Johansson's Tom Waits covers album wasn't as bad as anyone said. We could go on, but we'd end up listing close to every album ever made by an actor or actress, because there is much less crap than people think.

This is not a popular opinion. Of course there are some bad albums by stars. Eddie Murphy! Lindsay Lohan! Every reality star ever! Paris Hilton! That last is key--Hilton's is the stand-in, the first name you associate with bad albums by actors. Yet much of Paris isn't all that different from its surroundings. If "Stars are Blind" had surfaced without context, say as an untagged mp3 file, nobody would have much issue with it. And if it were tagged, say, "Britney Spears," it might even win praise. This, of course, did not happen. "The obnoxious Hilton brand proved impossible for most critics to see past," writes Tom Ewing in The Guardian. Praising a Paris Hilton song would mean praising Paris Hilton, and who wanted to do that?

And so's the case for everyone else: a reaction to an album is often a reaction to a personality. When a beloved figure like Glover makes music, the objection mob doesn't really show up. But go down the scale of fandom, and any comments could increasingly be applied just as well to someone's acting skills, or personality, even just existence. Are She & Him too twee for you? Maybe you were just sugar-sick from 500 Days of Summer. Did you think Milla's or Johansson's album was kind of pretentious? Perhaps it's just that she's overstepping her place. Starlets don't have real musical ideas! This bottoms out with reality stars, who face floods of mockery designed to forever sweep their names from view. Musical quality, of course, is an afterthought.

This isn't to say that the quality doesn't vary! We'll never argue, for instance, that The Situation's single is anything close to good. But there are thousands of songs out there that are nearly indistinguishable and just as terrible, made by the exact kinds of struggling musicians and producers that people romanticize. The difference is stakes. Nobody's going to be torn up about the future of, say, an 18-year-old high schooler making bad fist-pumping music on his laptop. But when an actor's involved, the songs themselves aren't nearly as compelling as the chance to dictate from the backseat where his career should be going--or whether it should be going anywhere at all.

Which brings us back to Paltrow. Her biggest mistake might not even have been going into music, but country specifically. Her detached-patrician, GOOP-slinging image totally clashes with the genre's no-nonsense ideal. There's a sense that she's slumming it, playing tourist like Marie Antoinette on her fake farm. And all of a sudden, her singing was everywhere, a publicity push in slow motion before our eyes from an actress thought of as past her prime. Nobody wanted to see that, or her.

So it doesn't matter that Paltrow's got a warm timbre to her voice or that she genuinely seemed to have fun with "Forget You." The album was doomed from the start. We haven't heard it, of course. It might be horrible! But it's more likely to be, if not good, then at least OK. If only it were made by anybody else.