How Much?! Top 5 Most Expensive Celebrity Clothing Memorabilia Auctions 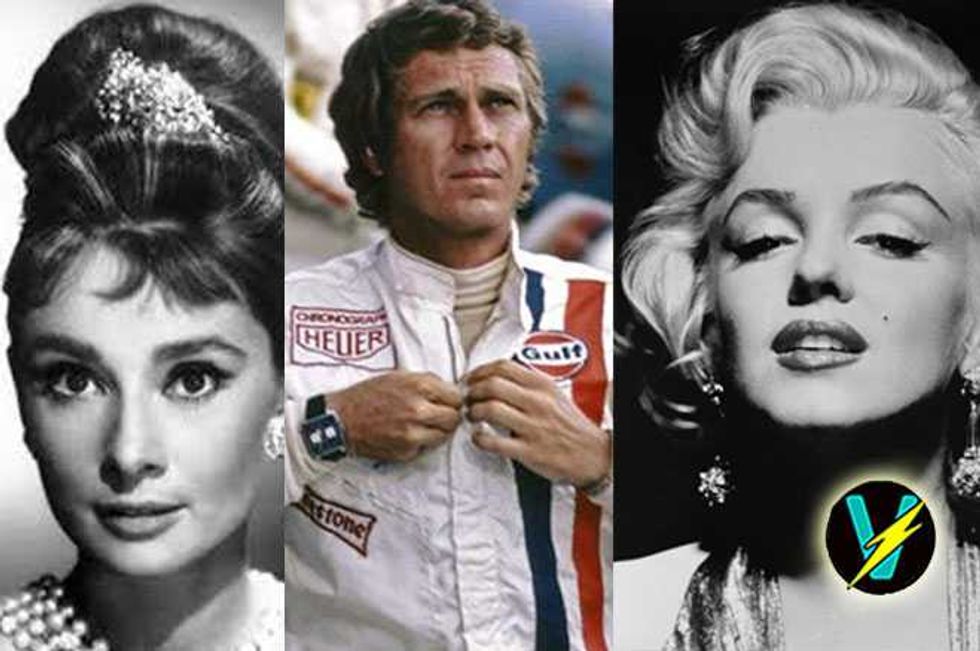 There was a celebrity memorabilia auction in Boston on Friday, and a jacket worn by Ringo Starr in the Beatles movie Help in 1965, was sold for more than $46,500.

The jacket has the name "Ringo" sewn inside and was bought by a top 'rock 'n' roll' collector in Rhode Island who has remained anonymous.

The sale made us think...if you had the cash, how much would you pay for something that has historic meaning, or maybe sets you off on a nostalgic trip down memory lane? And would you want your identity kept secret or would you be happy for the world to know you are the proud owner of a little piece of history?

10 Movies, Bands, TV Shows And Books The World Almost Missed Out On

If you are as fascinated by us at the amount of money people are willing to pay for iconic clothing, look no further—here are Popdust's top five most expensive film clothing memorabilia that has sold over the years...

1. Marilyn Monroe's famous assets were, so legend has it, sewn into this incredible gown leaving no room for any under-garments.  Monroe sang her breathy, sexy, intimate, Happy Birthday Mr President serenade to President John F Kennedy on May 19 1962 wearing the beautiful skin tight, flesh colored, jewel-encrusted sheer dress.  This was right at the time that she was obsessed with JFK, and he was trying to distance himself from her, having ended their affair when she became too clingy.  She was introduced that night somewhat prophetically as "the late Marilyn Monroe" on account of her non appearance on stage—tragically she died just three months later.

The one of a kind dress was owned after her death by Monroe's acting coach, Lee Strasberg who inherited most of her estate, and the fabric for the Jean Louis gown originally cost a staggering $12,000.  It was auctioned by Strasberg's widow in 1999 and was bought by a Manhattan based collectible company called Gotta Have It! They paid an incredible $1,237,500 and declared afterwards that they would have paid twice that!

2.  The iconic jacket worn by The King Of Pop, Michael Jackson made it's first appearance in the Thriller video in 1983.  The red and black calfskin jacket was designed by Deborah Nadoolman Landis (wife of Thriller director John Landis) and became so iconic that not only did it spark a 1980's fashion craze, but Jackson always wore this design when performing Thriller throughout his career.

Michael Jackson’s Neverland Ranch Is Back Up For Sale – And Kanye Wants In!

There were two versions of the jacket made for the video, one is still owned by the Michael Jackson estate, and the other was given by Michael to costume designers Michael Bush and Dennis Tomkins to use as a reference for all the future jackets they would make.  The jacket bears Michael's autograph  and was sold at auction in 2011 for a whopping  $1.8 million with all proceeds of the sale going to The Shambala Preserve which is where Jackson's two Bengal tigers have been living since 2006 when he left Neverland.  Texan gold trader Milton Verret is the new owner and described the jacket as "the greatest piece of rock and roll memorabilia in history".

3. Judy Garland's ruby slippers are the most famous pair of shoes in film history.  There were four pairs used in the making of The Wizard of Oz in 1939 and who can forget Dorothy heel clicking her way back to Kansas.

Secrets And Photos From The Yellow Brick Road As The Wizard Of Oz Turns 75!

Of the four pairs known to exist one is in the Smithsonian Museum in Washington DC, one is owned privately, another was stolen from the Judy Garland Museum in Minnesota and the final pair, said to be the most pristine and the most valuable, were sold in 2012 for an undisclosed figure.  The slippers were acquired by The Academy of Motion Picture Arts and Sciences, with the likes of Leonardo DiCaprio and Steven Spielberg putting up the readies.  The shoes had been previously listed for sale for $2-$3 million (they went unsold at that auction), so we can only guess how much they went for this time!

4. Steve McQueen has to be one of the coolest film stars of the twentieth century, and he was super duper cool in Le Mans, one of the most influential motor racing films ever made, in 1971.  McQueen wore the Hinchman Nomex iconic racing suit during the film,  which in 2012 became the most expensive piece of racing memorabilia ever sold, other than a vehicle.

The original suit was donated to a British newspaper at the end of filming, and they ran a competition about Le Mans which was won by a then 12 year old Timothy Davies, who kept hold of it for the next four decades.  It then came into the possession of one Morry Barmak in 2010, owner of Collector Studio who had been trying to own the suit for over ten years.  Morry then spent a year touting it about amongst motor racing enthusiasts to raise the profile of his agency, and eventually succeeded in selling it for $155,000 (which presumably yielded him a satisfactory profit).

Imagine how he must have felt then when literally just over three months later in December 2011 he saw the very same suit listed in an "Icons Of Hollywood" auction—and it sold for $984,000!!  First rule of selling is 'know your market'�, and that is the mistake that Morry made, he didn't recognize the way more lucrative film memorabilia market would be interested in his motor racing suit!

Julia Roberts Is The New Face Of Givenchy

There were three duplicate dresses made for the film and one of them,  owned by Hubert De Givenchy, founder of the French fashion house was donated in 2006 to raise funds for the City of Joy charity, which supports impoverished children in India. The beautiful gown was sold for $923,187 to an anonymous buyer—there had been speculation that Victoria Beckham was interested in buying it, as she has cited Hepburn as her heroine, and is thought to own one of the star's diamond necklaces.  Of the two remaining dresses, one is kept in the Givenchy archives and the other is in a costume museum in Madrid. 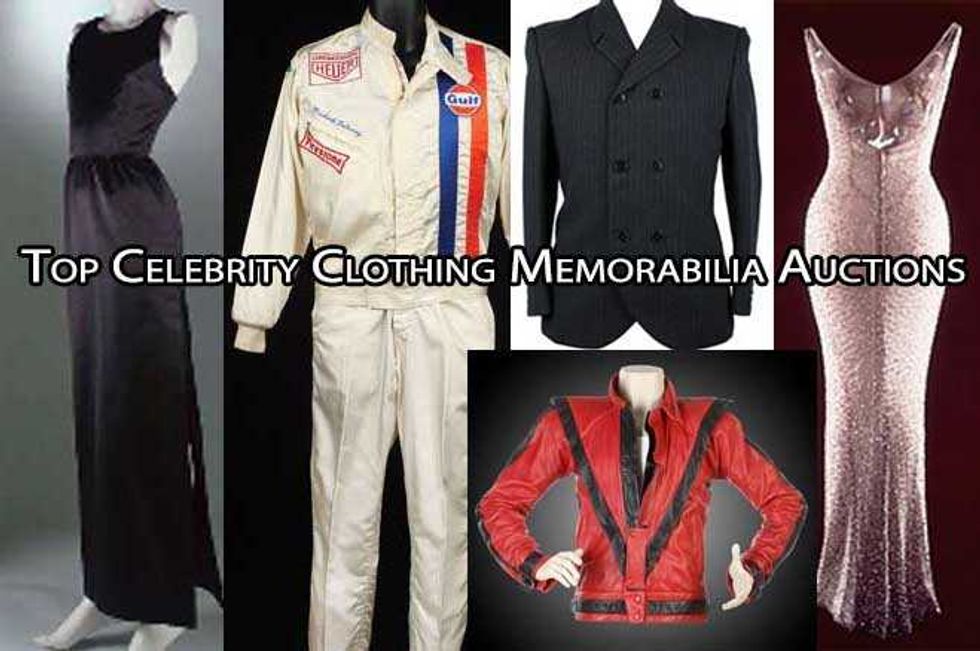 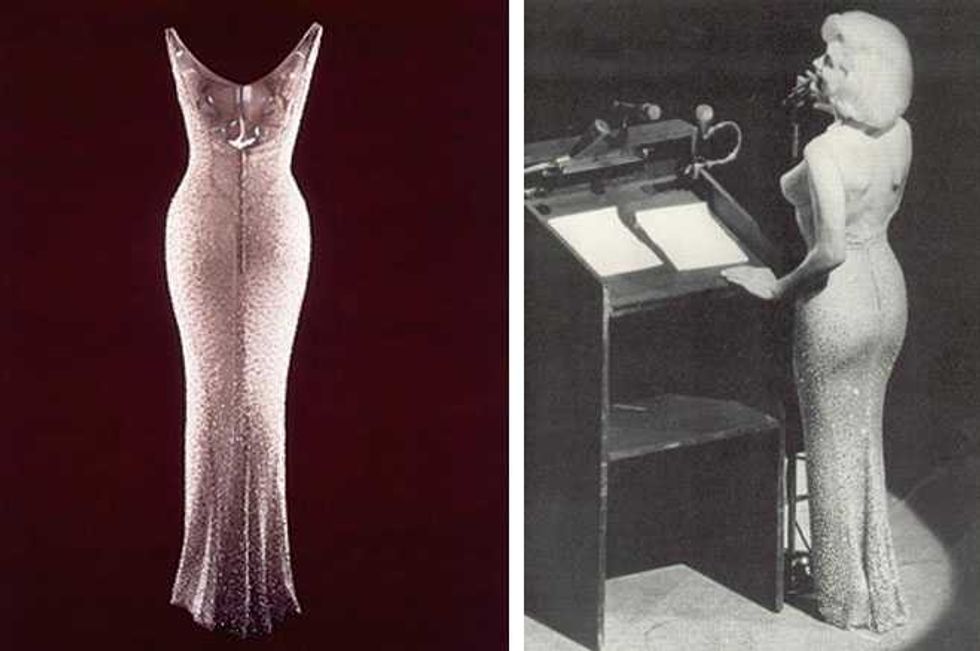 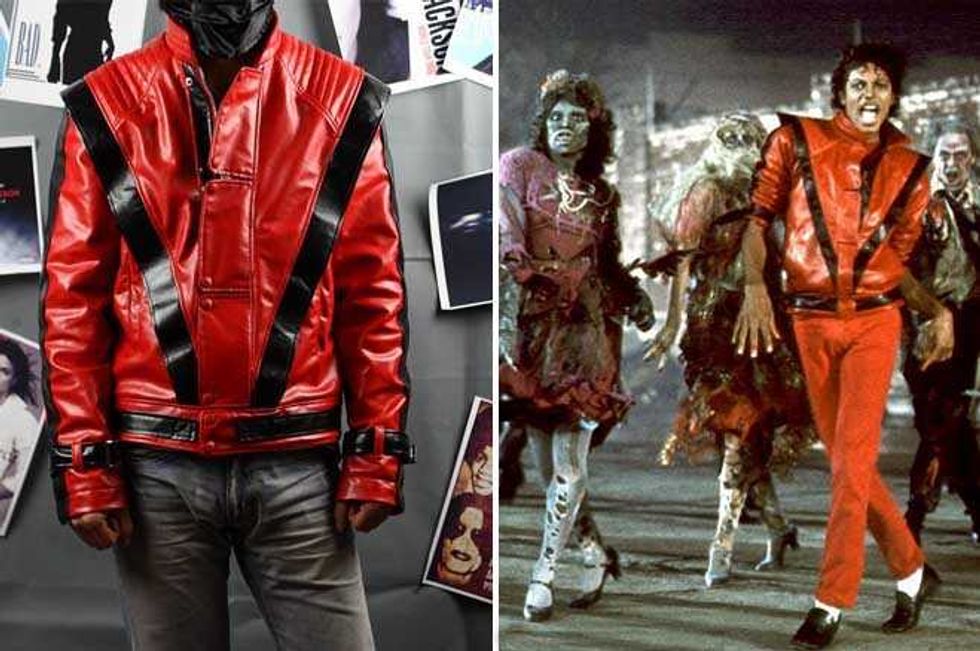 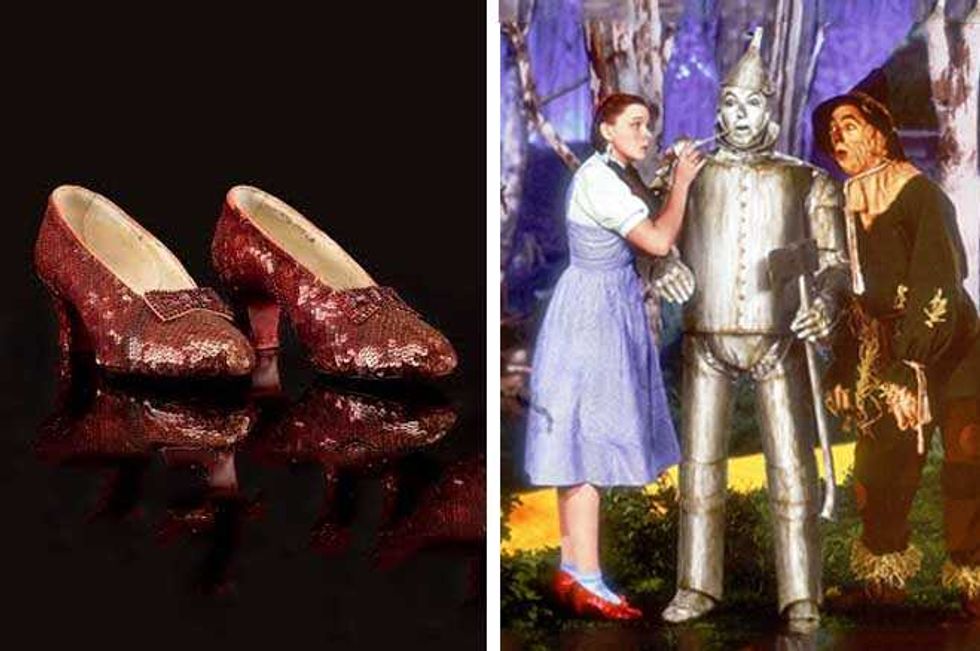 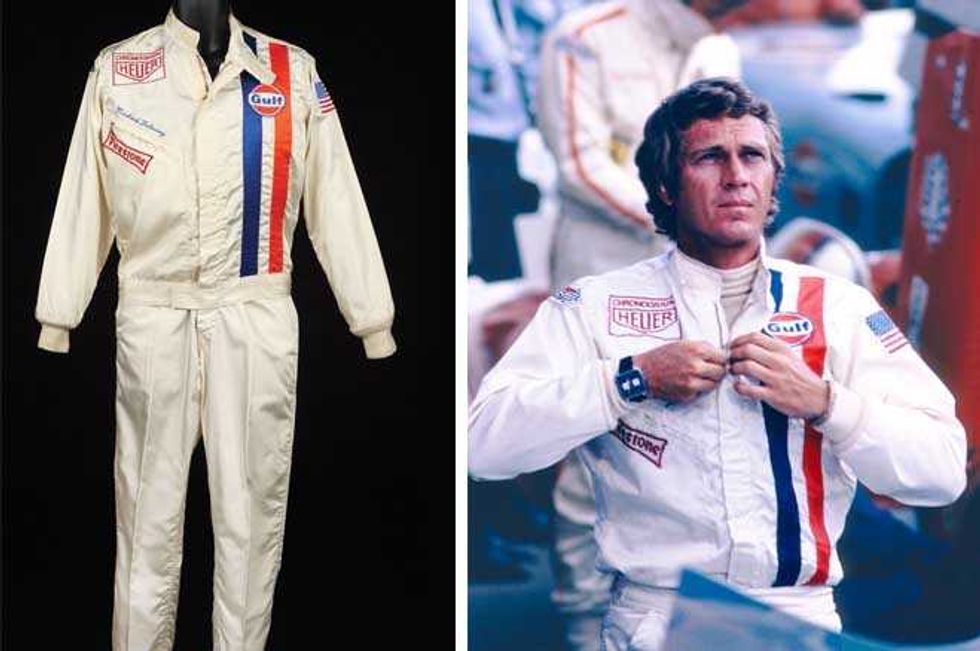 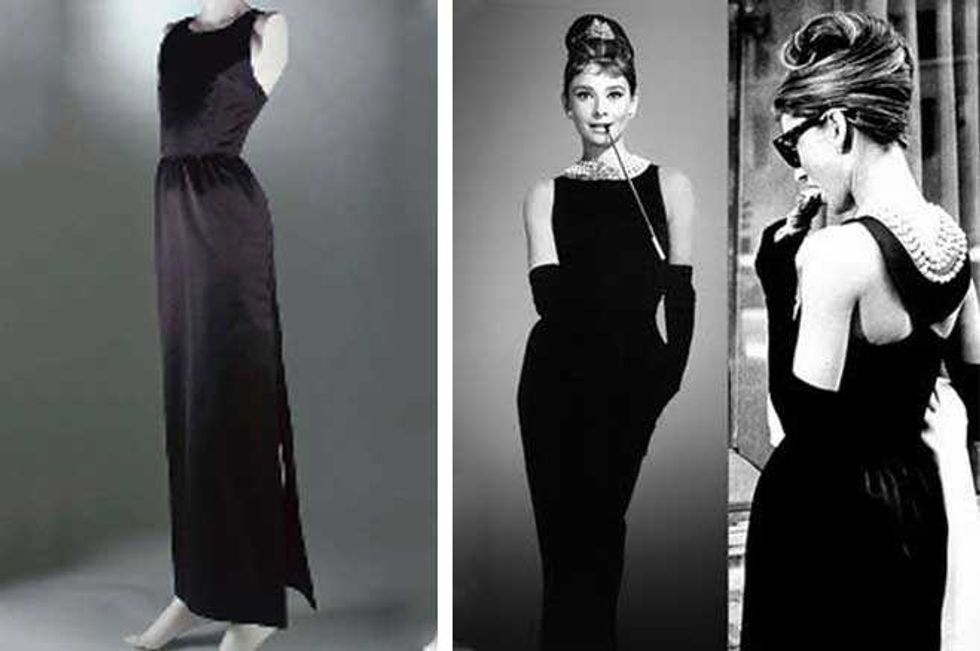 Previous Next
Audrey Hepburn, so chic, so elegant, so beautiful 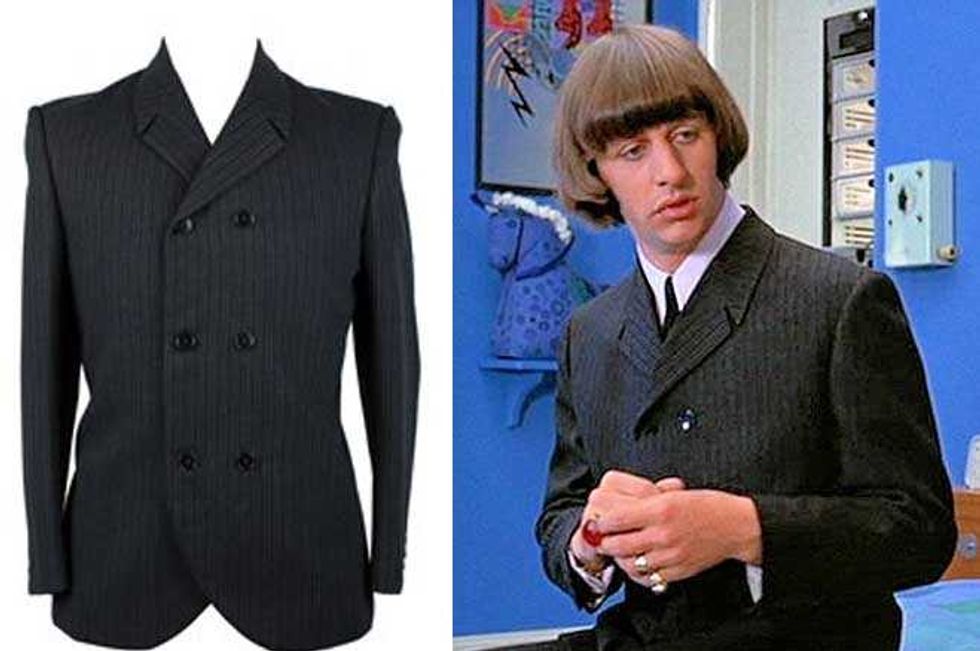