If You Think "Blurred Lines" Was Misogynistic, Wait Till You Hear "Don't Ya" and "Redneck Crazy" 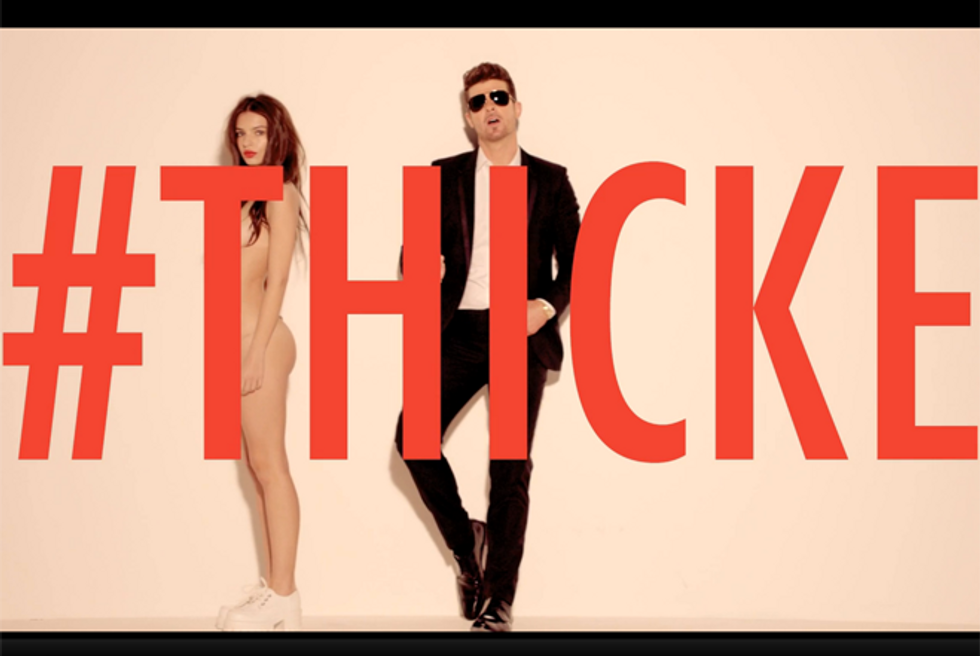 As much acclaim and adoration Robin Thicke, T.I. and Pharrell's "Blurred Lines" has gotten on the way to its becoming the near-unquestioned Song of the Summer, not everyone is terribly pleased with the song's success. "Lines" has received a fair share of controversy for the gender-inequality of its content, with many calling out the objectification of women in the song's infamous model-featuring (and in the unrated version, nudity-heavy) music video, and a couple going so far as to call the song's lyrics "kind of rapey" for repeated lines like "I know you want it" and "The way you grab me, must wanna get nasty." They're arguable points, and ones that whether or not we agree with, can't help but to have tempered our enthusiasm slightly for what is otherwise unquestionably one of the best pop songs of 2013.

However, we're here at Popdust to tell you: It gets worse. Not on Robin Thicke's album, necessarily--Blurred Lines the LP won't be out for another month still, and we have no advance knowledge of its gender politics--but in a couple new country songs, which take the problematic content of Thicke's summer anthem and blow them up to disturbing proportions. A couple listens to these songs, both of which are currently climbing the country and pop charts, and your next listens to "Blurred Lines" should have you feeling like you're listening to Helen Reddy's "I Am Woman" by comparison.

First, there's Brett Eldredge's "Don't Ya." The song's jaunty feel and flirty tone would have you thinking it was a harmless sort of come-on, and if taken at face value, you could certainly say that it was—just Eldredge bantering with a woman playing hard-to-get at the bar, the two doing a sort of courtship tango. But reading some of the lyrics out of context, with the smilin' tone removed, and it reads a lot like...well, at best a lot like early Nickelback, and at worst a good bit stalkery:

You dance, oh you move

But girl you know I'm watchin'

Don't lie, you've got it all figured out

That smile has got me spinnin' around

Don't even try actin' like it ain't no thing

Wanna get outta here and let me show ya

How good it would feel to hold ya

And so on. Basically, the whole song is Eldredge accusing this girl of being extra-flirty with the express intention of turning him on from afar, to his alternating consternation and delight. Eldredge sees it as part of "the little games you play," but if taken from the girl's point of view, it could very easily just be a creepy guy at the bar taking things wayyyyy too personally, reading too much into totally innocuous glances and incidental physical contact and thinking there's a relationship there that's actually 100% non-existent. Lines like "Girl you cut those jeans just right / I know you didn't buy 'em like that" have that leering eye for detail that make the song sound unsettlingly prowler-ish, and once you get to that climactic "wanna get outta here" lyric...it's hard to imagine the answer is yes.

Still, the song is totally harmless in comparison with Tyler Farr's "Redneck Crazy," which rather than merely having a stalker-y tone or possible stalker implications, is actually a song about literally stalking a girlfriend back to her lover's house, and threatening violence against one or both of them once there. Some choice lines:

Crank up a little Hank, sit on the hood and drink

I'm about to get my pissed off on

I'm gonna aim my headlights into your bedroom windows

Throw empty beer cans at both of your shadows

I didn't come here to start a fight, but I'm up for anything tonight

Did you think I'd wish you both the best, endless love and happiness

You know that's just not the kind of man I am

I'm the kind that shows up at your house at 3am

Now, to the credit of "Redneck Crazy," this clearly isn't a song like "Don't Ya" that aims at being fun and flirty—this is a violent, drunken breakup song in which Farr makes little attempt to seem likeable. Still, there's a "Hey, you made me do this" quality to the song that makes it disturbing, and the inclinations towards violence—possibly towards the woman, and definitely the guy--is hardly politically correct as a justifiable course of action in response to a broken heart. (Hell, even Carrie Underwood at least kept the physical destruction to automobiles only.) What's more, the idea of "going Redneck Crazy" taking off as a catchphrase seems doubly problematic, as if it's somehow cool or authentic or excusable to display this kind of behavior just because you happen to be a blue-collar guy from the deep south. When a line about truck size being equal to penis size ("He can't amount to much by the look of that little truck") is the least offensive thing in your song, it might be time to scale it back a little.

This is not all to say that "Blurred Lines" is harmless in its treatment of women by comparison—just to say that there's still way worse out there, and we shouldn't be given Thicke and company all of our outrage when songs like this are becoming nearly as successful within their own genre, and threatening to cross over in a similar way. ("Don't Ya" is currently #32 on iTunes, "Redneck Crazy" is #38.) At the very least, when the fury over those two songs really kicks in, don't say you weren't warned.