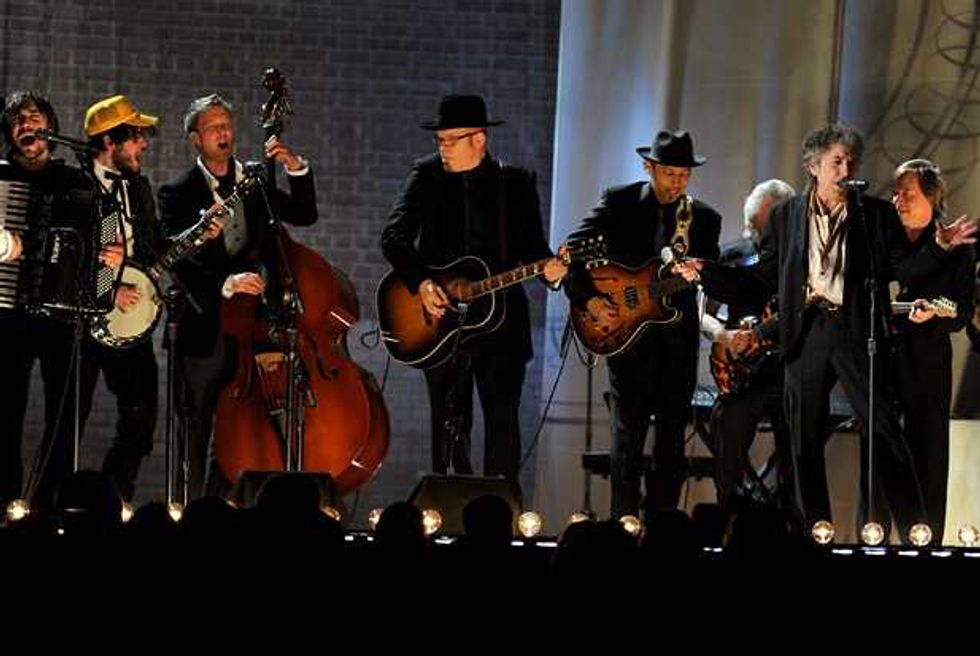 With a visual theme of “How many people can we fit in a space the size of a Manhattan studio apartment?” and a musical theme aiming for string-band immediacy, the Grammys’ “Acoustic Tribute” was a tight, amiable mini-set. Also, befitting its headline star Bob Dylan, it frequently went electric.

After one of his patented Top 10 lists, David Letterman introduced the lineup: Mumford and Sons, the Avett Brothers and Dylan.

The Mumfords’ strummy, fervent rendition of their own “The Cave” was like a ship-in-a-bottle version of Arcade Fire. They hewed closer to the theme than the Avett Brothers, whose “Head Full of Doubt, Road Full of Promise” found Seth Scott Avett behind a Roland keyboard. Still, the performance, while a bit more cluttered sonically, was impassioned and rich.

The two bands formed a virtual chorus line behind Bob Dylan, who went even further off the “acoustic” script with a “Maggie’s Farm” performance that looked like nothing so much as vintage Vegas. Emerging to an Elvis-like MC announcement, complete with white shoes, puckish smile and hammy hand gestures, Dylan looked like he was having a blast. Even in a voice gruffer than his 21st century usual, “Maggie’s” sounded fierce and punchy. Dylan held an old-style mic throughout the performance like a talisman, using it only for a brief harmonica blow at the end.

In short, as usual, whatever everyone else is doing, Dylan’s doing something different. In the audience, Neil Young did an all-hail hand gesture.