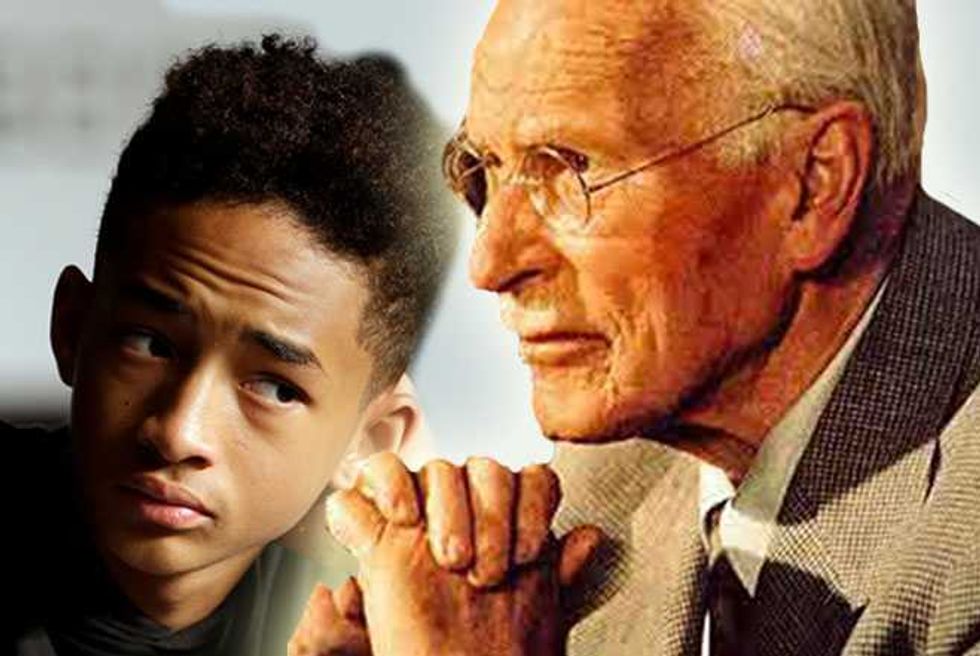 He's actor/rapper Jaden Smith—the offspring of Will Smith and Jada Pinkett—and, have no doubt, the muther fucking fucker is deep…. real, real deep…

After intrepidly rifling through, and painstakingly discarding the layers of obvious, spoiled, bratty, entitlement, Popdust's (kind-of-maybe-not-really-let's-face-it) psychiatric expert, Dr. Mick Coppin, has determined that Jaden is suffering from a possible myriad of diagnoses. 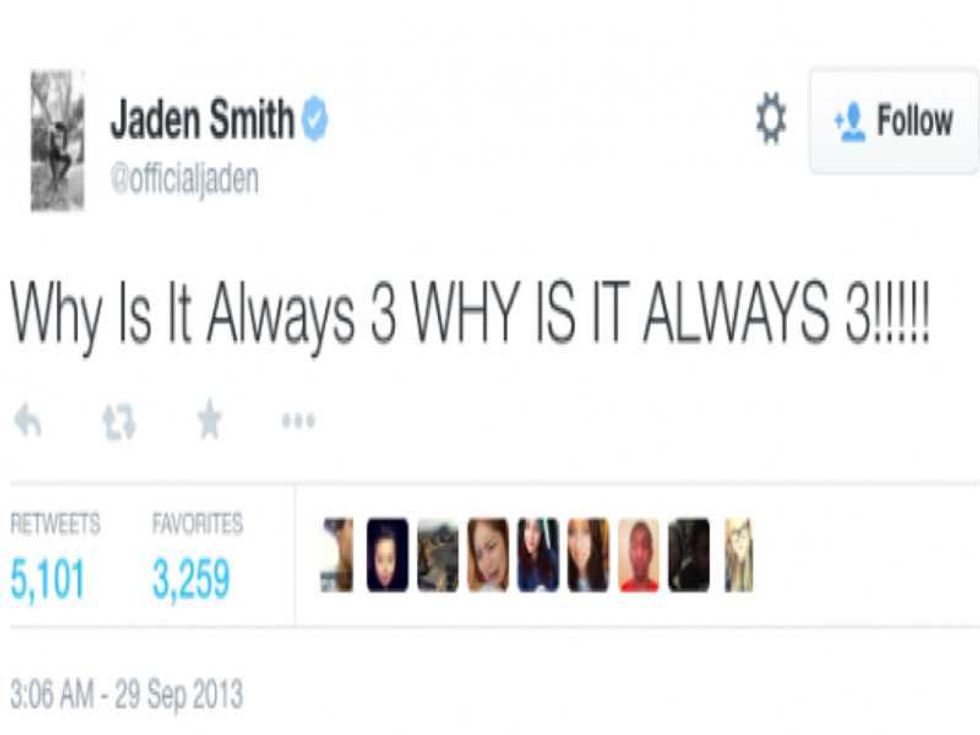 Previous Next
Here, young Jaden unwittingly admits to suffering from compulsive counting—often a common symptom of obsessive-compulsive disorder. People with counting compulsions may feel the need to count because they feel certain numbers have a special significance, and therefore specific actions must be performed a certain number of times. For example, Jaden may feel like he needs to drive his Bentley around the circle drive 3 times. And since 3 is half of 6, and 6 is the devil’s number, in my (totally ludicrous opinion) Jaden is obviously the spawn of Satan. 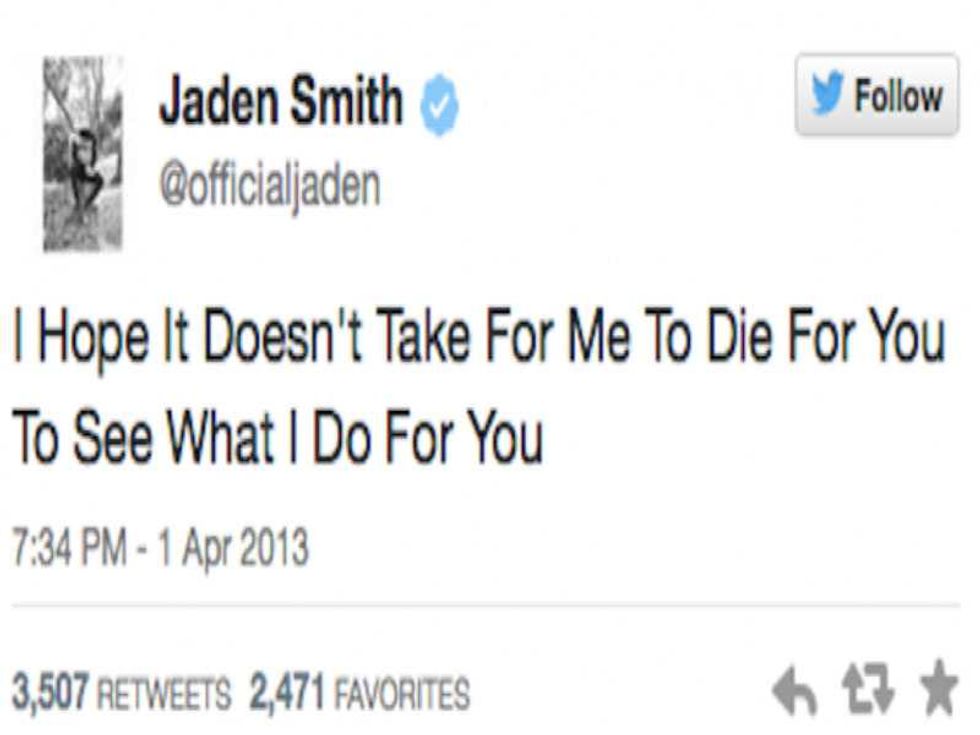 Previous Next
In my (totally ludicrous opinion) this tweet provides compelling evidence that Jaden has a Narcissistic personality disorder—which often leads to an inflated sense of own importance, craving admiration and a lack empathy for others. However, behind the seemingly cocky facade lies a broken spirit that cries like a bitch any time he runs low on Axe Body Spray. Or whatever rich douchebag kids use. 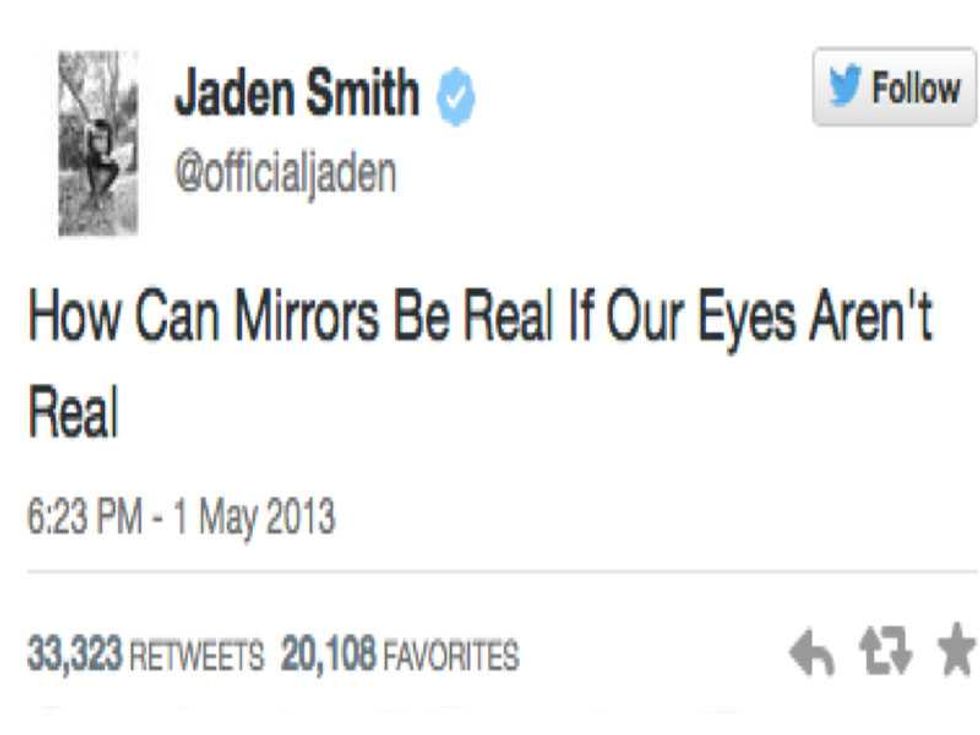 Previous Next
The narcissist is often vain and loves mirrors. In my (totally ludicrous opinion) this tweet is clearly an extension of Jaden’s possible narcissism, and a sign that he has a creative imagination on par only with those who take hallucinogenic mushrooms. 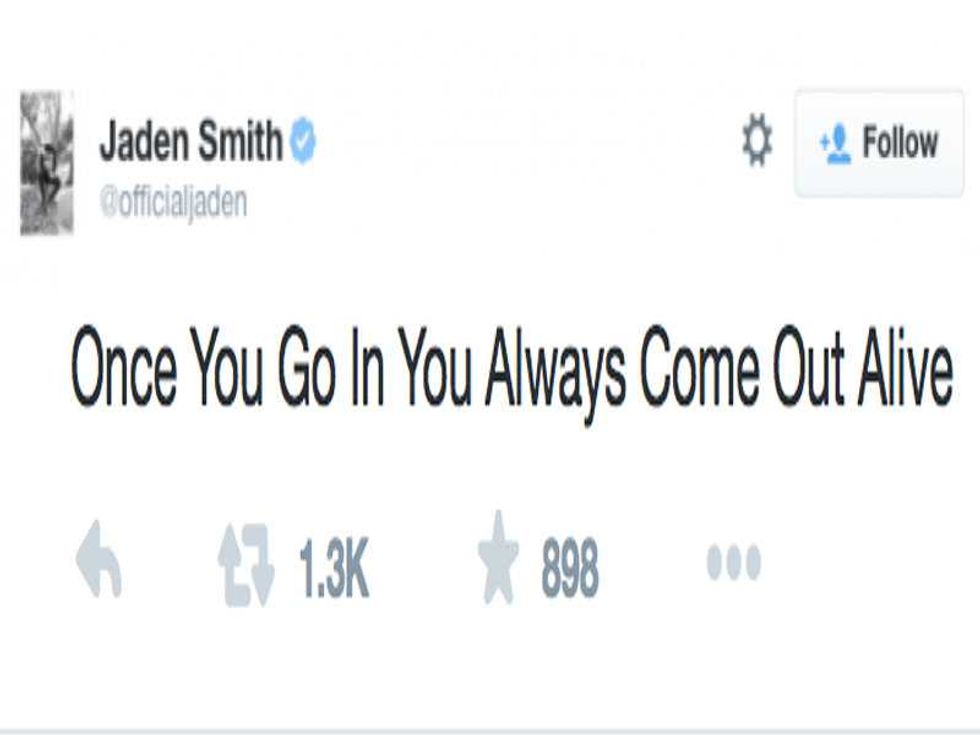 Previous Next
Here, young Jaden champions introspection, saying that by looking inward one awakens to consciousness and collapses into a mirror through which he sees his own soul. Tweeting pretentious bull shit. 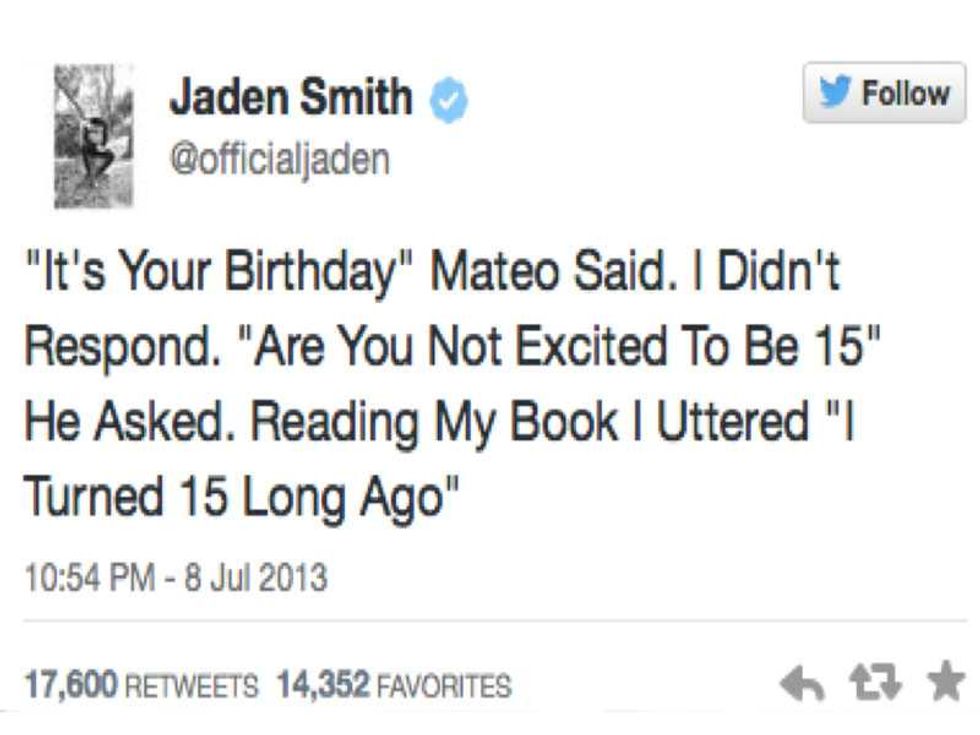 Previous Next
The precocious child echoes Jorge Luis Borges sentiments when he says that time, if we can intuitively grasp such an identity, is a delusion—the difference and inseparability of one moment belonging to its apparent past from another belonging to its apparent present is sufficient to disintegrate it… i.e. One day Jaden didn’t have pubes, the next day he did. On a potentially grimmer note, in my (totally ludicrous opinion) time perception is affected in some psychiatric disorders such as schizophrenia, attention deficit/hyperactivity syndrome, depression, anxiety disorders. 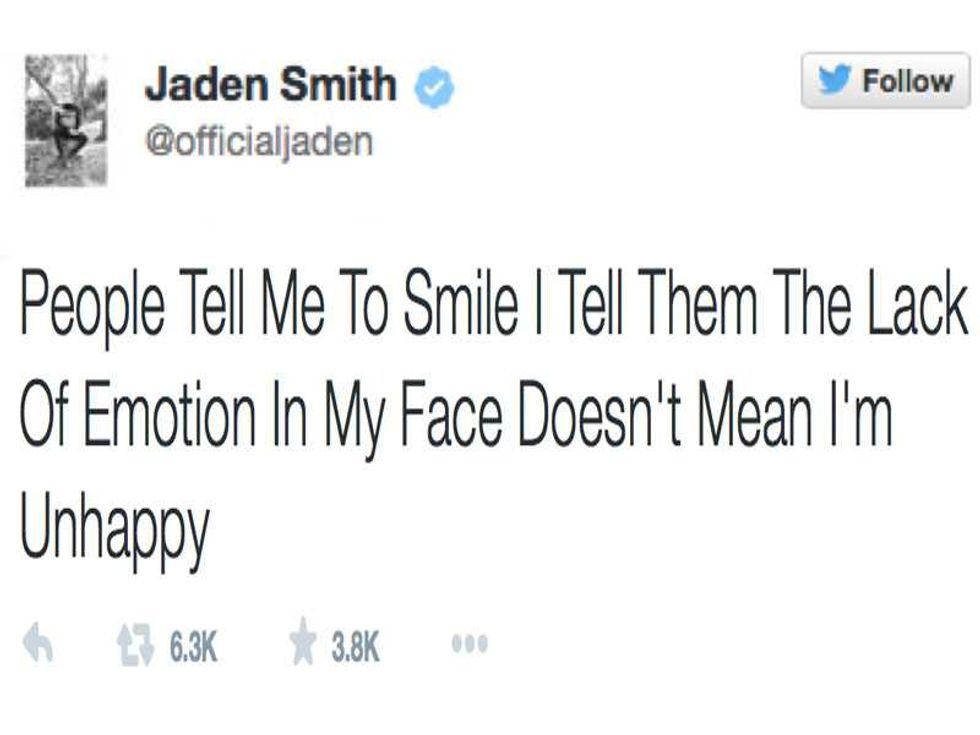 Previous Next
Jaden is tickled to near hysteria, and given that he is likely a narcissist in my (totally ludicrous opinion), it is not surprising that his own authorship triggered the euphoria. 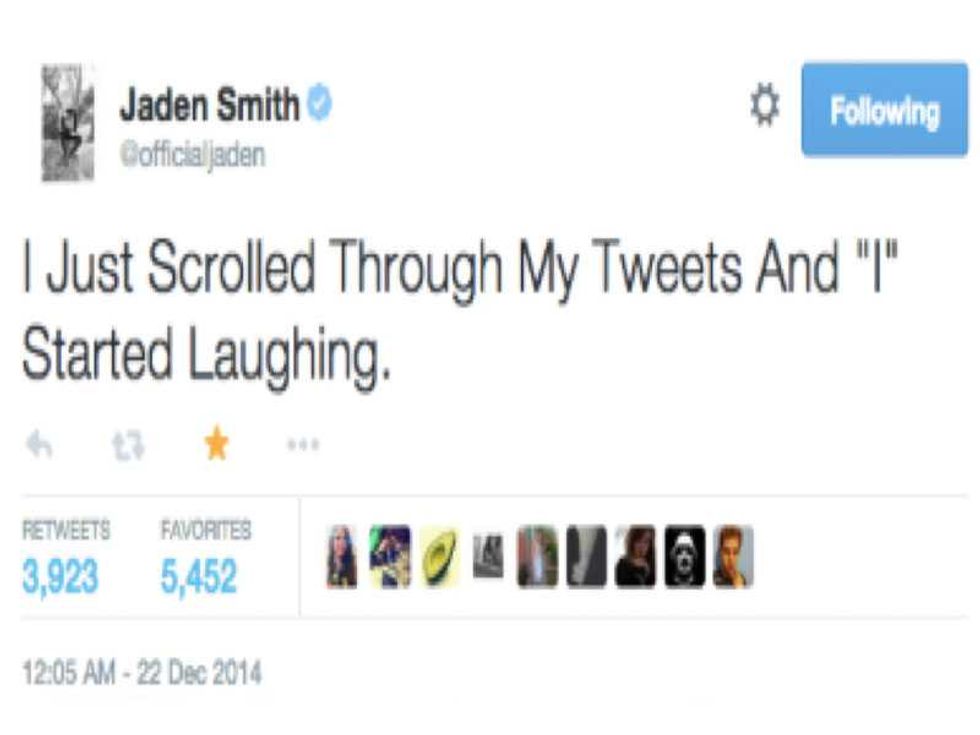 Previous Next
In this Tweet, Jaden cannot even bring himself to smile. In my (totally ludicrous opinion), his stark polarity could possibly (but probably not) hint at manic depression. 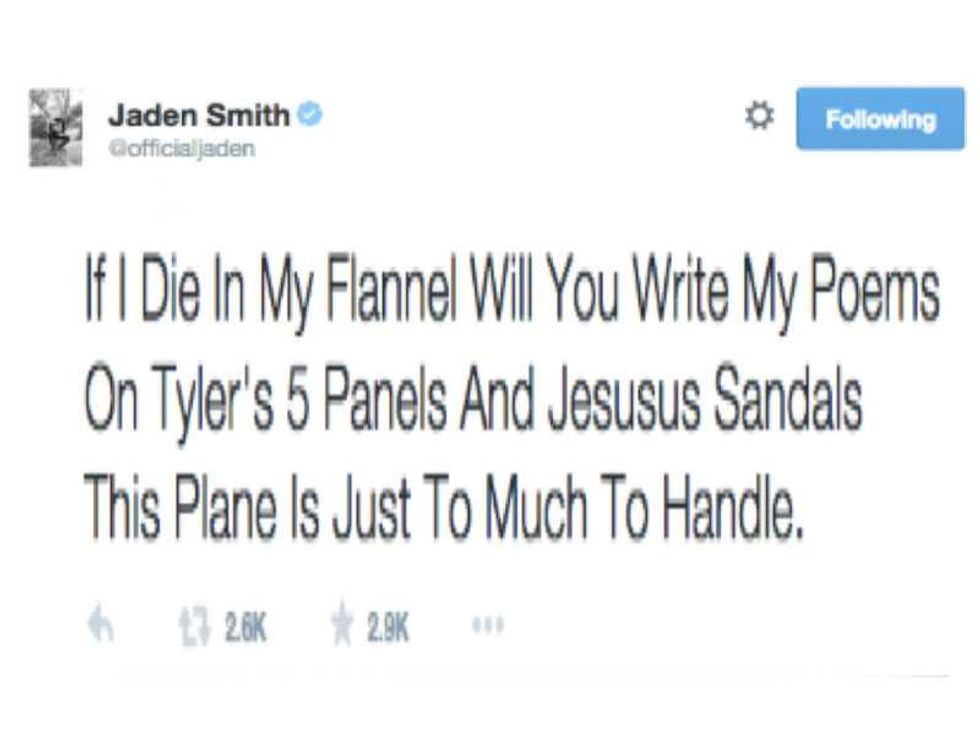 Previous Next
If rhyme was a drug Jaden would sell it by the gram, probably, although actually not, in reality, In my (totally ludicrous opinion). 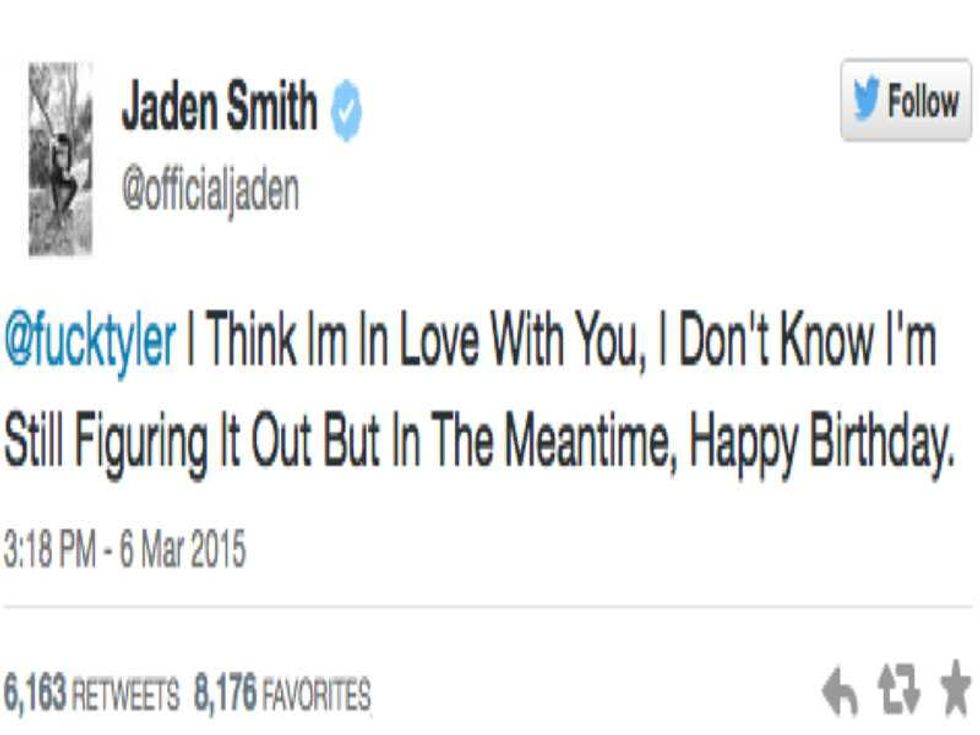 Previous Next
On March 6, Jaden tweeted a message that he was falling in love with rapper Tyler the Creator and gay rumors erupted around the celebuspawn, who later insisted that he is not, in fact, gay. No further psychoanalysis required here. 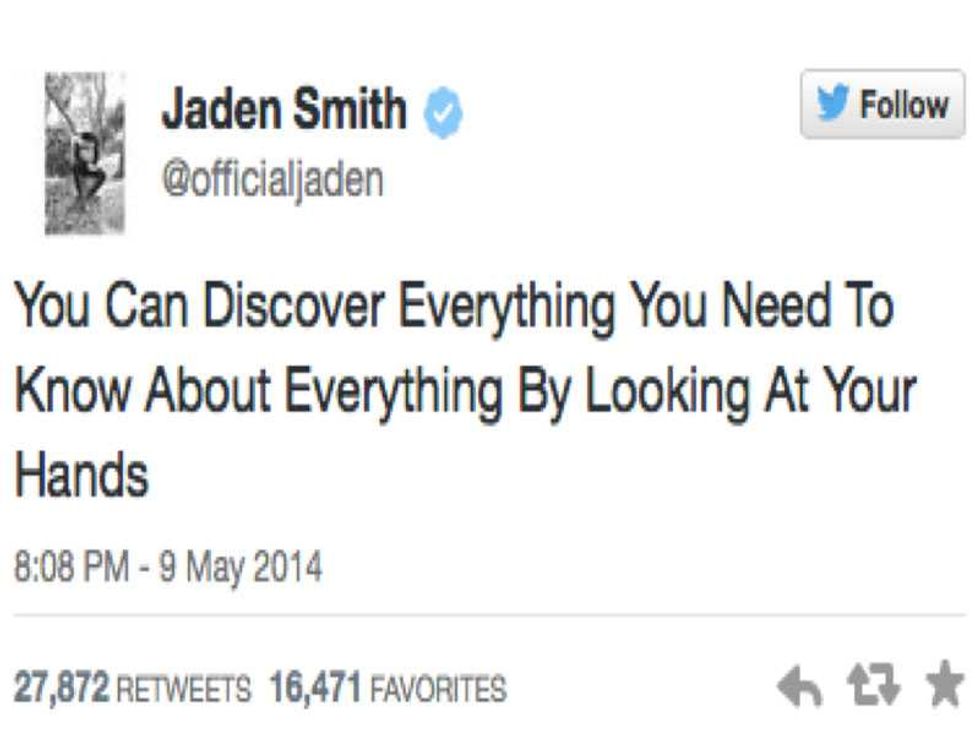 FYI: Jaden Smith is NOT Dead