J.K. Rowling On Ron & Hermione's Relationship—Truth About That 'Wonderland' Interview 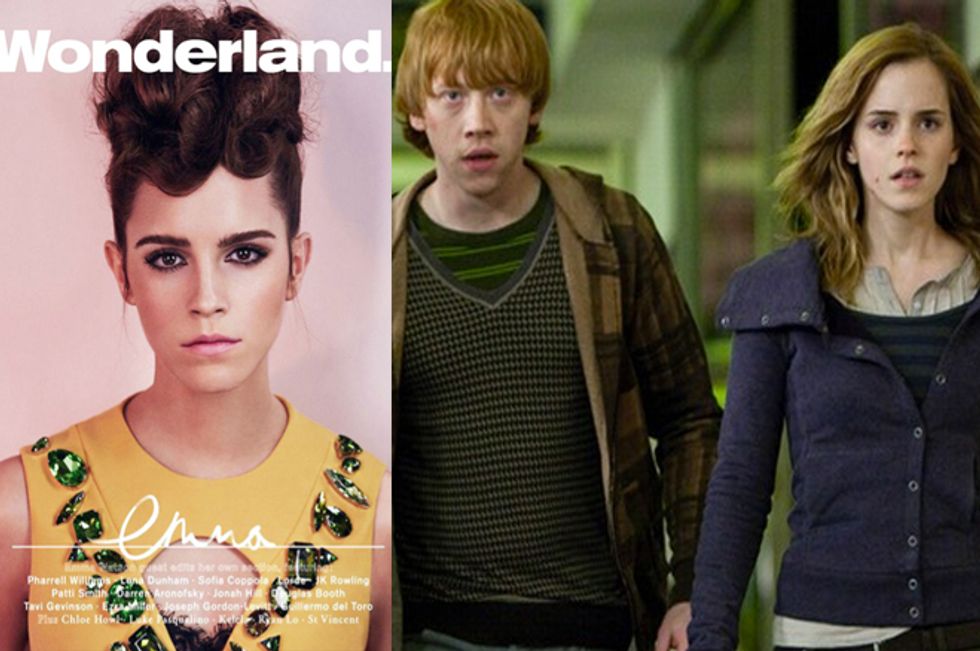 Remember that interview preview The Sunday Times ran with earlier this week? The one in which Harry Potter creator J.K. Rowling allegedly admitted that Ron Weasley and Hermione Granger should never have been paired together?

Well, it appears to have been taken quite out of context.

We may have been victims of the sensationalism, too, and when you take a closer look at the full interview, things are put into perspective.

On her new outlook of Hermione, Rowling says, "I know that Hermione is incredibly recognizable to a lot of readers and yet you don't see a lot of Hermiones in film or on TV except to be laughed at. I mean that the intense, clever, in some ways not terribly self-aware, girl is rarely the heroine and I really wanted her to be the heroine. She is part of me, although she is not wholly me. I think that is how I might have appeared to people when I was younger, but that is not really how I was inside."

She does confess that Hermione and Ron's relationship was born from "wish fulfillment." She explains, "That's how it was conceived, really. For reasons that have very little to do with literature and far more to do with me clinging to the plot as I first imagined it, Hermione with Ron."

"I know, I'm sorry, I can hear the rage and fury it might cause some fans, but if I'm absolutely honest, distance has given me perspective on that. It was a choice I made for very personal reasons, not for reasons of credibility. Am I breaking people's hearts by saying this? I hope not," she adds.

At this point, actress Emma Watson, playing as interviewer, weighs in, "I don't know. I think there are fans out there who know that too and who wonder whether Ron would have really been able to make her happy."

Rowling continues (this is one part of the interview that was omitted previously), "It was a young relationship. I think the attraction itself is plausible but the combative side of it... I'm not sure you could have got over that in an adult relationship, there was too much fundamental incompatibility. I can't believe we are saying all of this – this is Potter heresy!"

She then goes on to talk about the dynamic between Harry and Hermione that was explored in that tent scene found in the film. "In some ways Hermione and Harry are a better fit and I'll tell you something very strange," Rowling teases. "When I wrote Hallows, I felt this quite strongly when I had Hermione and Harry together in the tent! I hadn't told [Steve] Kloves that and when he wrote the script he felt exactly the same thing at exactly the same point."

Watson replies, "That is just so interesting because when I was doing the scene I said to David [Heyman]: 'This isn't in the book, she didn't write this.' I'm not sure I am comfortable insinuating something however subtle it is!"

Rowling further details, "And actually I liked that scene in the film, because it was articulating something I hadn't said but I had felt. I really liked it and I thought that it was right. I think you do feel the ghost of what could have been in that scene."

We all remember that somewhat infamous scene, for some, it sent rage rippling across our skin. For others, it was about two vulnerable people connecting. "It's a really haunting scene," Watson admits. "It's funny because it really divided people. Some people loved that scene and some people really didn't."

"Yes, some people utterly hated it. But that is true of so many really good scenes in books and films; they evoke that strong positive/negative feeling. I was fine with it, I liked it," Rowling says.

On the final product of that scene, she praises Watson's interpretation and skills, saying, "You got it perfectly, you got perfectly the sort of mixture of awkwardness and genuine emotion, because it teeters on the edge of 'what are we doing? Oh come on let's do it anyway,' which I thought was just right for that time."

Watson then brings up an interesting point: "I think it was just the sense that in the moment they needed to be together and be kids and raise each other's morale."

To which Rowling gives the intel, "That is just it, you are so right. All this says something very powerful about the character of Hermione as well. Hermione was the one that stuck with Harry all the way through that last installment, that very last part of the adventure."

"It wasn't Ron, which also says something very powerful about Ron. He was injured in a way, in his self-esteem, from the start of the series. He always knew he came second to fourth best, and then had to make friends with the hero of it all and that's a hell of a position to be in, eternally overshadowed. So Ron had to act out in that way at some point."

Rowling adds, "But Hermione's always there for Harry. I remember you sent me a note after you read Hallows and before you started shooting, and said something about that, because it was Hermione's journey as much as Harry's at the end."

"Yes, her sacrifice was massive, completely," Rowling agrees. "A very calculated act of bravery. That is not an 'in the moment' act of bravery where emotion carries you through, that is a deliberate choice."

The topic of Hermione and Ron's relationship then comes full circle. "Oh, maybe she and Ron will be alright with a bit of counseling, you know," Rowling says. "I wonder what happens at wizard marriage counseling? They'll probably be fine. He needs to work on his self-esteem issues and she needs to work on being a little less critical."

Watson then points out that perhaps Ron becoming friends with Harry was fate, taking on his "biggest and most painful fear" was the right journey. "That is so true, it has happened in my own life," Rowling asserts. "The issue keeps coming up because you are drawn to it and you are putting yourself in front of it all the time. At a certain point you have to choose what to do about it and sometimes conquering it is choosing to say: I don't want that anymore, I'm going to stop walking up to you because there is nothing there for me. But yes, you're so right, that's very insightful!

"Ron's used to playing second fiddle. I think that's a comfortable role for him, but at a certain point he has to be his own man, doesn't he?"

Then, Rowling puts to rest that notion that Ron and Hermione shouldn't have been together, noting that they balance each other out. "Just like her creator, [Hermione] has a real weakness for a funny man. These uptight girls, they do like them funny," she says.

"It's such a relief from being so intense yourself – you need someone who takes life, or appears to take life, a little more light heartedly."