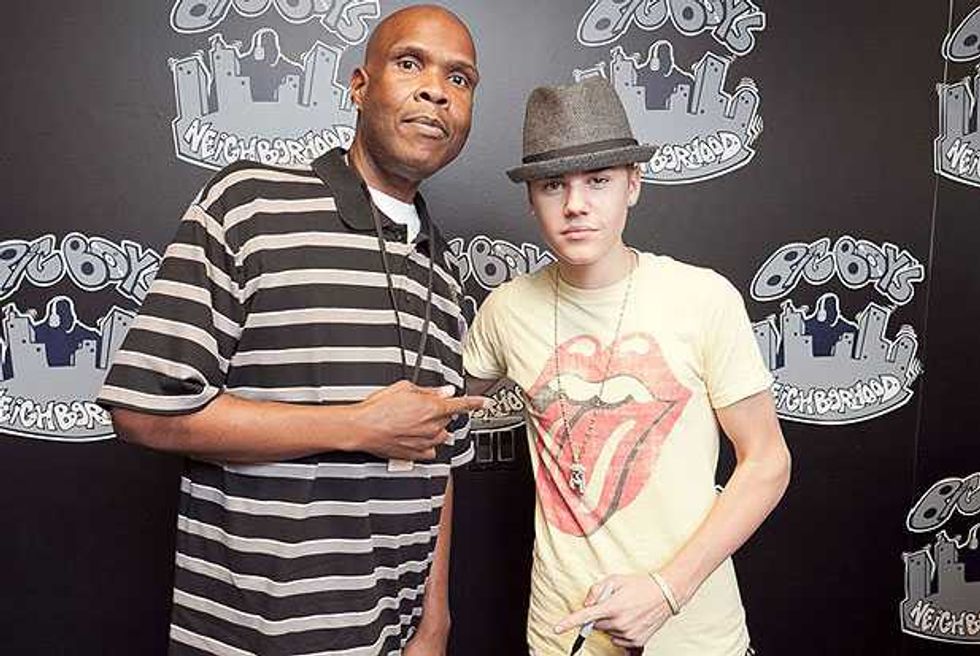 You got the kid in the Power 106 studios, you know he's gotta do a freestyle. All right, so Justin Bieber probably wasn't actually making up his "Otis" rap on the spot at the studio (he's not that good, at least not yet), but still, his flow is fairly impressive for a relative novice, and the way he interacts with the original song—singing "Justin-Biiiieeee-ber" over the "Never leeeeave her" part of the hook, semi-quoting Kanye with "I thanked Jesus at the awards, I'm never going to hell," talking about all-back Benzes—is legitimately clever. The station DJ's are clearly impressed, and so are we, even if there's still a clunker line or two to be had ("Started playin' drums when I was two / Now I kick it in Japan, Kung Fu") and at least one guaranteed to scandalize somebody ("Get it done abundantly, she wants to get up under me").

Watch the freestyle below, and if you're not live for audio, we've even done you the favor of transcribing the Bieb's flow underneath.

Damn, damn, JB where the hell you been

Yeah I got a new necklace, diamonds

Makin' Mama so proud that she cryin'

But I never knew that dreams really come true

Started playin' drums when I was two

Now I kick it in Japan, Kung Fu

So I'm heading for the gold, I'm sweating

I swear Otis Redding would be oh so ready

I already got ahead-y of the game, I'm with Kenny

And we steady gettin' many, I mean money, uh

Ridin' in the all-black Benz with the all black rims

And we looking' at some tens through some all-black lenses

I thanked Jesus at the awards, I'm never going to hell

Call me Zach Morris, I'm saving you by the bell

Personally, I think she is perfectly perfect

Get it done abundantly, she wants to get up under me

Possibly and probably you're thinkin' this type of swag's impossible

And logically well probably but you just hear me lyrically

Try to feel me spiritually get out your mind literally

There's a bigger me inside this little me, screaming out

I should make history, I am like a mystery

Hated by jealousy, 'coz they envy me

Run up on my enemies, see if they remember me

Soon as they remember, I wipe away they memory

Can't you see the private jets flying over you?

I ain't even Otis but my focus on my photos

Might be bogus, no they shouldn't be a photo shoot

Playing with the camera claiming that "it's not mine"

And my fans are like my glasses, yeah, without 'em I'd be blurry