Justin Bieber Is a Victim of Our Post-Truth Media Landscape 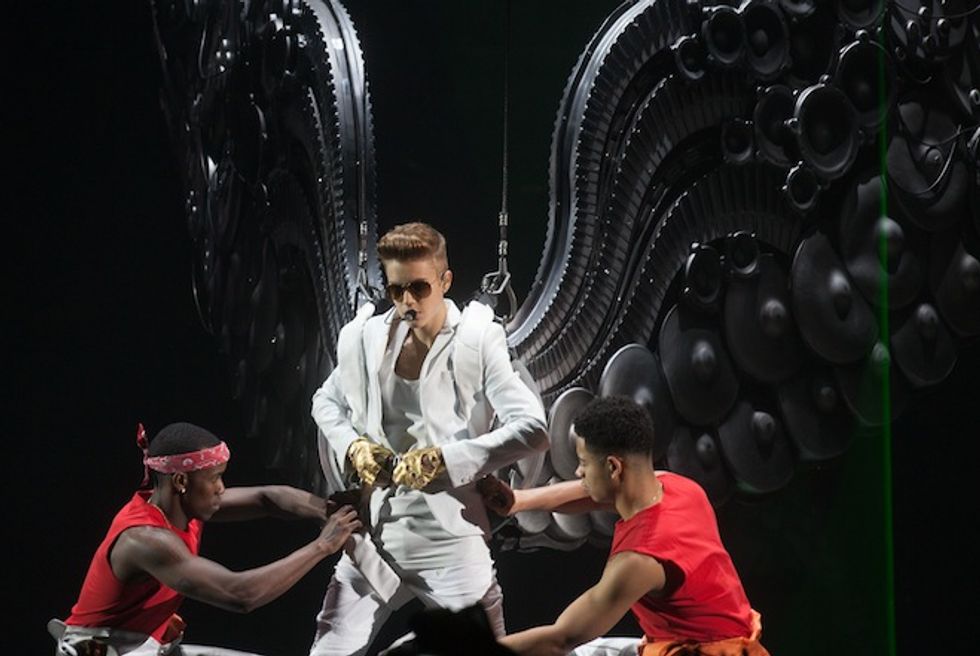 Justin Bieber's not having a meltdown: He’s having a meta-meltdown—a meltdown over the fact that people are saying he's having a meltdown. These are the concrete facts at our disposal: Bieber tweeted "worst birthday," he collapsed onstage and he canceled a show in Lisbon. Everything else is a media interpretation, and it's that interpretation that Bieber has been taking issue with. Read his Instagram rant again; those are the words of a kid who wasn't clued in to the Church of the Savvy, who can't fathom why a bunch of people he doesn't know are printing lies about him.

It's worth remembering how young Bieber is, and how long he's been famous. The guy spent the first 3/4 of his life completely anonymous, and then the last quarter as the most famous boy in the world. He had no apprenticeship in the Disney empire, no reality-show incubation period. Is it any surprise that he isn't able to navigate this landscape as well as someone like Taylor Swift, who can spin a simple walk in the park into exactly the headlines she wants?

Here’s the kind of dizzying truthiness Bieber has to contend with: Back in January, Buzzfeed published a horrifying story about the #Cut4Beber hashtag, a Twitter trend where fervent Beliebers cut themselves in an attempt to get Justin Bieber to stop smoking weed. After being informed that #Cut4Bieber was in fact a 4chan hoax, Buzzfeed kept the post up with its original headline ("Teenagers Cutting Themselves To Get Justin Bieber To Stop Smoking Weed Is The Worst Twitter Hashtag Of The Year") and added two notes explaining the the origin of the hashtag—but even those doubled down on the story's viral buzz: "[M]any if not most of the photos are fake, but [that] does not change the fact that this hashtag is the worst."

This is the media environment creating the Image of Justin Bieber. It's one where posts are sourced off of tweets, where who's-unfollowing-who is a valid storyline, where rumors are spread with the thinnest of "the tabloids are saying" pretenses. In short, it's one where one where facts come second to virality.

There's an unspoken agreement between writers and readers that not everything that's published is going to be 100% true. (Witness the recent rise of fanfic-style celebrity reporting.) The only ones who get up in arms about misrepresentations of their idols are the hashtag armies—and since their grasp of reality can sometimes be tenuous, they are easily dismissed.

And Bieber himself has toyed with this unreality: In October Justin had everyone (including us) convinced that someone on Twitter was about to release shocking footage pilfered from Bieber's stolen laptop. When the "hacker" released the footage, it turned out to be Bieber's "Beauty and a Beat" music video. (In an ironic twist, the #Beliebers were the only ones not duped by the hoax.)

Of course, we don't have all the facts. Maybe our narrative is incorrect, and Justin Bieber really is melting down because of drugs, alcohol, a gambling addiction, you name it. But if we're wrong, who cares? We'll just update this post tomorrow.