Lady Gaga Wants To Spawn Little Monsters Of Her Own 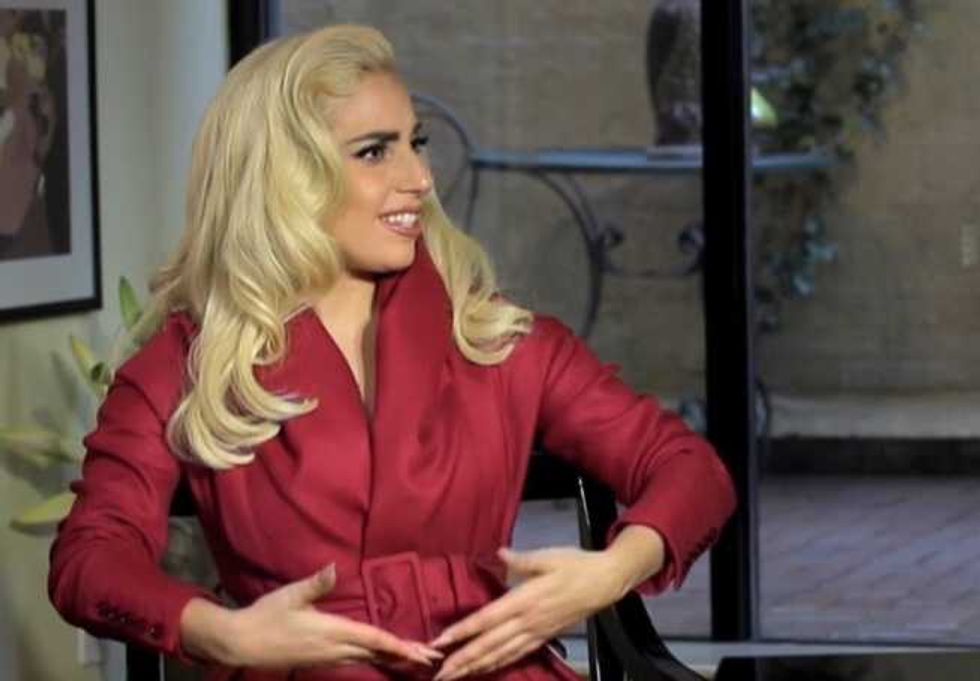 When you've already starred in your own HBO special, invited Katie Couric to Thanksgiving dinner and had your songs immortalized by the cast of Glee it can be difficult to find a new way to draw viewers into your latest television endeavor. Unless you team up with Oprah Winfrey. As you've heard, Lady Gaga sat down with the Empress herself, to fulfill this period of relative Gaga deficiency with two hours of chit chat, plus a cameo from Mrs. Germanotta and a look inside her New York home. Where to begin? While discussion around her relationship status and love life has never been much a priority, Winfrey broaches the subject of children to get the singer thinking about the future. "Yes, I want kids, I want a soccer team and I want a husband," she said in a new clip from her interview premiering Sunday at 9 p.m. EST. "Yeah, I do. Well, you know, I'm being superfluous. I don't want to have one kid. I want to have a few."

Her thoughts on motherhood are probably important to her most devoted fans—will she one-up Beyoncé and perform live well into her third trimester? What eccentric baby name will she come up with? But if this is truly her last televised discussion before going into a long period of media hiding, surely she'll be hitting on topics other than her ovulation calendar. Here are a few things we hope to hear Lady Gaga talk about:

-Plans for the upcoming Born This Way tour

-Thoughts on the passing of Whitney Houston

-Who she's voting for in the presidential election

-Her favorite character from The Wire

-A trendy superfood that will eclipse kale

-The best eye makeup (and skin appendage) remover on the market

-What it feels like to wear a prosthetic penis

-Whether she favors The Wanted or One Direction

Obama Uses Colo. Program As Backdrop For Health Talk [U]

From NPR News, this is ALL THINGS CONSIDERED. I'm Guy Raz.

President Obama is touring the West this weekend, hiking with the family at national parks, even as he continues his long, hard slog toward a health care overhaul. In his opening remarks to a town hall meeting in Grand Junction, Colorado, Mr. Obama drew applause with this line.

RAZ: Don, I heard the town hall meeting today. I watched it. It didn't seem as contentious as some of the forums we've been seeing. What was the atmosphere like?

GONYEA: This is the third one the president has done this week, and none of them have been at all like the ones that we've seen members of Congress hosting, with angry shouting and everything else. This one, like the others, there is a lot of support for the president, but it doesn't mean everybody in the room wants reform. But what we got here, as we have gotten at the past couple of them, is a great deal of respect for the office of the presidency and a chance for people to stand up and ask him questions that aren't so much pro/con questions - though we did get some of those - but questions just about how this might work.

RAZ: But he did get some challenges there, Don, right?

GONYEA: Well, he did. We had - about two-thirds of the way through this a-little-over-an-hour-long event, a young man stood up. His name was Zach. He is a college student. And give a listen to what he put to the president.

ZACH (Audience Member): My question is this: We all know the best way to reduce prices in this economy is to increase competition. How in the world can a private corporation providing insurance compete with an entity that does not have to worry about making a profit, does not have to pay local property taxes, they do not have to they're not subject to local regulations. How can a company compete with that?

RAZ: And Don, the president seemed to acknowledge some of Zach's concerns.

GONYEA: The president said: That is a good question, Zach, and that is something that we need to talk about. Now, the president advocates a public option as one piece of the nation's health care system. He stressed he does not want a government takeover of the U.S. health care system. But he said that if a government option is a well-run nonprofit that really does have to function efficiently, then he does think that it won't necessarily be unfair to ask private insurers to compete with it. And he noted that Blue Cross Blue Shield is nonprofit. And he said further, as part of the answer to this question, that there are private companies that compete with the government and do quite well. He said look at FedEx and UPS competing against the post office. in our site grand junction colorado

RAZ: Don, did you get to talk to anyone in the audience afterward? I mean, did the president seem to make his case to the skeptics in that room?

GONYEA: Well, here's the thing: People are appreciative that he has come, that he comes to take these questions, but that the skeptics I talked to walked out skeptics. You don't get the sense that he's changing a lot of minds. But maybe the thing the president wants to do most is to at least knock down some of the misinformation that is out there and try to have people perhaps be not so afraid. But again, the people I talked to who walked in opposed to a government option, for example, walked out opposed to a government option.

RAZ: So I guess this is really his attempt to kind of retake take the debate.

GONYEA: Exactly. He knows that the critics are out there, and that they are spending a lot of money and they are organized and they are trying to convince people this is a bad idea. So he's got to be out there, too, even on a beautiful Saturday afternoon

RAZ: And so do you. That's NPR's White House correspondent Don Gonyea. Don, thanks so much.