Let's Analyze The Lyrics To Adele's "Set Fire To The Rain" 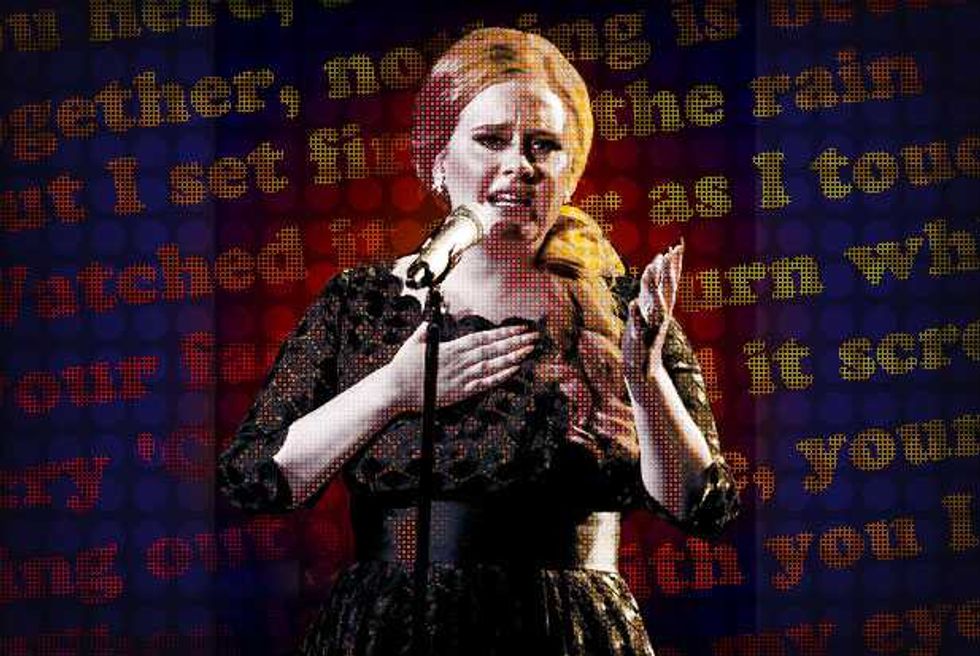 The world needs more commentary on Adele's year of dominance like Adele needs a throat-coat smoothie made of battery acid. She's the girl with the golden bouffant, the diva next door, the pride of Columbia Records and raw fuel for pundits. But there's one obvious question critics have yet to answer: what do her songs even mean?

Heartbreak, yeah, authenticity, whatever, angst, OK. But literally--what do they mean? “Someone Like You" is obvious, but although “Rolling in the Deep" hit No. 1, moved millions (emotions and sales) and earned plaudits and sales records and VMAs and probably soon Grammys, nobody has definitively translated “rolling in the deep." The phrase just sits there in the chorus like an overgrown island, disconnected from everything before and after. It could mean deep feelings as easily as deep seas (metaphor or not for deep feelings) or Deep Blue.

The Internet doesn't help. Yahoo Answers (seriously, this is how little info there is on what "rolling in the deep" means) thinks it's a nautical thing, except they don't know "shit." The Straight Dope message boards quote a secondhand Wikipedia article claiming Adele was gonna the British slang term "roll deep" but figured it'd be less confusing (and less suggestive of a future grime collaboration) to make it truly meaningless. In other words, specifics don't matter; “rolling in the deep" means both nothing and whatever it means to not have it all.

And then we get to “Set Fire to the Rain," a title everyone would mock if it weren't Adele. Rain does not catch fire, nor does it burn. The mixed metaphor's not even tucked away in the song like some wonky second-verse line; it's right at the top of the chorus, the barb that sinks the hook. It's almost tempting to view its becoming a single as a deliberate joke, a prank on the public to see just how much nonsense they'd accept from a No. 1 hit.

Except there's more nonsense in that last sentence. “Set Fire to the Rain" is only a single because Columbia, halfway through deciding just which chuckle to showcase in their “Rumour Has It" promos, glanced at iTunes and noticed the hundreds of thousands of sales for some measly deep cut. The public practically willed it into hitdom, or at least into PR. Clearly someone understood it, and understood it deeply enough to elevate the from album abyss.

"Abyss," incidentally, is a word this song would totally use. The first verse alone could accommodate it quite well:

I let it fall, my heart, and as it fell, you rose to claim it.
It was dark, and I was over
until you kissed my lips and you saved me.
My hands, they're strong,
but my knees were far too weak
to stand in your arms
without falling to your feet.

It's a mistake to interpret anything literally in a song called "Set Fire to the Rain." But even interpreting this not as an aortal splat but Adele merely losing her grip over the feelings she'd prefer to control and parcel out (as "Rolling in the Deep" and "Someone Like You" both do), you've still got one heart falling and one man rising. Spatially, this only makes sense if Adele is ten feet up a pedestal (she'll no doubt stage this in ten years, but not quite yet) or her guy's rising and groaning up from underground, maybe Hades. But he's turning those tables; the gesture-ready strength of Adele's hands doesn't keep her from falling small while he stands tall.

You could shrink this entire verse into one mundane declarative sentence: "we made out," or if you're feeling a tad more romantic, "I fell in love." But this is a more momentous sort of love (or making out). Every detail is blown up to weepie proportions. The guy doesn't just win or steal her heart; he claims it, like he's Fortinbras or something. It was dark, like a stormy night; she was "over," until he saved her from... well, something, at which point she falls to his knees when hers buckle. Adele's never been averse to the stray poetaster's line (see "Someone Like You"'s "We were born and raised in a summer haze," or the entire first verse of "Rolling in the Deep"), but the drama here's pitched somewhere between a bodice-ripper and a 14-year-old's Livejournal.

But there's a side to you that I never knew, never knew All the things you'd say, they were never true, never true
And the games you'd play, you would always win, always win

This does two things. First, it's deliberately vague--he certainly said some things, and he's definitely got a bad side, but which things and what side is left to the listener, to fill in with his or her own traumas. There aren't even gender markers. Were you cheated on? That's a side to him that you never knew, never knew. Did she say she loved you beforehand? That was never true, never true. The words can apply to almost anything.

But it's also completely crafted, down to the cadence and the meter. Every word's parceled out just so, and every melody's the same way; you keep returning to the home note, as if you're thinking and rethinking the same things (that were never true, never true.) It's at once formal and dramatic, brooding and contained; it's as if you wrote a sonnet (complete with iambic pentameter and rhyme) for your feelings.

But I set fire to the rain Watched it pour as I touched your face.
And it burned while I cried
'cause I heard it screaming out your name, your name.

There's only one way to make sense of this chorus: to picture it. Adele sets fire! to the rain, because she's in a state where that's possible. And once she does, there's fire blazing and there's rain pouring; there's screaming and touching and burning and crying, all in one burst of growled notes, pain and flammable rain. You couldn't get more melodramatic if you had the cinematographers and art directors of Titanic, The Notebook and Twilight at your disposal; in fact, it might go beyond melodrama. It's a love scene, a wrenching breakup and an explosion all at once, and it's the ultimate expression

Up until here, the bridge, the second verse's fairly self-explanatory: they're lying in bed, it feels great, the end, time for setting FIRE! to the RAIN! and that sort of drama. But this verse benefits from a bit of thought. Specifically, thought about "sometimes I wake up by the door." What? You can interpret this in two ways--either she's waking up by his door, which is a pretty substantial and worrying blackout, or waking up by her own door, which is still not a place one wants to fall asleep. But they're both rather unlikely; chances are, she didn't actually wake up by the door. They're the same chances that her heart's waiting for him, even though he's already caught it; they're the same chances that going out looking for someone who's already done with you will be useful or help you feel better at all. It's one long stream of increasingly illogical, increasingly fruitless attempts to un-see the side that she never knew, un-hear the things he said that were never true, and to stuff everything down until nothing fits and there's only one release: the chorus.
None of this explains how you can set fire to the rain, of course, but it doesn't have to. All it matters that it's impossibly dramatic, dramatically impossible. It's probably not a surprise that "Set Fire to the Rain" became 21's latest single. If you've never really listened to an Adele track outside loudspeakers and cultural osmosis, this is exactly what you're probably imagining: overblown, overheated.
Maybe it's not so weird that this is the latest 21 single after all. The public demanded drama, the sort of Adele single people who haven't really listened to Adele singles outside parodies think of: overdramatic, overblown. There's something to be said for the poise and steel of "Rolling in the Deep," or the soft, understated resignation of "Someone Like You," one of which spends more time talking about the revenge Adele'll get sometime later and one of which is the final step after a breakup from trauma to nothing, the one that starts its chorus "never mind." But sometimes those tracks are too subtle. Sometimes you want to continue feeling like you're in a movie, flinging fire everywhere while the very air screams. Entire artistic traditions have been built on this; what's one more No. 1 song?