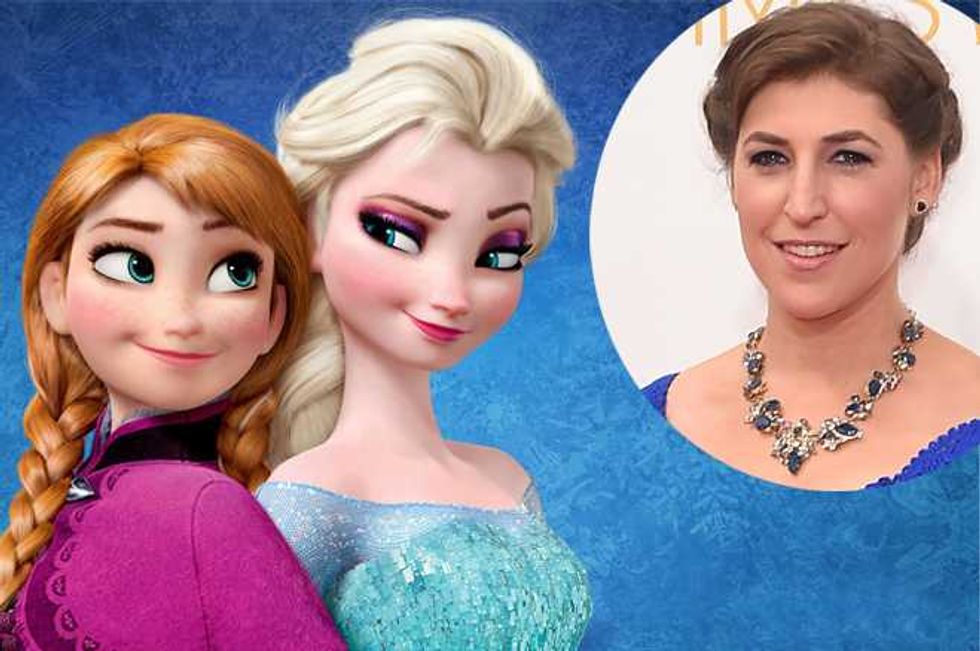 The actress wrote a long-ass blog post about how crappy she thinks the 2013 Disney superhit is, and admits lots of people won't agree with her.

Her problems with the film? SO DAMN MANY, and mostly just total nonsense. Frozen is not feminist enough. Frozen is anti-men. The female characters in Frozen are exaggerated and look like dolls. The storyline sucks. The animation sucks. EVERYTHING SUCKS!

On Frozen being anti-feminist:

"I've had just enough already with this finding a man business in most every kids' movie. Disney classics were all about this and look where it's gotten us! Naked billboards of singers and women still not paid equal pay for equal work and ridiculous standards of beauty and body image and campaigns such as 'Why I Don't Need Feminism' and tons of other things proving we still have a ways to go."

Yes, Mayim. The gender pay gap is because of DISNEY. Jeeeeez.

On how romance is bad:

"Sure, it's sort of hidden, but the search for a man/love/Prince is still the reigning plot line in the movie, as it is with pretty much all movies for young people which are animated. The sister's desire to marry this guy she just met, and the other sister getting mad at her–we still have a plot about the identification of a woman being based on her desire and search to meet a man."

Hate to break it to ya Mayim, but little girls are obsessed with the idea of romance and a Prince Charming. It's a part of what makes childhood so magical.

On Frozen being anti-men:

"Denoument is French for the unfolding of a story–the final unraveling, as it were. What happens in Frozen? The Prince/hero turns out to be a scheming villain. He pretended to love her and then he double crosses her and she gets the lesson taught to her not to trust those nasty scheming conniving men. Because you know, men can't be trusted? Meh."

First of all, the decent male characters FAR outnumber the few villains. Secondly, would you rather have another Ursula the Sea Witch? She was female and a total nightmare. Oh, and it's spelled "denouement", honey.

On how the female characters are pretty and make her feel bad about herself (because that's really what it's all about):

"They have ginormous eyes. Like really ridiculously big. Teeny-tiny ski slope noses. Exaggerated delicate ski sloppiness, actually. Barbie doll proportions of their bodies in general: tiny waists, ample busts, and huge heads. They look like dolls. They don't look like the same species as the male characters even! What's up with that?! My sons thought the females looked like BRATZ dolls, truth be told. I kind of agree."

Oh, Mayim. It's a friggin cartoon. No one looks like Belle, or Ariel, or Jasmine in real life. That's kind of the point. It's a fantasy!

The truth is Frozen doesn't measure up to The Little Mermaid, or The Lion King, or Aladdin. But little kids just love it, so to nitpick on those frankly ridiculous little issues is kind of petty, don't you think?

You can read Mayim's full complaint right here but we recommend staying put and singing along to the video below :).