Meet The ‘Wobbly’ Comedian With Cerebral Palsy Who's Redefining ’Normal’ 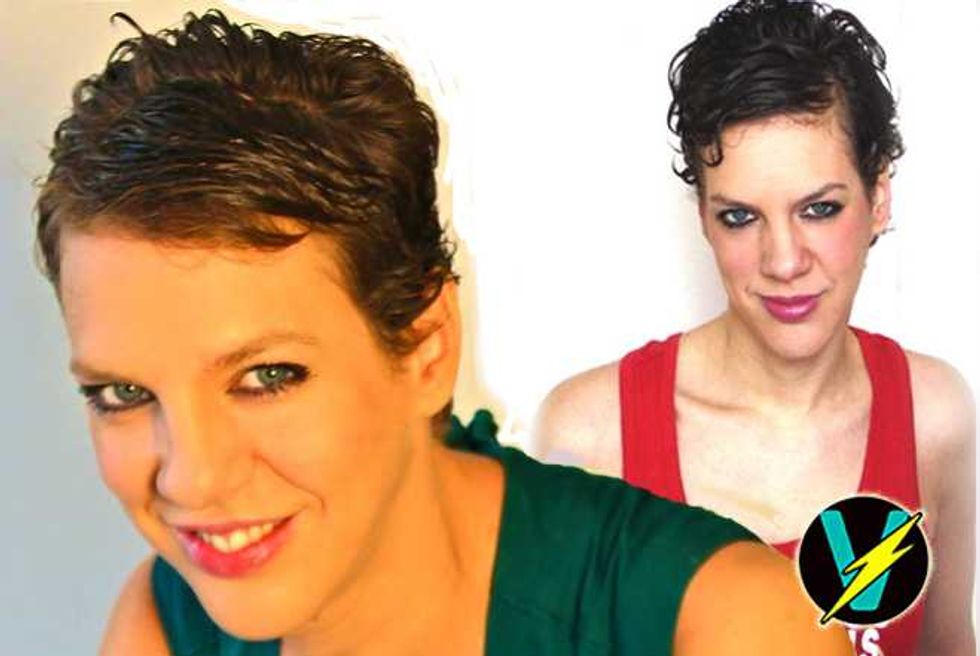 Francesca Martinez may well be ‘wobbly’ but she would very, very likely kick your ass given even half a chance….

It’s not easy being a woman in today’s age. Sure it’s better than it was maybe 50 years ago, but improving on a broken system doesn’t mean it’s fixed. Add in being a female comedian and you’re definitely making things hard on yourself—breaking into that notorious boys club? Trying to make our lady experiences funny? Good luck! Throw in having a disability and you’re really fucked.

You should probably ask Francesca. The 35-year-old Brit has all those titles to throw under her belt. She was diagnosed with cerebral palsy when she was two, and her parents were told by doctors that she would never lead a “normal life.”

But how can we attribute the word “normal” to our lives when it’s the only one we get to experience? What can serve as a fair comparison?

As Martinez explains in an interview with the NewStatesman, certain titles lose their meaning when put into the context of one’s own life.

She says, “Normal is what you’re used to, that’s what normal is. I don’t think I’ve got ‘cerebral palsy.’ To me, I’m normal, and I would wager that most people with disabilities feel like that.”

Martinez officially broke into the comedy industry after winning the Daily Telegraph Open Mic award for her gig at the Edinburgh Festival at the age of 22. She’s since written a book that's gained the attention of high-profile comedy industry individuals, like Russell Brand, Jonathan Ross and Steve Coogan.

What the **** is Normal?! Is an amusing autobiographical tale that comments on society’s definition of normalcy all while detailing Martinez’s struggle to overcome it.

And, in traditional comedic style, the book comes with a laugh-worthy disclaimer. Martinez takes the opportunity to mock society’s tendency to label any disabled person who achieved something as “An Inspiration.”

Sure, maybe some of Martinez’s struggles are unique to her. But the book’s greater theme revolves around something we can all appreciate: feeling the pressure to conform and be normal.

Martinez says, “Even though my journey was unique in some ways, actually it was universal. Because they’re battles we all struggle with: questions of self-acceptance, confidence, happiness, goals. How do I see myself? What do I value? And I realized they were questions that we all ask.”

Sure, we all struggle from time to time with body image and lack of self confidence..but disability? How do we talk about that? What do you have to do, or be, to even warrant that label?

At least according to Martinez. She says, “I became aware that I could pick my own label. So I started calling myself ‘wobbly’ because it’s cool, and not scary, and it’s not judgmental and it doesn’t make me feel like some kind of medical abomination.”

While Martinez most definitely exudes a certain confidence about her, she wasn’t always so self-assured. She revealed, “High school was very difficult because up until that time, I’d felt really capable, normal, loved and very confident. And what happened when I went to high school, there was a huge clash between how I saw myself and the others saw me, and it was a massive comedown to realize the two did not compliment each other at all.”

“It was a huge shock to realize that everything I felt was unimportant like how I walked or talked or moved or wrote, or how I dressed, were the very things I was being judged on. And over a period of about a year or two, my confidence completely eroded away…” she added.

But luckily enough, things started to turn around. And that transition was sparked by a conversation with a boy....What else?!!

When speaking to the boy (named Dylan), in a Soho pub, he told her, “You’re not ‘brain-damaged.’ You don’t have ‘cerebral palsy.’ Those words are vague attempts to try to define you. Your brain is your brain and you are perfectly you.”

That was a game changer.

Martinez says at that moment he “shattered everything I’d assumed, and he made me realize that nobody is normal, and rather than brain-damaged or disabled, I was Francesca. And that realization lifted this huge weight off my shoulders.”

And so it goes. Martinez eventually fell in love with Dylan. And then eventually broke up with Dylan (turns out he was a total “arsehole”). So it goes, right?

Throughout the world tours, the high-profile gigs, the celebrity interactions, Martinez has managed to handle the good, the bad and the ugly of it all. Just like everyone has to do – and especially so when dealing with the entertainment business.

And she’s done it all despite the additional prejudice she’s had to take on throughout her career in comedy. She says, “People when they see me don’t go ‘oh my god, she’s a woman!’, they go ‘she’s wobbly!’ I’ve never had sexism in the same way. If I get an ‘ism’. It’s wobblyism. The fact that I’m wobbly and a woman does terrify TV commissioners.”

So there you go. She’s a woman. She’s a comedian. She’s got cerebral palsy. But come on, don’t make a thing out of it. She’s Francesca.

And she’s been dealing with all the wonderful, awkward, horrendous, ugly, rewarding and crappy parts of life for as long as she’s had it.

Doesn’t that sound familiar? Yup it does.... 'cause let's face it, that’s everyone’s experience really at the end of the day. See how easy it is to illuminate our commonalities?