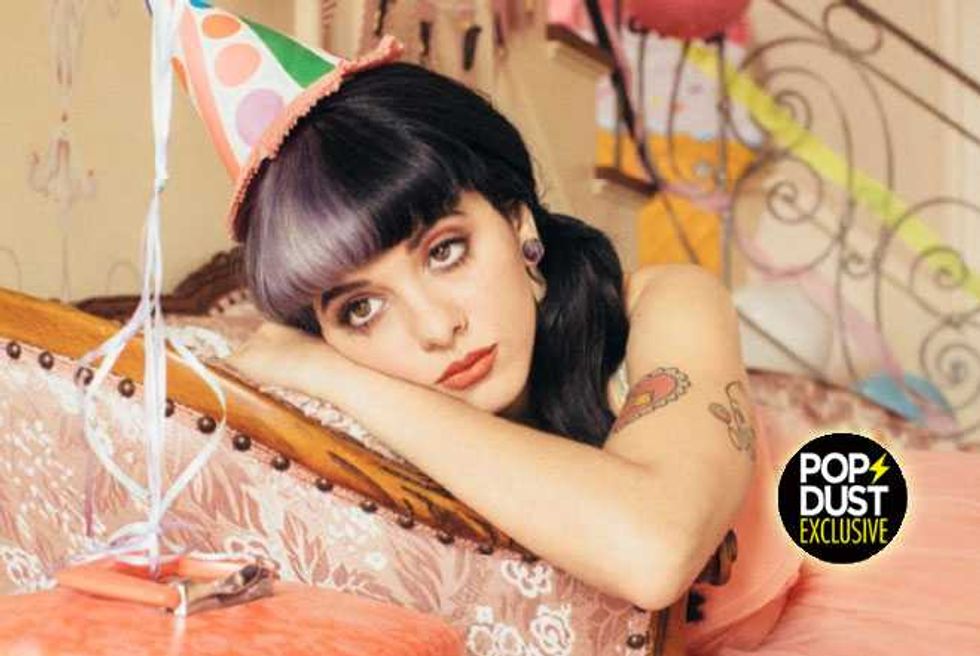 Melanie Martinez is trapped by her own twisted and oddball creativity, and that's a great thing. With her current single Pity Party (which samples Leslie Gore's 1963 classic It's My Party) and the intense music video, she smolders through the pop branches with a glowing torch of fiery passion. She's unapologetically herself, and her forthcoming Cry Baby debut full player (out August 14 on Atlantic Records) is no exception. She casts out a genre-defying net, which ultimately encompasses a massive sonic and thematic examination of the world around her. "The entire album is a fairy tale, in a way. It's all a story," she shares to Popdust in an exclusive interview. "They are all individual things that happen but all part of a bigger picture. I’d say the whole album is an actual story. I’m planning on doing a storybook, too, inside of the physical copies."

Illustrator Chloe Tersigni signed on to sew together a magical portrayal of Martinez's work, the singer-songwriter reveals. "[She] is an amazing illustrator, absolutely incredible. She did a lot of fan art for me awhile back. I loved her work so much. We started talking, and I gave her all these ideas for each song and the story. She was able to illustrate everything. It’s breathtaking. She did all the illustrations for all the vinyl packaging and storybook. It’s going to be really cool."

Pity Party most certainly sets the stage for the next level of her career, following her equally-engaging 2014-released Dollhouse EP—the moody and freaky Carousel was featured in numerous promos for American Horror Story's Freak Show installment. "[My fans] seem to really like [the song]. I’m super happy," she says. "The video was super intense and fun to do. It’s cool because a lot of the fans are super young, so some of them don’t even know ‘It’s My Party’ by Leslie Gore (which is crazy to me). But now they do, and it’s really awesome that they are getting into that." The specific decision to sample Gore came rather organically in the studio, she says, "I wrote it with Kara Dioguardi and CJ Baran. When we were in the studio, I was describing the whole theme of my album. We were talking about no one showing up to my birthday party. Kara kept saying my voice reminded her of Judy Garland, kind of that old, classic voice. We were looking through songs of the Fifties and Sixties to get inspiration. Then, that song popped up. We were like ‘oh my goodness. That fits perfectly with the whole idea.’ I thought it would be fun to challenge myself into writing from that story. It’s definitely the hardest song for me to sing. I had to push my voice a little more than I’ve ever done."

Taking a spin in the director's chair, not-so-surprisingly, wasn't too far off from her normal involvement in her own work. She explains:

"That was the first time I ever had the ‘director’ title. I’ve always been so involved with my music videos. I write all the storyboards. I’m obsessed with the visuals of everything and love for it all to be super cohesive. I’m used to figuring out the videos. It’s hard for me to put that into someone else’s control. This is my third video, and I just wanted to do it myself. It’s really hard for people to understand what I’m talking about. I’m happy that I did it. It pushed me into this world where I can keep doing that and get better."

The song itself has a much-wider role in the texture and through line of her album, too. "The song is all a part of a story of this character, who is technically me. Her name is ‘Cry Baby.’ That’s what the whole album is about," Martinez says. "It’s about her life and what she goes through. That song is after she falls in love for the second time and truly falls in love. She invites him and all her friends to her birthday party and no one shows up. I’ve never had that happen to me, but it’s fun writing stories like that. I wanted make it all blend together."

Elsewhere, she addresses issues like plastic surgery (on Mrs. Potato Head) and young love. "‘Training Wheels’ is the story right before ‘Pity Party.’ It’s the first love song I’ve ever written, honestly," she shares. "It’s interesting because I’m not used to writing happy songs like that. I wanted to challenge myself in that way, too. It’s about being OK with being in love. It means he’s riding a bike with training wheels, and I want to take them off and go to the next step. I wanna ride a two-wheeler with you. That’s the whole point of the song. That’s my mentality, and then ‘Pity Party’ happens. And now I’m just a wreck and completely insane."

Quite recently, Martinez filmed two additional music videos (release dates TBD), and gave a few teasers, hinting, "I’m really excited for these. One of them is a kind of part two of ‘Dollhouse,’ kind of what happens in the kitchen. It’s really, really dark. It’s really hard for me to not think about the narrative of a video. I’m so stuck on making sure the visual tells the story. But I want to just make the other one a one-shot, emotional video and make it where you can see it in one shot. Whether it’s a performance or a slow build-up of lights, [I'm not sure]. I’m trying to figure something out for that one. I want it to be different than the other videos."

For fans unaware, there will be two released versions of the album, one explicit and one censored. On going back to the studio to cut censored versions of some of the album's tracks, she recalls: "I’ll be honest with you, I think I have more explicit songs on my album than a rapper. Some of them, we bleeped out words or dropped out words, instead of replacing it. I always feel weird about replacing words with 'really' instead of 'fucking.' It’s so weird and unnatural to me. In the moment, I wrote it that way because it was an emotional thing and I blurted it out. That’s why I hate censored versions, but I do understand why they’re necessary for moms and kids."

Martinez then launches into a little game we like to call "9 Pities for the Party," a fast-paced party-themed Q&A session. And go!

1.) What is your favorite kind of cake?

I love chocolate cake with vanilla frosting and lots of sprinkles.

Yes! Rainbow sprinkles are the best.

2.) What is your favorite birthday memory?

Honestly, I’d say the funniest birthday memory I have is I was really obsessed with Barney growing up. My parents thought it was a good idea to have Barney come to my third birthday party. They had Barney and a really creepy clown. There are pictures. This is documented. They are the weirdest pictures ever. I was actually planning on using them as tour posters or something. There’s one of me crying. I was so upset and terrified of Barney. I stopped watching the show after that. I didn’t want to like him anymore. I love Barney now, but it was just a rough time for a little bit. [laughs]

4.) A toy you still wish you had gotten but never did?

I think I have been reliving that. All the toys I didn’t have as a kid, I’ve been buying now as an adult. [laughs] I like to collect toys from the Fifties. I have a lot of toys. I can’t be too upset now.

5.) What is your most-prized toy you have now?

I have this one favorite squeak toy. It’s this big bear. He’s an Edward Mobley from the Fifties. It’s the coolest thing ever. He has blinky eyes, but he still squeaks. He’s wearing a cute yellow top.

6.) What are your three party essentials?

You have to have balloons, or else, it’s just not a party. Birthday cake, for sure. And I’m gonna say teddy bears, because if your friends don’t show up, you need someone to talk to. Stuffed animals are the best.

Anything pink. Maybe princesses or something.

8.) If you could invite three people from history to a birthday party, who would it be?

I’d have to invite Leslie Gore, because originally it was her party. You. And probably my dog. She’s really nice. [laughs]

9.) If you could throw a party for anyone, who would it be?

Maybe my grandma. That’d be a really cool party.