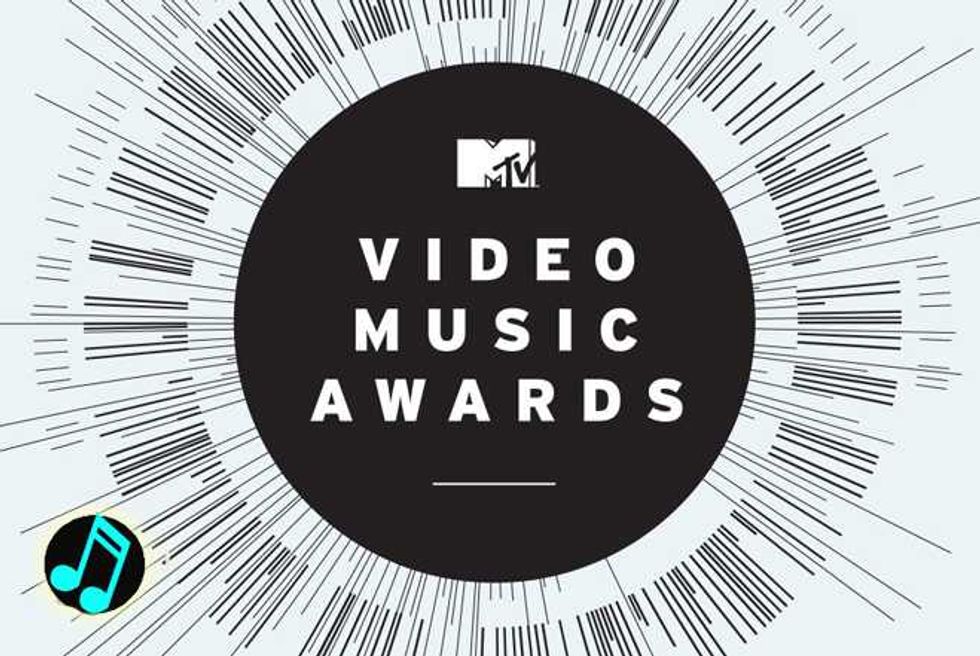 The most controversial night in all of pop music is finally upon us. Following last year's Miley Cyrus and Robin Thicke foam finger-fest, how could the show possibly outdo itself? Our money is on Nicki Minaj, who is set to perform her new single "Anaconda," the lead-in to The Pink Print. Also to perform are Beyonce (also receiving the Michael Jackson Vanguard Video Award), Usher, Maroon 5 (for the first-time ever!), Ariana Grande, 5 Seconds Of Summer, Iggy Azalea, Sam Smith (his US awards show debut), Rita Ora and Taylor Swift (with her brand new single "Shake It Off"). This lineup is giving us life right now!

Are you excited for the #VMAs? Show us how much at http://t.co/z6hGQlyqIg with #VMAParty!

Queen B leads the charge with a whopping eight nominations for the evening, including for Video of the Year ("Drunk In Love," with Jay Z) and Best Female Video ("Partition"). Her searing "Pretty Hurts" has also runaway with nods, with four to the cinematic clip's credit. She faces some pretty fierce competition, though. Azalea and Grande prove to be her most bad-ass competitors, grabbing their own slew of recognition, but who will come out on top? (Love, that is.)

Other notable award nominees include Cyrus ("Wrecking Ball"), Sia ("Chandelier"), Fifth Harmony ("Miss Movin' On"), Ed Sheeran ("Sing"), Katy Perry ("Dark Horse," with Juicy J), Lorde ("Royals") and Eminem & Rihanna ("The Monster"). Of course, that's only scratching the surface. If you need a refresher, check out the full list of nominations below. We'll be updating this space as the Moon Man winners are revealed.

The 2014 MTV Video Music Awards go live from The Forum in Inglewood, Calif. promptly at 9/8c. Keep your eyes on Popdust as we dissect the night's biggest, most booty-licious moments right here!

[9:00] What do you get when you let Ariana Grande, Jessie J and Nicki Minaj open the show?! A "Bang Bang" of a performance, that is. Emerging from a mysterious space ship and decked out in glitter, Ariana kicks things off and takes the stage with "Break Free," her current blockbuster single. (Is it just me...or is she off vocally? Maybe an inner ear monitor problem?) Regardless, the bombshell is killing it. Dance girl dance!

[9:02] Cut to the slayage of Nicki with "Anaconda." Boobs, boobs everywhere. The stage is set with vibrant greens spliced straight from her video. She twerks, "it's bigger than a tower," dropping it down to the floor. Dat. ass. No. words.

[9:04] And now...the flawless Jessie J, looking stunning in a short black 'n white mini and killer heels. She's on top of her game here, launching into "Bang Bang." There's a lace of rock here. Ariana is back, and has fixed her monitor problem. She returns to vocally perfected form. They battle each other, sharing lines, back and forth. And then Nicki's back, covering her jungle attire with a black velvet dress.

[9:08] Gwen Stefani & Snoop Dogg take the stage. Can we stop for a minute and just say...pink is totes Gwen's color. Work it gurl! "Nothing is more west coast hip-hop than the dogg father," she says in their intro. Ha. I suppose so. In the background, you can hear the stage manager calling for Taylor, "Taylor, 1, 2.." So many technical difficulties, so little time.

They hand out Best Female Video..."Dark Horse" by Katy Perry and Juicy J!

"We are gonna party tonight!" proclaims the Queen of Pop, "Thank you Katy Cats!"

[9:12] Jay Pharoah, from SNL, enters, makes some jokes about "Anaconda." Heh. "Ariana Grande is killing it right now," he quips. "I'm attracted to you." He jokes about her needing to come out with a disclosure song about her age. He feels creepy like her, but don't worry! He stalked her Wikipedia page. Oh snap!

[9:19] And, the moment we've all been waiting for. Taylor Swift with her new single "Shake It Off." Behold the gloriousness. A super glam, who wears so much black, intros the performance. "I'm so proud to introduce at the beginning of a brand new era."

Taylor begins laying down, atop men in tuxes. She's chanelling '90s flapper girl right now with that mesmerizing fringe. It's classy. Nice touch. Her back up singers are dressed similarly, but in black fringe. I think Taylor's transition from pop-country darling to bonafide pop superstar worked.

The chanteuse makes her way to the top of a large, glowing 1989 sign. The men beg for her to jump into their arms. She looks down, disgruntled. "Uh. I don't care about the VMAs. I'm not jumping off there. People get bit by snakes…dangerous," says Taylor Swift, as she makes her way back to the main stage.

[9:34] Jim Carey and Jeff Daniels take the stage. They are apparently fans of Sia's "Chandelier," doing their best Sia impression. Dumb & Dumber 2 is coming out soon, so they do a little skit to promote it. Ha. Hilarious. Takes me back, definitely.

[9:37] Kim Kardashian West (ok, are we really doing this?) intros Sam Smith's performance of "Stay With Me." Shhhh, magic is about to happen, people! "It moves you with its honesty," Kim says, moments before the performance.

As you'd expect, Sam focus on a simple presentation, allowing his velvety voice and lyrics to tell the heartbreaking story. Powerful. Best of the night?

[9:46] Common (he's a rapper) takes the stage. "For the past two weeks, the eyes of the nation have been on Ferguson," he says, intro'ing a moment of peace for Mike Brown and peace in this world. I can feel the tears coming. He goes on to talk about hip-hop and it being a genre of change.

He then hands out Best Hip-Hop Video...“Hold On (We’re Going Home),” Drake featuring Majid Jordan! (Drake couldn't be there to accept it. Boo.)

[9:55] Taylor Schilling, Uzo Aduba and Laverne Cox (of Orange Is the New Black, of course) intro Usher's foggy performance of "She Came To Give It To You"! His self-titled debut album is now 20 years old, but damn, he has the hot moves. STILL. Be still my heart. A nice throw-back style performance, with very little frills but that's just enough. Phew!

And cue, Nicki Minaj! This time, she's mostly clothed, with a luscious white fur scarf around her neck. Well, this is a nice change of pace for the rap diva.

[10:06] Nina Dobrev stuns as usual and, along with Trey Songz making a joke about getting behind girls, hands out Best Rock Video..."Royals" by Lorde! (Yea...not rock by classic standards, but can't fault her or the song. Congrats!)

"Is there a certain place I should be looking?" She says. Aww. So adorable.

[10:14] Chloe Grace Moretz and Dylan O'Brien (both looking super cute) introduce 5 Seconds Of Summer's performance of their current single "Amnesia." Yep. I admit it proudly, I love this song and them. As far as punk throwback style wrapped in great pop hooks and real stories, they're on to something.

Oh, and if you missed it, the boys won Best Lyric Video during the pre-show for "Don't Stop." Congrats, again!

[10:24] And once again, Jay Pharoah comes out. He's about to announce the Artist To Watch winner...FIFTH HARMONY!

So many feels right now. I'll say it again: They are the BEST thing to come out of the now-defunct X-Factor series. On to bigger and better things, girl! #BOSS

[10:26] Not-so-smooth transition to a short tribute to the late Robin Williams, set to Coldplay's "A Sky Full Of Stars." Tears. This will never be easy to comprehend. Sigh. RIP, dear friend.

[10:32] Jennifer Lopez, revealing as much skin as possible in a dazzling silver dress, introduces Iggy Azalea and Rita Ora's "Black Widow." It's sinister, much like the eery musical underpinning. A web serves as the backdrop of the staging, and Iggy, the spider, of course. She's poisonous, she seems to stage as she saunters down stage. "This is the web that you weave."

Iggy=The only artist since The Beatles to have the No. 1 and No. 2 slot of the Hot 100 at the same time!

On another note, it's the year of collaborations!

[10:40] Demi Lovato (YES QUEEN) and Jason Derulo intro pop group Maroon 5 (one of pop music's most enduring artists) for a performance of "Maps." Set under a vibrant neon M, they perform under the setting sun outside for their fans. You can also count on M5 to perform well live, and this isn't an exception. No unnecessary frills or explosions, just talent.

[10:45] Jimmy Fallon, yes, really him. There's a Hug Cam segment. Now, the High Five Cam. Give The Person Next To You $5 Cam. What is this. Video of the Year..."Wrecking Ball" by Miley Cyrus! YASSSSSSSSS!

A young, dashing man takes the stage to accept the award. He's been homeless, invisible to everyone around him and represents a charity. "Thank you so much for your time," he concludes. Wow. That was emotional. A message of awareness that we all need to hear.

Dude. MC has done a complete 180 since last year.

Find out more about how you can give back on Miley's Facebook page.

[10:55] Now, it's time for Beyonce's Vanguard Award. Fans, via video submissions, reveal why and how the Queen B has changed their lives.

And the performance we've all been waiting for...BEYONCE!!! She's decked out in a gem-fused onesie, perched among dancers all dress in white and beige. The lights flicker. Bey moves down stage. The music kicks into high gear. Flames lick the backdrop. Dance moves and legs for days.

"MTV, welcome to my world," the sheer genius says, tossing her hair back 'n forth. Yup, this is a medley of her entire self-titled release from last year. Cinematic in its scope, pure perfection by definition.

[Now that I've wrapped my brain around THAT performance. She is, quite simply put, a master class. Sure, those shiny, glittery assess during "Drunk In Love" made me hot, but only she can pull it off. Her vocal and dance skills more than make up for it. Flawless. Bow down, bitches...until next time]

[11:12] Jay Z, with Blue Ivy in tow, takes the stage to hand Bey her Vanguard Award. "To the greatest living entertainer," he says. They kiss.

Beyonce gets super emotional. So deserved. Truly. (Also, you can hear an ear-splitting change of "BEYONCE" ripple through the crowd. Wow).

Here are the winners:

Video Of The Year

“Stay With Me,” Sam Smith

“All Of Me,” John Legend

“Do I Wanna Know?,” Arctic Monkeys

“She’s So Perfect,” 5 Seconds Of Summer

“Stay With Me,” Sam Smith

“Man Of The Year,” Schoolboy Q

Best Video With A Social Message

“The Walker,” Fitz & The Tantrums

“Turn Down For What,” DJ Snake & Lil Jon—WINNER!

“The Writing’s On The Wall,” Ok Go

“The Writing’s On The Wall,” Ok Go—WINNER!