New Kids on the Block Lyrics Analysis: "Remix (I Like The)," the Group's Deepest-Ever Track 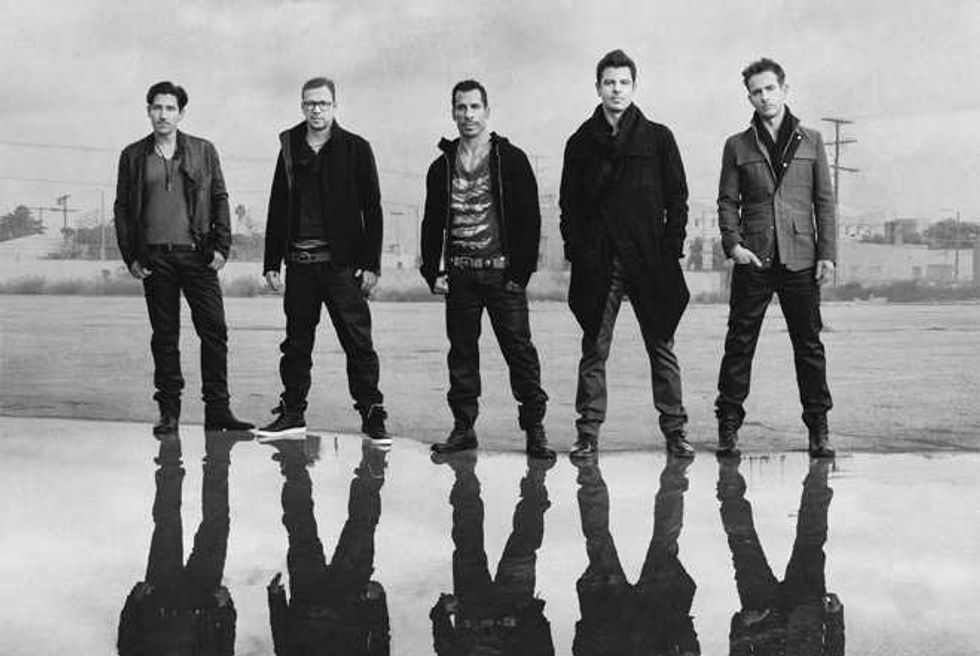 Almost by definition, boy bands don't age well. The older the groups get, the harder it is to recapture the magic of when they were at their prime, capturing the hearts of the country and helping define the sound of the era's popular music. The trick of how to stay relevant, contemporary or interesting as a boy band approaches middle age is one that countless such groups have struggled with over the years—and one which New Kids on the Block, one of the longest-running male vocal group phenoms still making music (and who released their new album 10 today), tackle in a rather clever way with their new single, "Remix (I Like The)."

The song's title, which also comprises the entirety of the songs hook, is one of the year's most intriguing you'll see in passing this year, posing far more questions about the song it represents than it answers. Is it a song about dance music appreciation? Is it supposed to be a remix of itself, with the "original" version still to come? Or is it just a remix of one of their older songs, with the parenthetical and the non-parenthetical parts of the title reversed? Even if you don't care about the song or about NKOTB themselves, you almost have to listen just to find out the answer.

And the answer, in the most literal sense, is that the song is actually an ode of appreciation to a ladyfriend of the New Kids, a former bookworm type ("She was that girl in the corner / Thick-rimmed glasses...ever the outcast") who has come out of her shell ("She went from wallpaper / To heartbreaker") much to the group's delight ("Went straight from a 2 / To an I just wanna own ya...baby I just wanna own ya.") The word "remix" is used in a way to imply a new-and-improved version, one that the New Kids prefer to the girl's original edit. (Basketball analyst Jalen Rose would undoubtedly approve.)

However, that straight reading is only one of the multiple meanings the "Remix" phrase takes on in the context of the new song. The use of the word "Remix" is also important in establishing a link between NKOTB to modern pop music. When last we heard from the New Kids (not counting their work in boy band supergroup NKOTBSB), with 2008 singles "Summertime" and "Single," they were mostly cut from an R&B/hip-hop-type mold, with that being the dominant form of music at the time. Remixes would not have been on the group's mind at all, unless they were the type where Ludacris shows up for a phoned-in guest verse.

But now that a more EDM-inspired sound has taken over as the music of the moment, the use of a word most closely associated with dance culture in their comeback single offers an implication that the group is down with the current trends. Ironically, while a couple of the songs on 10 are almost blatantly specific rip-offs of David Guetta hits, "Remix" mostly eschews the club sound for more of a live-band jam feel, minus some twinkly synths on the chorus. Nonetheless, the use of "Remix" in the title shows that the group is comfortable in the current pop milieu, at the very least.

But perhaps most importantly, the girl in the song isn't the only thing getting remixed—the New Kids show up in the song's video with a markedly different look as well. Not only do they dress rather differently now—in the "Summertime" video, they were still doing the undershirts-on-the-beach thing, but now they're all class, matching suits and ties and what not—but they perform with a faux full live band setup, clearly shooting for the pop-filtered classic soul sound and feel that Bruno Mars recently re-introduced as a viable Top 40 conceit. (They're not the only boy band attempting this style for their recent comeback, either: The Jonas Brothers just tried something very similar for their "Pom Poms" single/video.) Really, the New Kids are singing about liking the new version of themselves, and hoping we agree.

And for the record, we do agree. The multiple meanings of the song's title and chorus help give the song a wit that separates itself from the rest of the recent-pop genre exercises on 10, and the song's undeniable energy and hookiness helps carry it the rest of the way. It might be too late for the New Kids to be re-established on the mainstream level of a One Direction or The Wanted, and the song might never get as popular as "Locked Out of Heaven," but if this is the Remix for the New Kids, we're looking forward to the 12" Edit and the Instrumental Dub version as well.