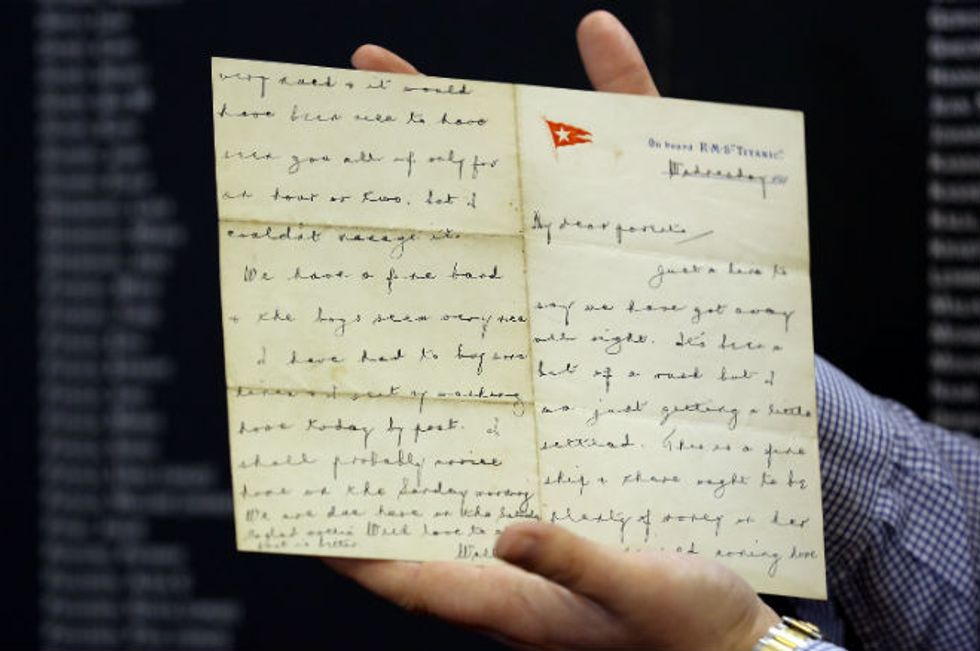 New letters that appear to be a first-person account of the sinking of the Titanic have been discovered.

Dated 1955, the letters were written in French by a woman named Rose Amélie Icard and translated after being posted to Reddit. Rose was the traveling companion of an American by the name of Mrs George Stone; both were rescued on the lifeboats.

"Towards eleven o'clock Mrs. Stone and I went to bed. Three quarters of an hour later, as the liner was cruising at full speed, a terrifying shock threw us out of bed..."

Rose goes on to describe what happened on deck as people were being loaded into the lifeboats:

"At this moment we witnessed unforgettable scenes where horror mixed with the most sublime heroism. Women, still in evening gowns, some just out of bed, barely clothed, disheveled, distraught, scrambled for the boats. Near me were two handsome elderly [people], Mr. and Mrs. Straus, proprietors of the great store Macy's of New York. She refused to go into the boat after having helped in her maid. She put her arms around the neck of her husband, telling him: 'We have been married 50 years, we have never left each other, I want to die with you.'"

She also recounts the moments after the ship disappeared forever into the Atlantic:

"Suddenly, there was darkness, whole and inscrutable, shouts, horrible yells, rose in the middle of the creaks of the boat, then that was it. Sometimes, 43 years after the tragedy, I still dream about it. From the 2,229 passengers and crew, only 745 were saved."

Here is the link to the full translation by Reddit user frenchlitgeek.