One Direction Even More Adorable When Holding Puppies 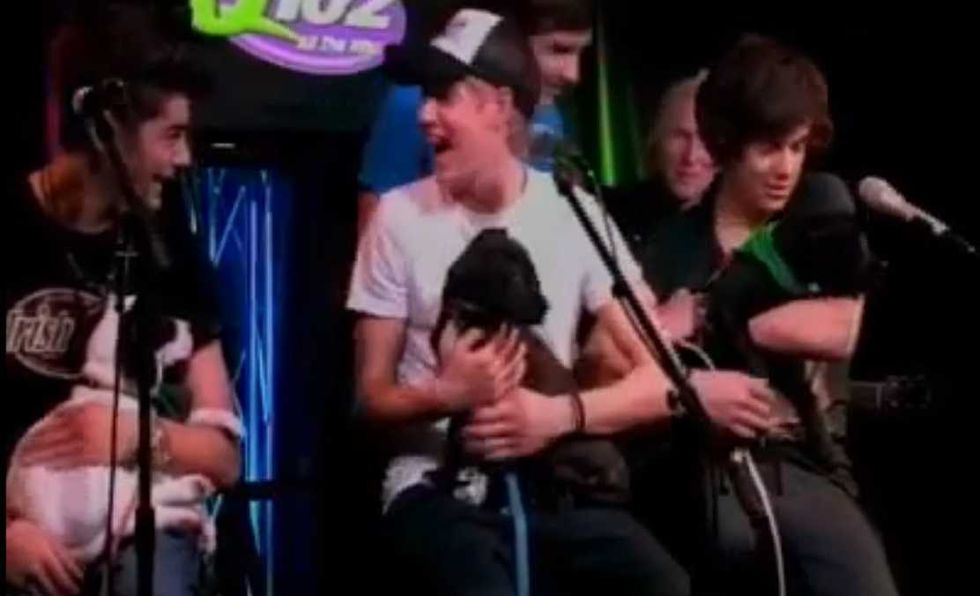 As the merits of One Direction members continues to be dissected and examined by fervent fans who each have their own favorites, throwing in an outside factor could throw off the group's equilibrium entirely. Sample question: If Liam is cuter than Niall, what happens when Niall is cooing into the ears of an adorable puppy? Continuing their tour of the U.S. in support of soon-to-be number one album in the country Up All Night, 1D sat down for an interview and acoustic set with Philadelphia radio station Q102 on Saturday. But in order to separate their station's interview from all the rest, and ensure that their YouTube clips would soar above the countless others that have captured Harry tossing his hair and the rest of 1D expressing just how very thankful they are to all those who have bought their album, DJ Maxwell came prepared with a stunt: "How can we make sure the most awesome boy band on the planet has the most awesome video? And I said, 'Let's add puppies!'" You are correct, sir. If the meme ain't broke, don't fix it.

Sure the boys sang a soulful version of "More Than This" and talked about their plans for celebrating St. Patrick's Day (Erin Go Bragh, Horan family) but what you really want to stick around for is the sight of five teenage heartthrobs melting in the presence of tiny animals. Starting today, Liam's "I love puppies" should be your ring tone. Beginning around 7:15, Niall, Harry and Zayn (the dog whisperer) get to spend quality time with visiting friends from Delaware County SPCA before attempting the task of singing on key and holding an in uncooperative pet in their laps. Can we get Niall some new pants, please? Watch below.