"Paparazzi" at the '09 VMAs: The Night That Stefani Went Gaga 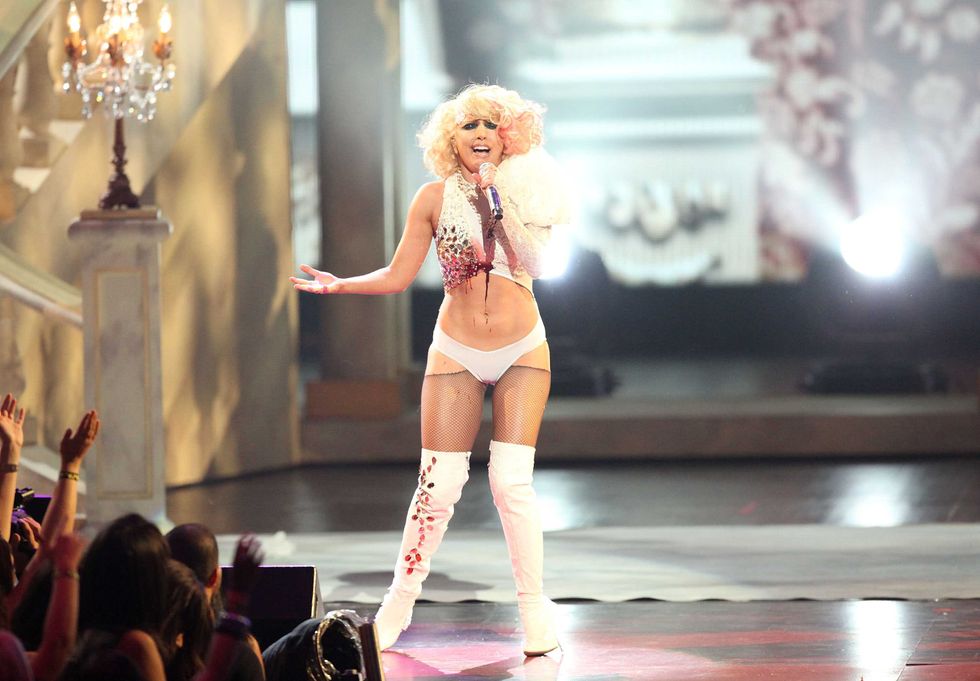 With the possible exception of Kanye West-- who will also be performing at this year's ceremonies--nobody has done more to keep the VMAs interesting over the last half-decade as Lady Gaga. It was on MTV's biggest night that Gaga debuted her soon-to-be-legendary meat dress, where she accepted a Best New Artist award with the phrase "It's for God, and the gays," where she announced her second album Born This Way, where she made her insufferable male greaser alternate identity Jo Calderone public, and where (as Jo) she made creepy advances towards Britney Spears that made for a couple of the most uncomfortable moments in the show's history. She's the biggest wild card the evening has to offer, and though she's just as likely to irritate or confuse as to awe and delight, you have to tune in just to see the crazy crap she does.

We didn't know that back in 2009, however. Before Lady Gaga's first VMAs--where she was nominated in most major categories, and ending up winning three, including the previously mentioned Best New Artist for "Poker Face"--she mostly seemed like a normal pop star, maybe a little off-kilter, but not totally off the grid. What we knew about Gaga at that point was mostly from her first two singles, the chart-topping "Just Dance" and "Poker Face," which were fairly typical dance-pop--"Dance" could've very easily been a hit for Cascada, while "Poker" was sort of a proto-Ke$ha jam, down to its sexual ambiguity and pseudo-rap bridge. They were more catchy and flirty than they were outre, and when Gaga's third single "LoveGame" arrived with an electro thump and a super-obvious "disco stick" euphemism hook, it seemed like Gaga's pop mold was mostly that of the pro-decadence club seductress, a grimier version of early Madonna.

Then came "Paparazzi," the song Gaga would perform in her VMA debut. "Paparazzi" was unlike Gaga's other singles--less straightforwardly catchy, with more abstract lyrics, and a sort of meta-fascination with celebrity that suggested a level of self-awareness not immediately apparent in her previous hits. It was still obviously Gaga, but it was a little bit...well, weird. And the song was nothing compared to the video, where Gaga's art-house inclinations first really came to light. A seven-minute clip directed by Swedish auteur Jonas Akerlund and featuring True Blood heatthrob Alexander Skarsgard, the video featured Gaga in a foreign-language murder revenge story (with an Old Hollywood feel), with breaks for Gaga to feature in dance numbers in a wheelchair and on crutches, and for her to have couch makeout sessions with androgynous hair-metalers. It was bizarre and a little bit disturbing, but it was undeniably compelling, and it made clear that Gaga had artistic aspirations beyond disco sticks and muffin-bluffin'.

Still, it was no preparation for the VMA performance to follow. The gig starts off innocuously enough, with Gaga teasing a few bars of biggest hit "Poker Face," before launching into new single "Paparazzi," performed in a mansion set reminiscent of the video, with Gaga and her dancers draped in all-white. It's typical big-budget performance stuff for the most part, though even at that point, it feels a little off--Gaga's dancers are dressed in tatters, with one of them seeming to be wearing torn panties as a surgeon's mask, and Gaga herself is wearing a weird bunny headdress and underwear combination that makes her look like she's going to an Eyes Wide Shut sex party for furries. The state of undress was nothing new for Gaga, who never seemed to wear much in her videos, but there was a sense of glamor to her previous brushes with half-nudity that was decidedly absent here, with her poofy hair, thick eye makeup and jerky dance moves.

Things get much weirder from there, of course. Wheelchairs and crutches are brought out, as in the video, and Gaga's dance moves get more and more aggressive, her singing angrier and more desperate. After the bridge, Gaga plops down at a piano bench, with her left leg draped on the keys, and starts pounding away at it like a member of Dr. Teeth and the Electric Mayhem, her mess of blonde, discolored hair banging up and down. And then shit gets really real, as she gets up from the bench to reveal a bleeding wound in her chest, as her singing of the song's final chorus devolves into a pained sob, and Gaga rallies just long enough to be strung up by her dancers and hung from the ceiling, resulting in that final haunting image of a dead-eyed, bloody Gaga spinning in mid-air on the MTV stage.

This was not expected, to say the least. I remember being slightly shellshocked by the performance at the time, wondering aloud "This is the person we've elected as the next big pop star?" It seemed unreal that the singer who I had basically written off as a fun, harmless one-hit wonder at the time of "Just Dance" was suddenly doing this level of performance art on one of music's biggest stages, in what was essentially her first high-profile gig as a pop star. It seemed like an incredible risk, and I wondered if this was going to snap America back to reality with Lady Gaga and essentially mark the end of her career as a world-dominating pop power and move her back to the art underground, where she'd maybe be more comfortable anyway. (From the audible gasps in the crowd at the end of her performance, and the classic reaction shot of an absolutely stunned Diddy halfway through the performance, it seemed likely that America just wasn't ready for Gaga Unelashed.)

I was very wrong. First off, Gaga's performance was totally overshadowed that night by a number of things--in the ceremonies that we ranked last year as the greatest VMAs ever--but mostly by Kanye's interruption of Taylor Swift's Best Female Video award acceptance in the name of loser Beyonce having one of the greatest videos of all-time, which instantly became the biggest water cooler moment in the awards' history. Gaga's insane performance--as well as the bizarre face-covering red dress she wore to accept her Best New Artist trophy (resulting in another classic WTF? reaction shot from presenter Eminem)--was at best the second-biggest headline from the night, and it also had to compete with an emotional MJ tribute, memorable Taylor and Beyonce performances, and the closing debut performance of Jay-Z and Alicia Keys' "Empire State of Mind" (complete with Lil Mama stage-rushing!), soon to become the biggest hit of the year.

But more importantly, it also turned out that the American people weren't turned off by Gaga at her Gaga-est. Indeed, as the monster mega-hit "Bad Romance" would prove a year later, with its arty space-age music video and self-referential main hook, Gaga's fans seemed to love her more the weirder she got. As the mythology around her videos and her performances grew, so did her extreme popularity, and by the time she showed up at the next year's VMAs in that headline-grabbing meat dress, she was inarguably the world's biggest pop star, cleaning up at the awards with eight wins, including Video of the Year. "Paparazzi" at the '09 VMAs wasn't the end for Gaga, it was just the beginning.

Of course, Gaga may have hit a tipping point with her artier inclinations, as her Born This Way album performed somewhat underwhelmingly, and Gaga's exhaustive promotion of the album seemed to result in diminishing returns for the album's singles, to the point where fifth single "Marry the Night" (with an accompanying ten-minute mini-movie of a music video) came and went with barely anyone even noticing. Her most recent VMA appearance--the Jo Calderone one in '11--received the most mixed response of her appearances to date, with many saluting her fine show-opening performance of then-current single "You and I," but blanching at her insistence to spend the whole night in the grating Calderone persona, overstaying her/his welcome on several occasions. Gaga wisely skipped the '12 VMAs altogether, perhaps feeling that the show could use a break from her overwhelming presence--though it might not be a coincidence that last year's awards ended up being one of the most dull, uneventful VMAs of the century.

This year, Gaga will be back to open once more, performing her fine (although somewhat commercially underperforming) single "Applause" for the first time live. We have no idea what to expect from the performance, and we have no idea how it will be received, now that Gaga is firmly past the Can Do No Wrong stage of her career. But at the very least, we know it won't be boring, and that all goes back to that "Paparazzi" performance four years ago, where Gaga first showed her hand (and a whole lot more) as an art-pop provocateur, and set her career (and arguably that of pop music entire) on a whole new course as a result.