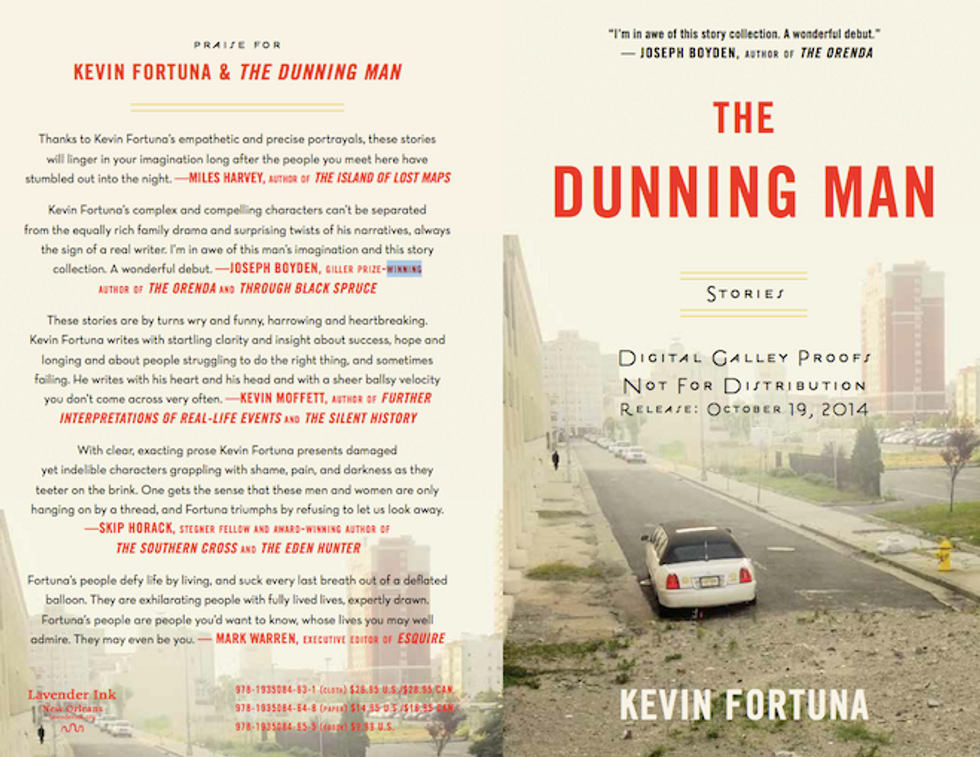 If Stephen King, Jhumpa Lahiri and Haruki Murakami had a brainchild, it might look a little something like The Dunning Man.

Kevin Fortuna’s debut collection of short stories is the literary equivalent of a slow burn – you start reading and before you know it, three hours have passed in an almost trance-like state.

This is thanks to Fortuna’s taut yet highly poetic prose, with a merciless spotlight placed on the very darkest recesses of human nature. By turns heartbreaking and uplifting, Fortuna has created characters so real it almost feels voyeuristic to watch as they live their lives and tell their stories.

But it’s not all doom and gloom - the beauty in Fortuna’s storytelling is the way in which even the most harrowing tale is told with great humor and a certain sly sense of delight (“I told him to calm down and call me back when he’d hired a translator”).

In “Poor Jimmy”, what appears to be a story about two friends drinking and chasing girls turns into something surprisingly warm and moving, while not omitting an ounce of the edge that characterizes Fortuna’s people.

Descriptions are often startlingly beautiful – “Her red-brown hair hangs over the deep, scabbed-up gap on her cheek, almost covering it like a picture over a long crack in a wall.”

Another wonderful skill that Fortuna has is causing us to root for people who we do not want to root for, like the black sheep in “Sullapalooza”.

Stories do not always end neatly. Sometimes, as in “Flogging Maggie”, it feels as if the reader is being yanked out far too early and downright unfairly. This effect is testament to the theme running through this collection of intense, almost uncomfortable realism mixed with an almost fantasy-like world - an alternate universe where just about anything can happen and nothing is what it seems.

This is really brought to life in the title story “The Dunning Man,” which is arguably the best in the book. An ordinary man is thrown into an increasingly bizarre situation including celebrities, circus folk, tigers, and crazy Chechens. What could be an over-the-top tale in a lesser writer’s hands becomes a wonderfully tense and funny story that never spirals out of control and ends the collection with a bang.

Deceptively simple and restrained, this is not literature for people who like to have everything spelled out for them, or clearly defined villains and heroes. This is storytelling in the Grimm fashion, where you, the reader, get to decide how you feel about the characters as they handle their individual situations. There is no closure as you’d expect there to be, and is all the more potent for it.

Instead, what emerges is a fresh, sharp, harrowing, and frequently hilarious style reminiscent of the dark humor of Shaw. This book will stay with you long after it’s finished, swirling around in the conscious and raising new thoughts and questions.

The official release date of The Dunning Man is just a few days away (October 19th) and the publisher is having a preorder special. You can Follow this link to Amazon to snag a copy at the reduced preorder price.