LCD Soundsystem and A Tribe Called Quest hit the festivals

The last time the festival had been this packed, I was told, was the last time LCD Soundsystem headlined it. There was also objectively less space, following the lead of most music festivals, this one had gone the route of segregating vast chasms of the grounds for a higher tier of ticket-payers, lending a subtext to every festival traffic jam misery: you are not rich enough. This was fitting, LCD Soundsystem was a band of immaculate paid-for privilege, for whom life in New York remains a romantic myth, where things happen. Strangely, I was in Chicago but when the time came for the torch song for Ed Koch's era of garbage strikes, a backdrop of the city mysterious appeared, like in the poster for Sleepless in Seattle.

The highlight of their set, which in their own words will be the "same shit" throughout the world-crossing itineration, was the one I hadn't heard when I saw them last, during the second or third of the band's New York residency's:

It's my anthem in between girlfriends, belted to myself while running from one bedside to another in the steamy New York night. James Murphy, the band's aged and earnest key man, once celebrated by Sasha Frere-Jones for playing "a cowbell as if he's dreamed since boyhood of being the world's best cowbell player," is a far more entertaining performer playing the single music festival date than on his fifth night in a row in Brooklyn, a feat he's rather keen on. Then, in the grim cavern of Brooklyn's slowly gentrifying Greenpoint, you could feel the band barely able to keep the gearing grinding while James gave limp monologues about how parents won't understand your decision to dedicate your life to music. Less beleaguered, the rest of his live band gave his brand of earnest bass riffs its gleaming thrill, like watching machines plod, tires rolling, Nascar for the Williamsburg crowd. There's Nancy Whang, who's the chilliest motherfucker you're ever going to find in a plush turquoise one-piece, pressing buttons next to Hot Chip's Al Doyle, reminding us that he's British and gets better health care than us. Behind them, Gavin Russom rocked out blissfully in a purple headscarf and oblong fortune-teller earrings, the show was her first with LCD since coming out as trans a few days before. 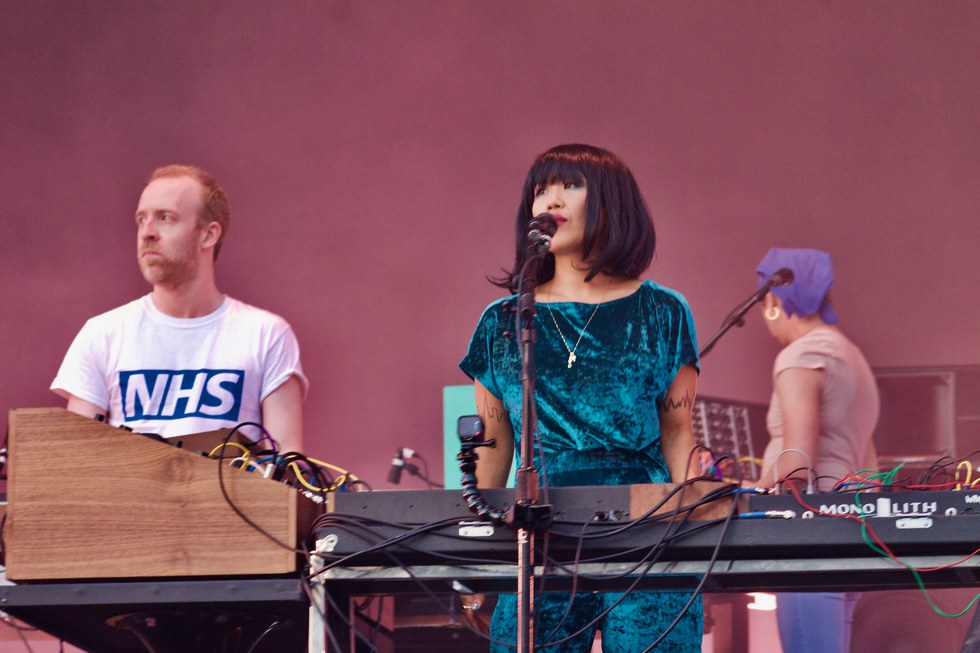 The boys were back in town (l-r: Al Doyle, Nancy Whang and Gavin Russom) 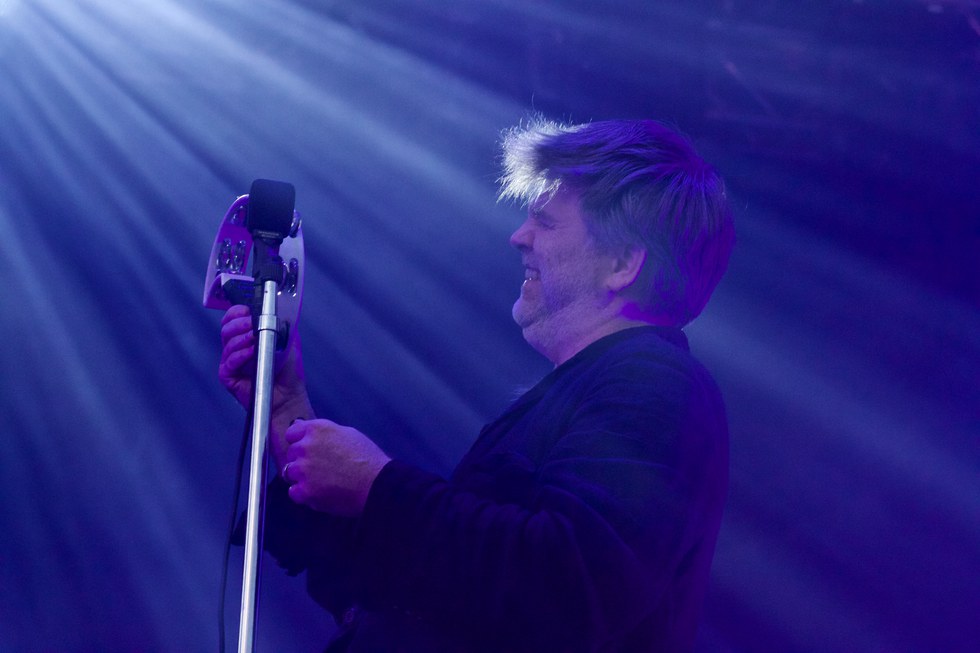 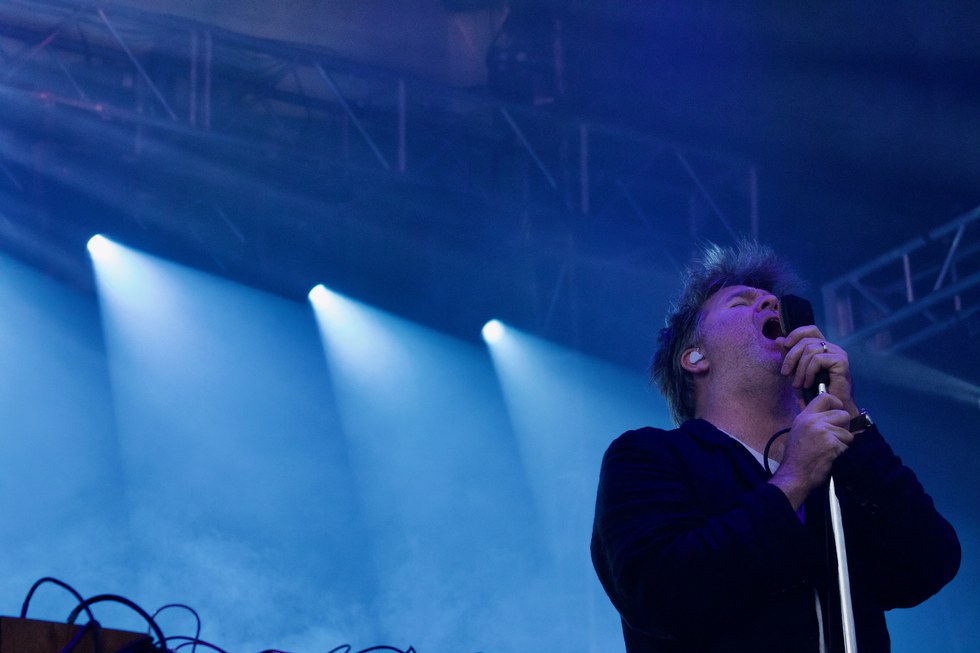 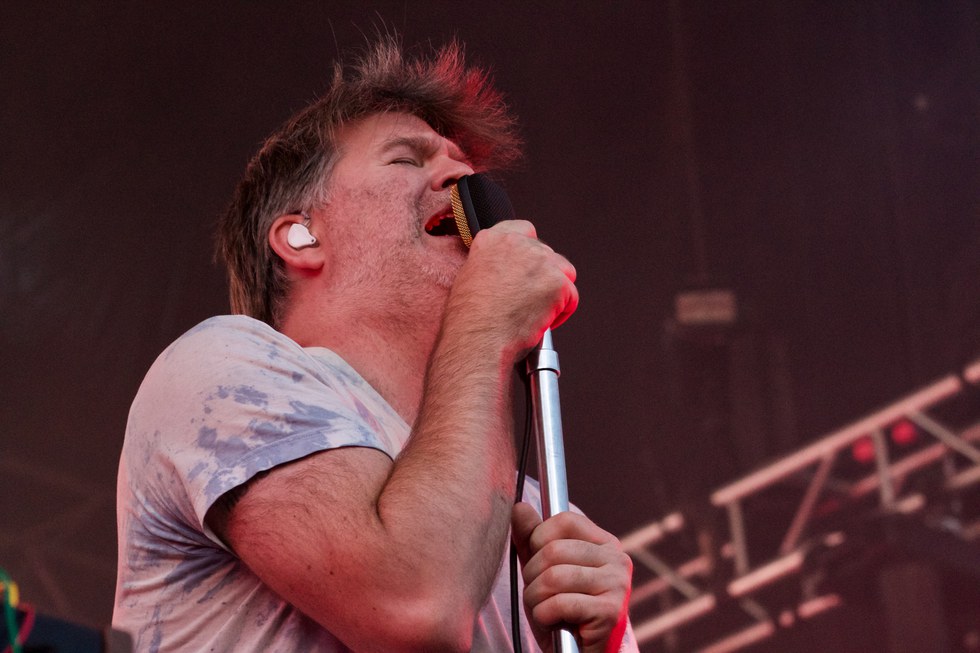 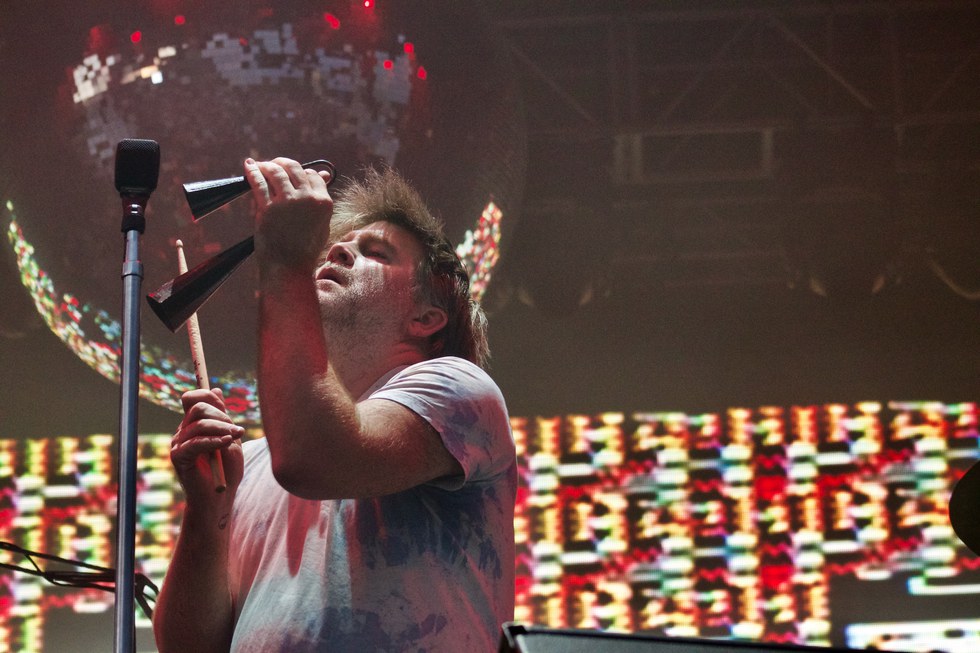 The next day, the Queens crew that was A Tribe Called Quest took to the main stage. Expectations were high. Even Ice-T had come all the way to chi-town to see this, waving to the audience while chilling on stage. Few reunion tours short of John and Paul getting it around to getting it together in the '70s, were looked forward to with as much fervor as A Tribe Called Quest's latest run. While a number of their Native Tongues peers, namely Del La Soul, have been spinning more new material than Damon Albarn knows what to do with, ATCQ have largely kept it confined to last year's We Got It from Here... Thank You 4 Your Service, which just so happened to be one of the best hip hop albums of the past few years.

Which is probably why few eyes rolled when Q-Tip grooved onto stage and, after a savvy dig at LCD Soundsystem, hit it with the opening track off We Got It from Here.... Like James Murphy's crew, however, ATCQ lacked the ubiquitous hit that would draw in fairweather fans, there's was a career without a "Hey Ya!" or a "Wonderwall" that would get your average '90s guy on the street rolling. Instead, there's was a vicarious fame: beloved and namechecked to death by the Kanye generation, 'Ye himself collaborated extensively with both Q-Tip and Consequence, the latter of whom performed a version of "Spaceship" midway through the show, a The College Dropout deep cut that he was featured on. 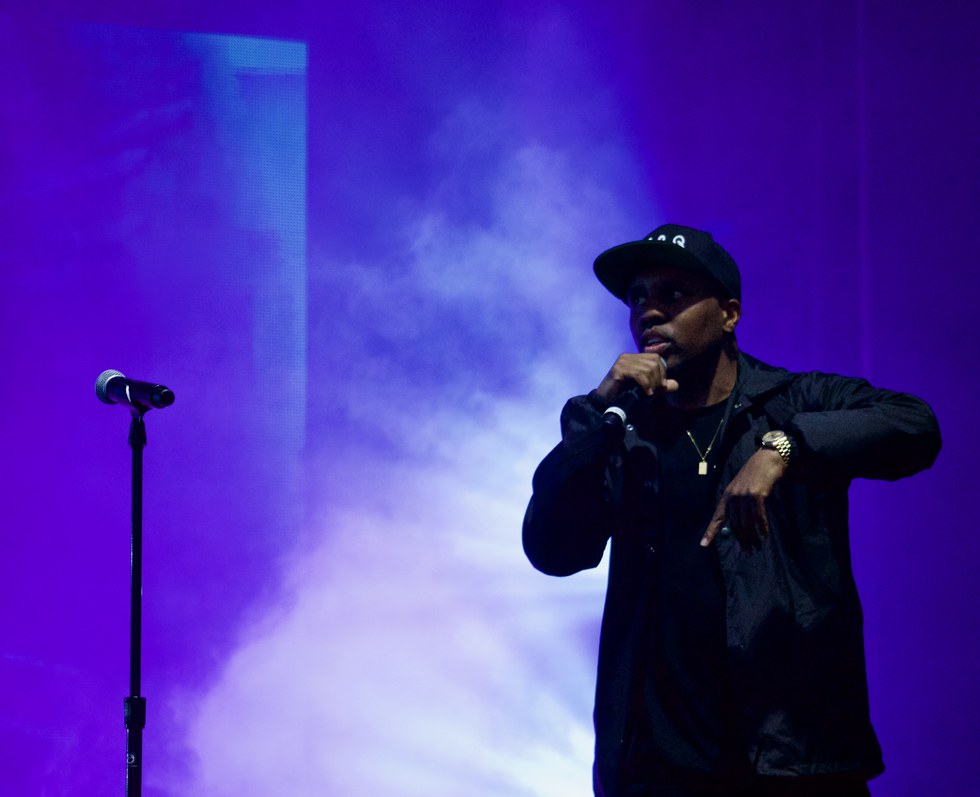 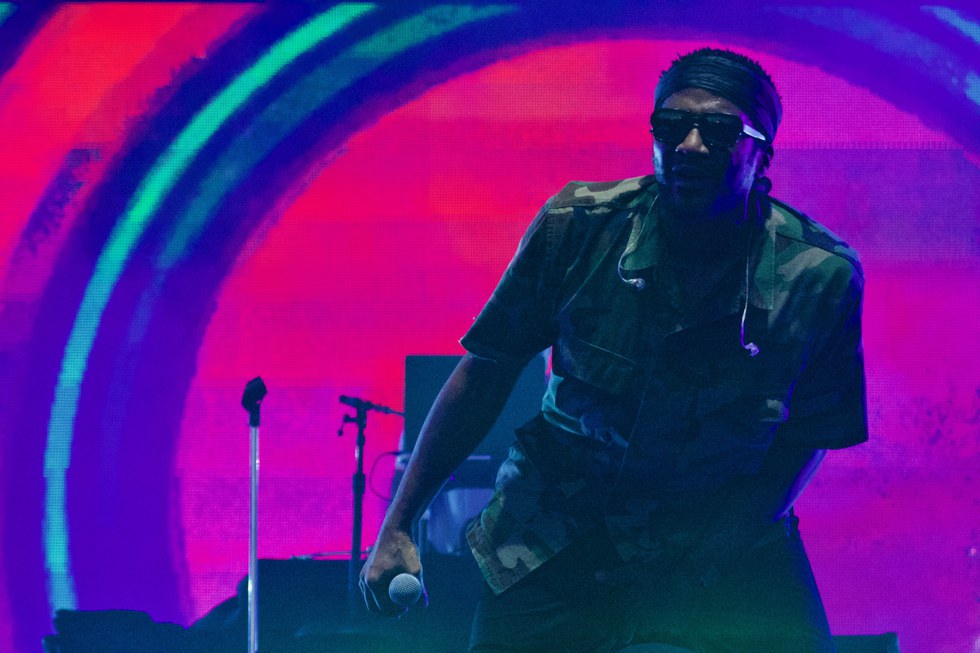 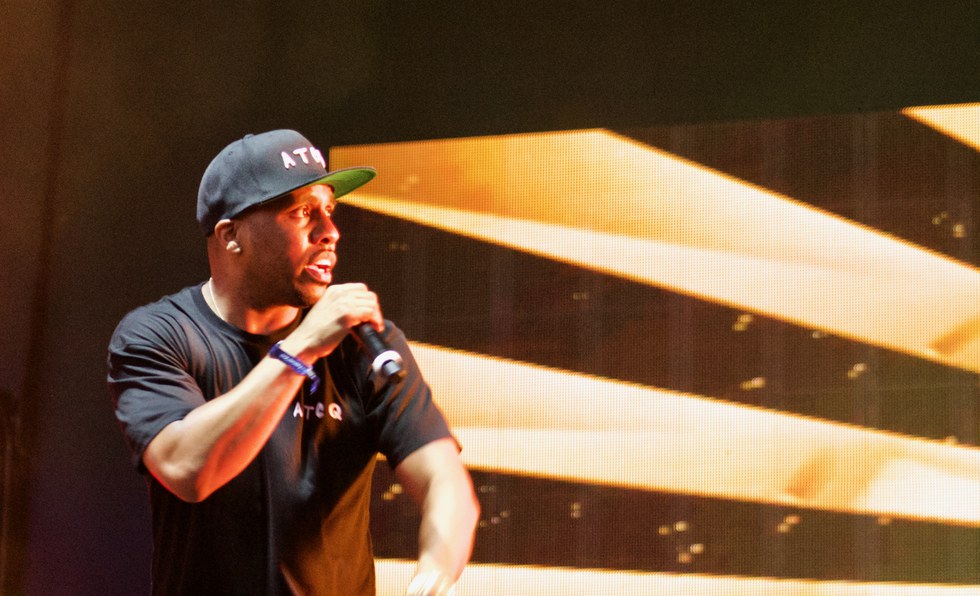 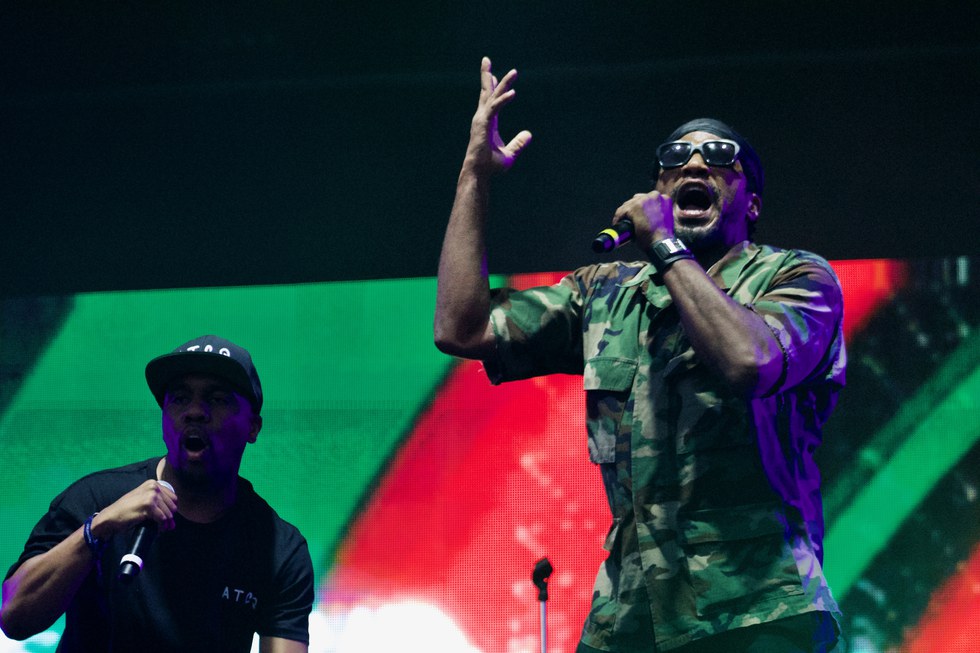 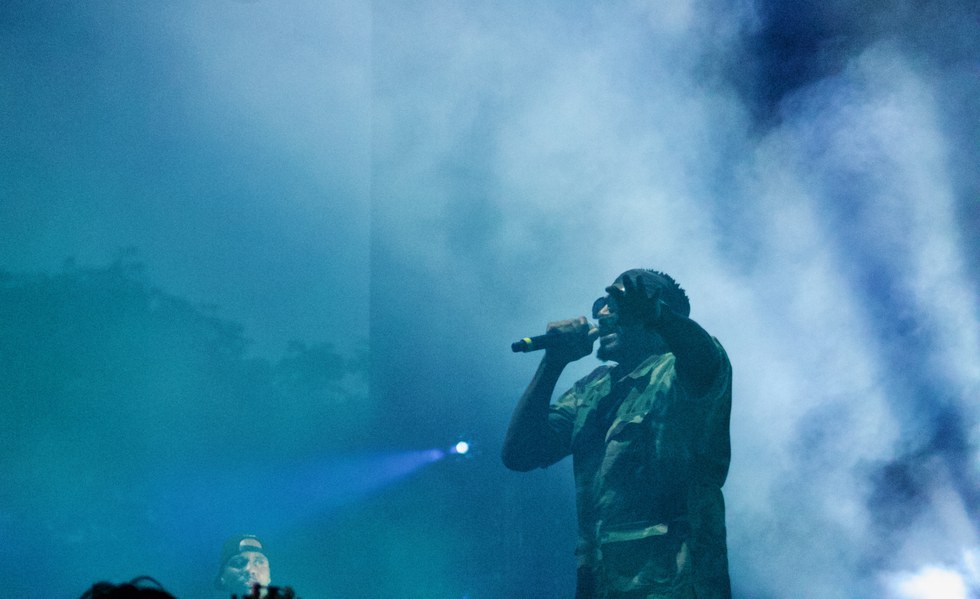 But big-name celebrity didn't hang over the show as much as absence: Phife Dawg, one of the group's core MCs, had passed away shortly after the recording what the group has said will be their final record. An empty mike was placed in the center of the stage in his honor and, at times, it felt like Q-Tip, Consequence and Ali Shaheed Muhammad were targeting their bars at this omnipresent blank space, filled with memory. An experience that made ATCQ's run feel less nostalgic than spiritual, a final run of the best material they have before respectfully calling it quits. No phony rappers.

Andrew Karpan is not the editor-in -chief of Popdust and producer of Popdust Represets, a program that's all about keeping in real behind the screen. He is also a music producer, bassist for Wazz Up (instrumental hip hop independent rock) & cellist for Bad Tea (indie rap) and front-man for The Real Team (his basement). Please follow him, someone.

LIVE | Pitchfork Music Festival was all about loving the femme

INTERVIEW | Catching up with The Feelies: "It's not a particularly joyous time to be alive."

Skepta & Stormzy: scenes from the grime takeover of hip hop