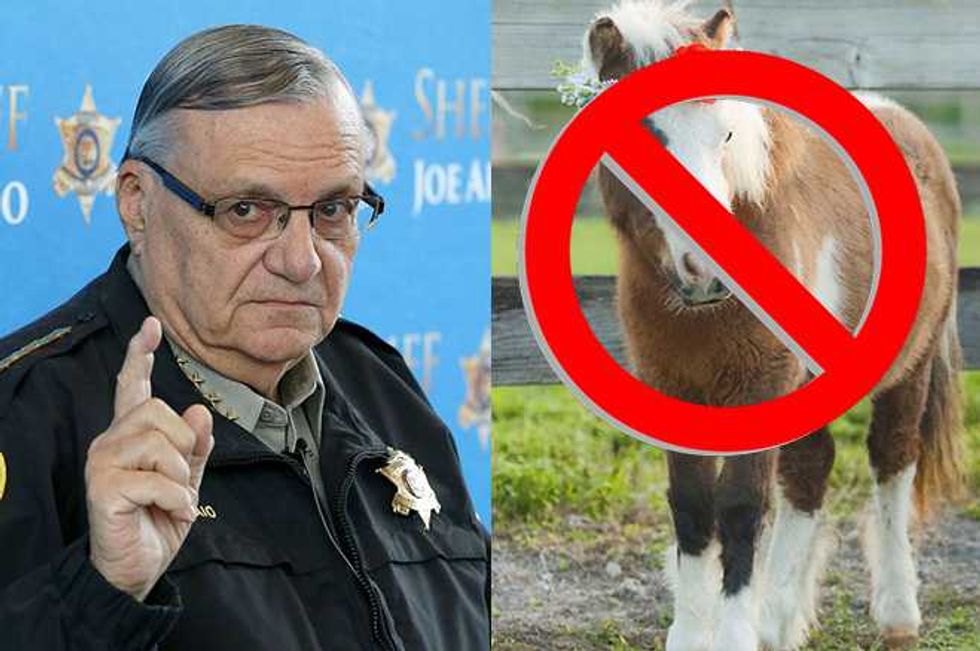 Arizona's notorious, proudly racist Sheriff Joe Arpaio has turned his attention from immigrants to the scourge of bestiality, which is tearing at the very fabric of our society.

Just kidding about the scourge part. Sheriff Joe is one of those crazy right-wing fascist types who worry about people having fun in ways the bible frowns upon.

He's so preoccupied with bestiality that you might get the side-eye from Sheriff Joe for petting your dog more than he sees fit.

Like the John Birch Society who saw Commies hiding under every bed, Sheriff Joe sees zoophilia as a national crisis that deserves top priority, and he wants to put you horse-courting perverts on notice.

Sheriff Joe has mounted his campaign, coincidentally, as he seeks reelection in Maricopa County. And if he reminds you of Donald Trump in his shameless hucksterism, he will be glad to point out how similar they are. Speaking about his endorsement of Trump, Arpaio noted,

You can't argue that he doesn't know which way anything goes.

Earlier this year, he was rebuked by a US district court for ignoring orders to stop arresting people simply on suspicion of illegal immigration. And in his wacky autobiography, he boasts about turning his 'Tent City' prisons into concentration camps.

If only Sheriff Joe were a harmless laughing stock, created just for our amusement!

Unfortunately for the small block of American citizens whose base is excited by sanity, the 83 year old windbag has many thousands of a ardent admirers.

Responses to his video on Facebook are almost beyond belief in their mouth-breathing cretinous support of his bestiality crusade.

Here are a sampling, with blacked-out identities to protect the 'innocent'.

Okay, brace yourselves, Popdust readers. Watch the video and see Sheriff Joe make the case in his own words.