Remember the Powerpuff Girls Episode That Set Records for Beatles References Per Minute? 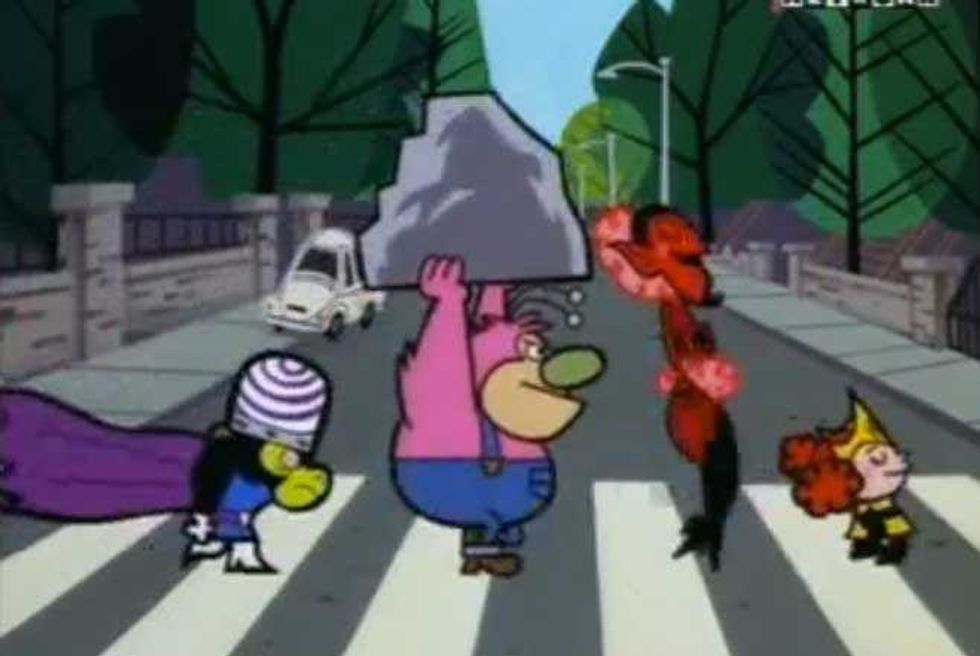 Hey, The Powerpuff Girls is (are?) coming back. The news may or may not be exciting for fans of the super-popular late-'90s cartoon, since io9 reports that the return will not be a simple series revival, but a one-off special that will not involve creator Craig McCracken and will feature a very different look. But at the very least, Beatles drummer Ringo Starr will be involved, playing a "flamboyant mathematician" named Fibonacci Sequins (which is really just a great name for a flamboyant mathematician) and singing an original composition, entitled "I Wish I Was A Powerpuff Girl."

The Beatles/Powerpuff connection got us thinking back to maybe our all-time favorite Powerpuff Girls episode, and a watershed moment in pop/cartoon crossover, the Season Three finale, "Meat the Beat-Alls." The episode featured a gang of the show's most dastardly recurring villains—including the Girls' primary nemesis, evil genius ape Mojo Jojo, and one of the creepiest villains in cartoon history, the devil/crab/ballerina hybrid named Him—teaming up in a "rock" supergroup (member Fuzzy Lumpkins used a gigantic boulder as his weapon of choice) to defeat the Girls, calling themselves the "Beat-Alls." The group's formation would serve as a jumping-off point for 15 minutes of non-stop Beatles references, guaranteed to tickle Beatlemaniacs pink.

Amazingly, "Meet the Beat-Alls" wasn't even the first episode of a hit cartoon show whose primary purpose was longform Beatles parody. The 1993 Simpsons episode "Homer's Barbershop Quartet," in which Homer formed a Fab Four of his own with the barbershop group The Be Sharps, also went heavy on the John, Paul, George and Ringo, down to Bart asking Homer if he ever made the Beatles' mistake of saying the group was bigger than Jesus. ("All the time. It was the name of our second album!")

But even "Quartet" was left in the dust by the supersonic speed of "Beat-Alls." The ep's Wikipedia listing cites "about 65 songs and events" from the Beatles' history being referenced throughout the episode, and one particularly devout Beatles fan runs down all 65 (with timestamps!) here. That would be impressive for a 15-minute episode—a rate of a little less than five a minute—but becomes doubly so when you consider that the episode doesn't even get going with the references until over five-and-a-half minutes in, and really only covers a nine-minute timespan, for a rate of over seven Beatles references a minute, or roughly one every eight and a half seconds. That's...a lot of Beatles references.

And what's more, most of the references are pretty chuckle-worthy. Sure, some of them are a little forced, like a brand new character being named Sgt. Pepper, or Mojo holding up a bank saying "I want to hold your cash!," but for the most part, the creativity is there, like when Mojo and his Yoko-esque performance artist girlfriend Moko hold a "Bed-In" in the middle of a crowded street, or when the Girls' father/creator Professor Utonium introduces an article in the paper about the Beat-Alls with the "Day in the Life"-quoting "I read the news today...Oh, boy!" And the sheer rush of the references coming one after another after another beats you into a near-delirium, leaving you powerless to resist them, corny or no.

Will there be any Beat-Alls references in the upcoming special? If Ringo has any respect for the incredible tribute to his group's enduring legacy three decades after their breakup, we'd certainly hope so.