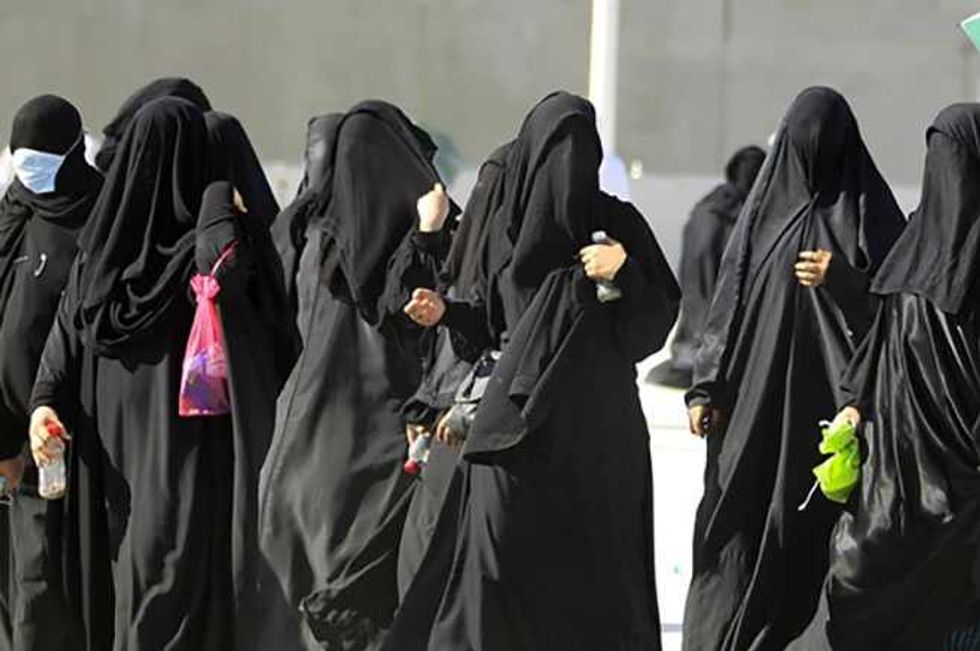 Saudi Arabia has sent an all-male team to compete in the 2014 Asia Games, which kick off next week in South Korea.

The notoriously repressive Kingdom explained away its decision with the claim that women are just not “competitive enough".

Out of the 45 countries competing in the games—whose slogan is “Diversity Shines Here”—Saudi is the only one to not include athletes of both genders in its team. Not surprisingly, human rights groups have slammed the Arab state for its latest example of ongoing misogyny.

Human Rights Watch Director of Global Initiatives, Minky Worden, condemned the move, saying it is a step backward for Saudi Arabia, and admonished them for “shutting the door” on female athletes.

It follows hot on the heels of Saudi’s decision last month to not select any female athletes to compete at the Youth Olympics in China, despite have done so four years previously—where, flying in the face of their “not competitive” enough reasoning, Dalma Rushi Malhas won a bronze medal in the show jumping category.

It’s just another slap in the face for Saudi women, who, despite the Kingdom’s claim that in their culture, they “have their integrity and a special life” continue to be subjected to ongoing, unbelievable, levels of repression.

Popdust has compiled a list of restrictions that are enforced on women—who make up for 60% of all university graduates, yet only 18.6% of the workplace.

Cannot leave the country, or travel freely inside Saudi, without the permission of a male guardian or husband

Cannot wear anything they want in public (Duh!)

Women must abide by Saudi’s strict clothing rules that are rigorously enforced by the Muttawa (Promotion of Virtue and Prevention of Vice department… AKA the religious Fashion Police.) Women must wear conservative and loose-fitting clothes when outside of their home, including a full-length cloak (abaya) a niqab (face veil, that allows only the eyes to be visible) and a hijab (head covering).

Cannot go anywhere in public without a male chaperone, who is related in some way, or approved of by a male guardian or husband

But, hey, guess what? Its actually NOT about repression, it’s actually for the woman’s own good! Because, in Saudi culture, allowing females to have any freedom of movement would make them “vulnerable to sins.” And, if a woman does dare to wander freely on her own, or with a man that is not a relative, she better beware—one teen learned that lesson the hard way after she and a male companion were kidnapped and she was gang raped by seven men. The victim, known as "the Girl of Qatif”, was sentenced to six months in jail and 90 lashes for “being alone with a man that is not a relative.”

Cannot try on clothes while shopping

Saudi stores rarely even have fitting rooms—given the fact that over 80% of women do not work, not surprisingly, the vast majority of retail workers are male. And it seems even the mere THOUGHT of a strange woman undressing in a room nearby would just be too much for these hot blooded men to handle.

In order to open a bank account, a Saudi woman must be accompanied by her male guardian or husband, who also has to sign the papers on her behalf—a restriction made all the more ridiculous by the publication of a recent study, which claims the majority of family-run businesses in Saudi are owned by women. The report finds there are approximately 20,000 companies owned by women, ranging from retail to travel related businesses.

Cannot enter a restaurant without a male guardian or husband

Saudi eateries are strictly segregated, comprising of a “bachelor” room for men, and a “family” room for women, children and their husbands/male guardians—and, It probably comes a surprise to nobody, that the family room is usually of much lower quality and standards than that of the bachelor room. Women are also barred from waitressing at restaurants, aside from a small number of “women only” places.

And, if they do, oh boy, they will learn never to do so again. Case in point, back in 2008, a 75-year-old woman made the grave mistake of allowing a delivery man to bring some bread into her home. Her punishment? Imprisonment and 40 lashes.

Once again, this has nothing to do with repression..no, no, no! It’s for the woman’s own good! Despite there actually being no official law that bans female driving, religious beliefs prohibit it, with clerics arguing female drivers “undermine social values.” Oh, but that’s just the tip of the misogynistic iceberg—last year, after a number of brave women took to the roads to protest against the driving ban, one wise old fella named Sheikh Saleh al-Lohaidan, admonished them for their recklessness, claiming women drivers risk damaging their ovaries and subsequently giving birth to children with defects.

“If a woman drives a car, not out of pure necessity, that could have negative physiological impacts as functional and physiological medical studies show that it automatically affects the ovaries and pushes the pelvis upwards," he told the news website Sabq.org. "That is why we find those who regularly drive have children with clinical problems of varying degrees."

Adding further to the ridiculousness, many clerics also object to women being driven around by anyone who is not a direct relative. A fatwa was issued by the Royal Court and Ministry of Justice back in 2010, suggesting females should be made to give their breast milk to their employed drivers to drink, which would (bizarrely) then make them relatives and therefore trusted to be alone with them.

Not surprisingly, the majority of the restricted medical procedures encompass those that are of a sexual nature, but can also include routine, or life saving surgery. In 2013, a hospital postponed the amputation of a critically injured woman’s hand as there was no male legal guardian to give permission for the procedure—her husband had just died in the same car accident that had caused her injuries.

Women are prohibited from entering cemeteries, even in the company of a male guardian—so are never able to attend burials, even if it is that of a child, parent or spouse. They’re also not allowed to visit the gravesite ever to pay their respects at a later date (although, in fairness, that’s actually a practice that’s not common in Saudi anyway, even for men)

Cannot buy or own a Barbie doll

The good old Muttawa banned the popular kids doll from Saudi Arabia back in 2003, claiming the “Jewish toy” presents a threat to morality and is offensive to Islam.

"Jewish Barbie dolls, with their revealing clothes and shameful postures, accessories and tools are a symbol of decadence to the perverted West. Let us beware of her dangers and be careful," they claim on their website.

Cannot marry without the permission of a male guardian

Although enforced marriage was officially outlawed in Saudi back in 2005, it's still a common practice—with girls as young as 8 being married to much older men, in return for money, favors, debt forgiveness. In a country that is so strongly segregated, many marriages are still arranged by a girl's parents, and—in theory—she has the right to refuse to wed, but in practice—that's rarely the case. In the situation where a female finds her own future spouse she must get the permission of her male guardian before being allowed to marry. This even extends to older women, which can often become farcical—as in the case of one elderly widow who had to seek the permission of her son before being allowed to remarry. On the other end, women can also be made to divorce against their will. One poor couple, who had been happily married for a number of years and had two children together, were forced to divorce after the woman’s half-brother was granted guardianship following the death of her father (who had previously given his permission for the marriage). The asshole half-sibling demanded the divorce be granted on grounds that the husband was from a lower tribe and had failed to disclose this fact at the time of marriage. Adding further to the travesty, after the woman refused to move into her half-brother’s home, for fear of domestic violence, she was forced to languish in jail for four years, along with her baby daughter, until the Supreme Judicial Council finally saw fit to overturn the divorce ruling.

Photos of women in books, magazines, and product packaging from overseas are heavily censored before being allowed to enter the country. Black markers are used to paint over any skin that may be showing in photos—all over a woman’s image in some cases, and often pages are just completely ripped out.

Under Saudi law a woman is required to have a total of six men swear for her in any legal proceedings, even when it comes to something as simple as buying or selling a property. When it comes to carrying out transactions in a government office or court, a woman is obligated to provide two male witnesses to testify to her identity, in addition to a further four men to swear that the first two are credible witnesses. Yep, really. Oh, and get this…a woman’s testimony in court is worth only half that of a man’s!

Under Sharia law, in order to prove she didn’t consent to sex, a woman has to provide four witnesses to back up her account of events. And if she’s raped by her own husband? Ha! Don’t be so silly! Under the same law, it is simply not possible for a woman’s husband to rape her, she's his property, to do with what he will. Not surprisingly, the vast majority of rapes go unreported, as, victims who are unable to prove they were violated, face the very real possibility of actually be convicted of fornication, and the punishment for extramarital sex is public whipping, or even stoning to death.

Under Saudi law, children belong to their father who has sole legal guardianship. In the case of divorce, a woman may sometimes be granted custody of her children, but only up until they turn age seven.

All in all, life for a woman in Saudi is far from a bed of roses, however, as is often the case, her level of freedom can vary drastically, depending on who she is, her financial wealth, connections, family standing and beliefs, etc.

And, there have been a few victories for women’s rights in the recent past. King Abdullah—who has been cautiously pressing for reform, but has to walk a fine line in a country where conservative clerics have such great power—opened the first ever fully integrated co-ed university in 2009, and appointed the country’s first female minister. Women are also now permitted to work in lingerie stores, as managers of factories and at supermarkets.

Then, in, 2012 Abdullah decreed women will be permitted to run as political candidates, and even allowed to vote, in the 2016 municipal elections—presumably though, only if they can persuade a male guardian to accompany them to the polling station.

Interestingly, there now remains just one country in the world that permits men to vote, but not women. It's that bastion of women's rights, the Vatican City.