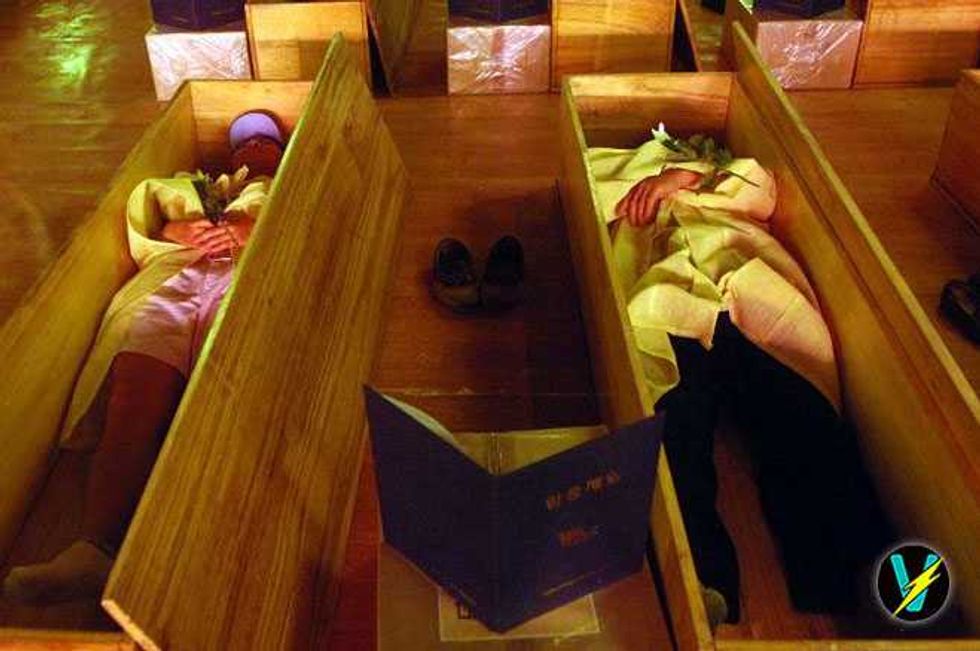 South Korea has a problem and they have come up with a pretty bizarre new way to try to combat it.

On an average day, 42 people commit suicide in South Korea. 42 people EVERY DAY, that's over fifteen thousand every year,  making it the suicide capital of the developed world and Asia's most depressed country.

What You Need To Know About Suicide And Depression

The leading cause of depression that drives so many to take their own life, is mental stress—followed by, physical pain, economic hardship and family problems, in that order.

In the last 30 years, South Korea’s economy has exploded, employment is on the rise, and homelessness is down. It’s expected to exceed Japan’s economy in the next few years. Shouldn’t South Koreans be happy?

Not so much. It’s because of this rapid influx of wealth that many theorize South Korea’s population is more unhappy than ever before: People feel social pressure to succeed, and if they don’t, depression sets in and they want a way out.

The non-suicidal citizens are baffled, and in a bid to solve this puzzle, a bizarre movement has sprung up with the hopes that giving people a little taste of death will restore their will to live.

It’s called the "Well Dying" or "Near Death" movement, according to Vice.com and it involves "fake funeral" services. A philosophical guru lectures them for a bit and then has them write their own eulogies.  They then climb inside a coffin and meditate for half an hour.

One guru estimates that he gets whopping 300 clients per month, which adds up to approximately 3,000 a year, and 50,000 over the last decade.

“All I want to be is a good father. However, there is so much competition, I was under a lot of stress. Waking up each morning and living each day felt too painful. I was looking for something that would soothe and heal my mind. When I was inside that coffin, I felt like the weight of all my worries was lifted.”