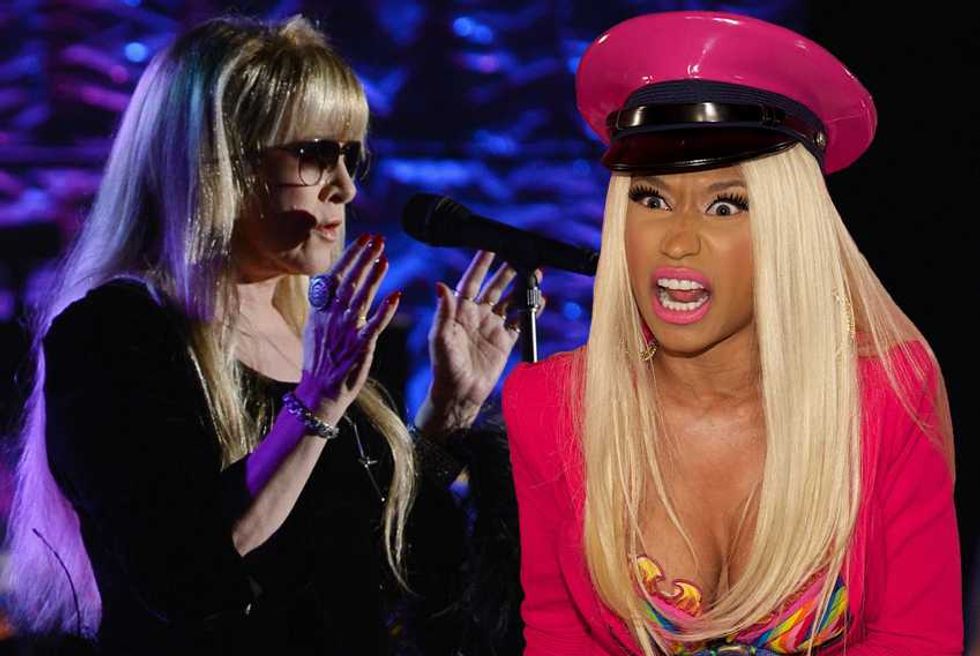 Many have spoken out about last week's fight between American Idol judges Nicki Minaj and Mariah Carey, whether to question its validity or attempt to find a bright spot in the otherwise sad case of two grown women bickering like children. Those associated with Idol tend to give the snooziest of responses, while comments from someone like Cee Lo, a fixture on a rival network's rival program, should be taken with a grain of salt. But former Fleetwood Mac singer Stevie Nicks? Now this is someone whose opinion deserves to be heard—if only because she is a goddess. Stevie Nicks! Talking about the Idol nonsense! If you need a refresher of what exactly this means, please direct your attention towards Maya Rudolph and Christina Applegate.

As a guest coach on Idol last season, Nicks is now forever loosely involved with the show, and thus was roped into the gossip cycle during an interview about her new documentary (In Your Dreams) on Monday. "How dare this little girl! … If I had been Mariah [Carey] I would have walked over to Nicki [Minaj] and strangled her to death right there," Nicks said. She's been supportive of the current crop of pop acts vying for even some of her brilliance, approving of both Glee's 2011 Rumours episode and that Miley Cyrus "Landslide" cover, so we understand why she'd be protective of a certain power ballad diva. "I would have killed [Nicki] in front of all those people and had to go to jail for it." And this is why we wish there was reality television back in the '70s and '80s.

Nicks is also in favor of aspiring artists getting started on a reality program like Idol. "That’s how you get seen these days," she noted, though not necessarily maintaining that she would have auditioned for such a show years ago. "I would have had to drag [Lindsey Buckingham] kicking and screaming. He probably would have given them the finger." Even better.