The Many Faces of Drake

The Battle Series ​Verzuz ​Is Slowly Losing Its Appeal

After portraying a pedophile in Netflix's You, multiple women have shared accounts of D'Elia making advances at them when they were underage.

Comedian and actor Chris D'Elia has been accused of sexual harassment.

Multiple women have come forward saying D'Elia had harassed and groomed them when they were minors. One of these women, Simone, pointed out the irony between his behavior in real life and the habits of his pedophilic character on the thriller-drama Netflix show You.

i still can’t believe netflix cast chris d’elia as the pedophile in season to of “you” like the literal IRONY
— simoné (@simoné)1592346878.0

For some reason Justin Bieber decided to subject himself to a comedy roast (quite why anyone would do this is beyond us).

The four hour roast was taped on Saturday night in Los Angeles and was led by Roast Master Kevin Hart.  Also in attendance was the singer’s nervous mom (glutton for punishment) and a celebrity audience.

With nothing off limits, his celeb friends let him have it. Big time.

It kicked off with Kevin Hart saying;

“This is possibly the beginning and the end for Justin Bieber”

The firing squad then took turns to shoot Bieber down, taking jabs at his brushes with the law, egging incidents, his Canadian roots and of course his ex Selena Gomez (who wasn’t in attendance unsurprisingly).

Here are a selection of the best jokes;

"You’re about to get fucked harder than Orlando Bloom fucked Selena Gomez."

“You acted so much like a pussy on that show that Ellen [Degeneres] tried to eat you."

“It seems like only yesterday you were discovered on YouTube. Time flies when you’re a piece of shit."

"Selena Gomez had to fuck you. She is literally the least lucky Selena in show business."

"Justin Bieber really does have it all. I'm serious. He has a dick and a pussy."

"My castmate on SNL, Kate McKinnon, does a perfect impression of Justin. Right down to the clit."

"Justin's Canadian. He's actually considered America because no Canadian's ever been this much of an asshole."

"There's even a wax figure of Justin in Madame Tussauds in London. I've seen it, he's face down in a wax Usher's lap."

Snoop had no problem getting in the mood, lighting up a joint on stage and admitting;

“I don’t need a warmup! I’ve been smoking and drinking’ I feel real good”

He then proceeded to drop the 'n' word at least 20 times—don’t expect to see that in the edited version broadcast on March 30.

Kendall Jenner and Kourtney Kardashian were in the front row of the audience and managed to smile gamely when there were a few quips about Bruce Jenner.

Martha Stewart proved to be a surprise hit, saying she was there to give Justin tips for when he “inevitably ends up in prison” and offering to teach him how to make a shank.

The biggest laugh of the night however was nothing to do with Justin—everyone cracked up when they saw Hart and Shaq standing next to each other!

Bieber took to the stage at the end of the night and apologized to the world for his unending spree of embarrassing headlines.

"I've turned a lot of people off in the last few years. But I know I can still put out good music and turn everything all around.

There was really no preparing me for this life. I was thrown into this at 12 years old.  I didn't know what I was getting myself into. There were moments I am proud of. And there are moments I am disappointed with myself for. But the things I have done don't define who I am. I am a kind hearted person who loves people. And through it all, I have lost some of my best qualities. For that, I'm sorry."

Bieber called the celebrity roast, which comes just after his 21st birthday, "a turning point" in his life. 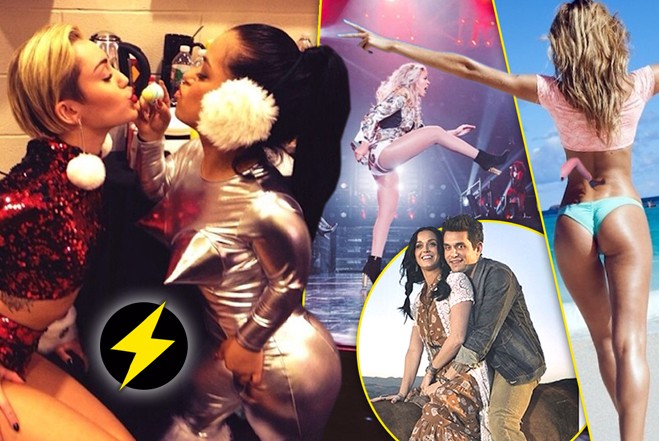 Previous Next
ByLeah Ornstein,They are rich and famous and certainly not shy about sharing their candid snaps with millions of people around the worldon social mediaâ�� for better or for worse.This week, Hollywood's hottest stars were getting ready for the holidays by uploading naughty and nice photos, fromBritney Spears' nearly naked behind-the-scenes shot from her music video andNaya RiveraandBig Sean's red hot Christmas card, to birthday girlTaylor Swift's smelling the roses snap andJohn MayerandKaty Perrylovin' it up on a bull.If you are too busy to scour all the social media sites for the images,Popdust has the rundownfor you of the 20 coolest, not-so-cool and WTF social media photos inour weekly feature. 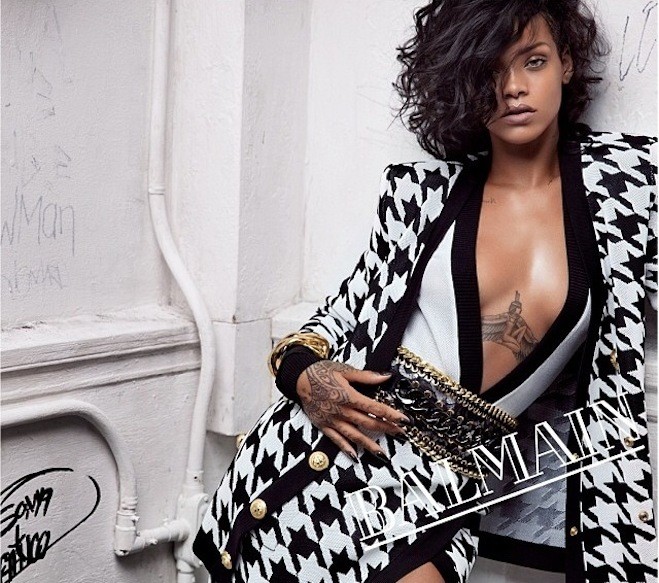 Previous Next
The Cool:Rihannaflaunted her extensive body art collection and hot body for herBalmaincampaign, uploading some of the racy images on Instagram. 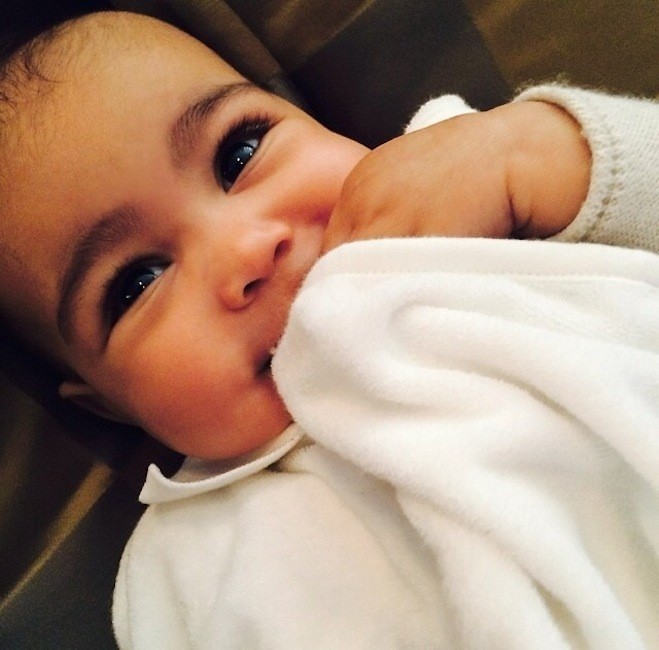 Previous Next
The Cool: Kim Kardashian took a break from taking sexy selfies and shared an adorable shot of North West smiling. The image caused a bit of controversy for the reality star, after people accused her of waxing her infant's eyebrows. She denied the allegations. 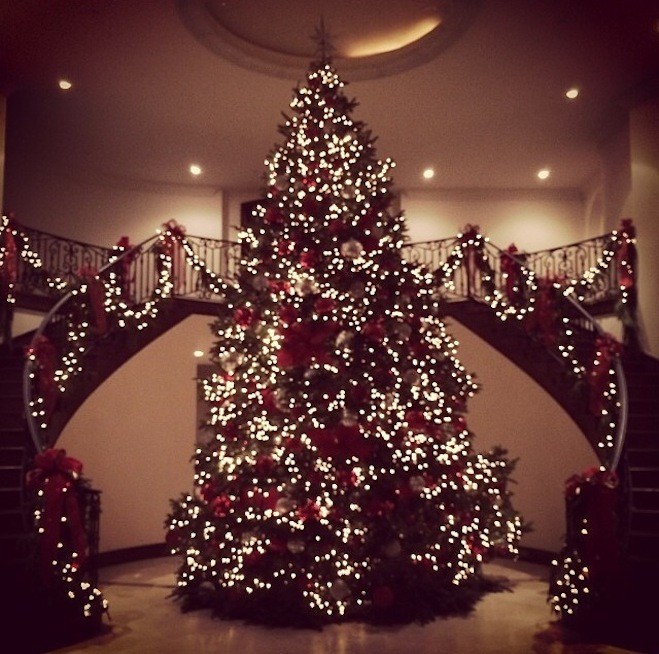 Previous Next
The Not-So-Cool:What's the best way to start the rumor mill churning? Go work out with aKardashianand then upload a photo ofKris Jenner's ridiculously large tree.Matt Kempwasted no time showing off hisalleged budding romancewithKhloe, who filed for divorce this week fromLamar Odom. 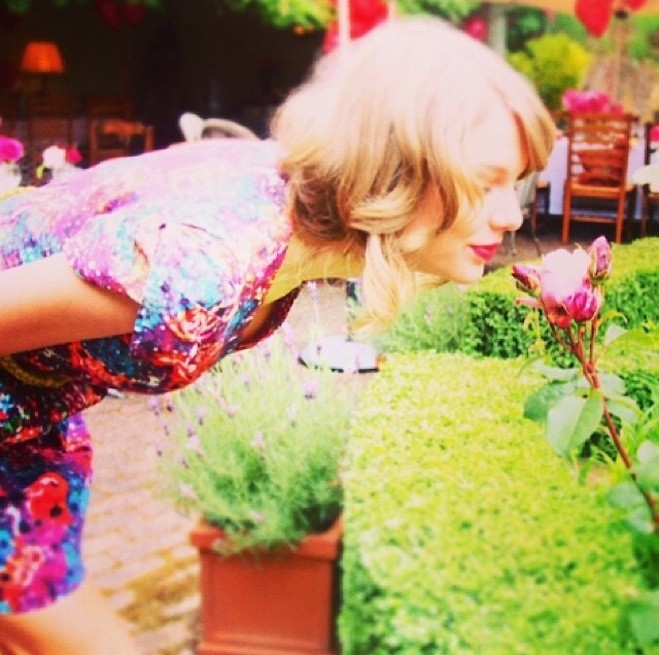 Previous Next
The Cool:Taylor Swifttook a little time to stop and smell the roses onher 24thbirthdayin Australia. 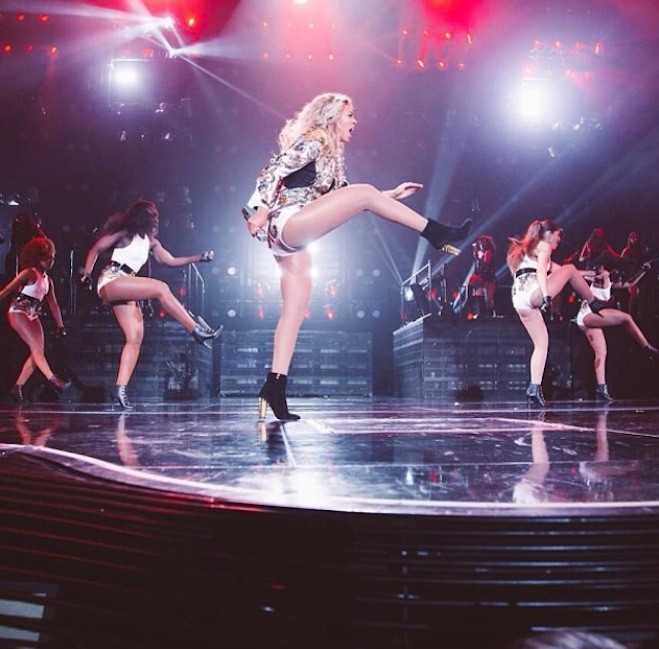 Previous Next
The Cool:Beyonce, who secretly dropped herrecord-breaking albumover the weekend, had some time on the side to show off her hot body on Instagram. 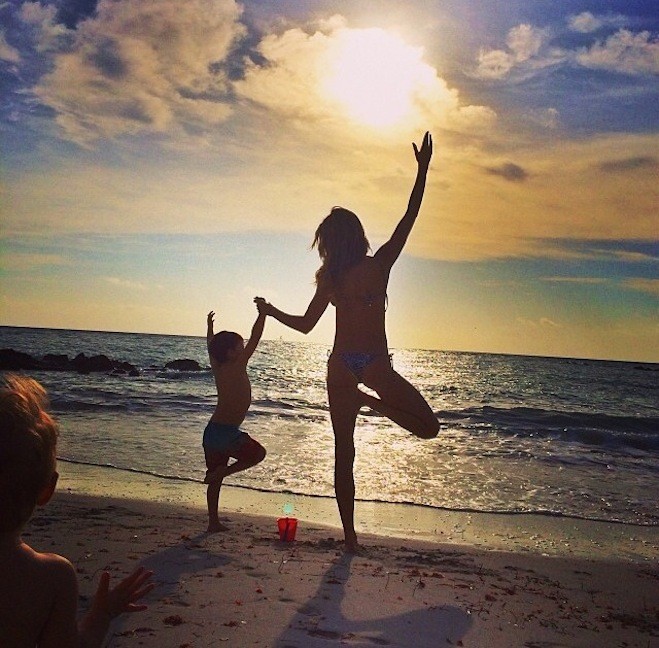 Previous Next
The Cool:SupermomGiselehit the beach in Miami with son Benjamin, showing off her flawless figure in a skimpy bikini while doing yoga poses. 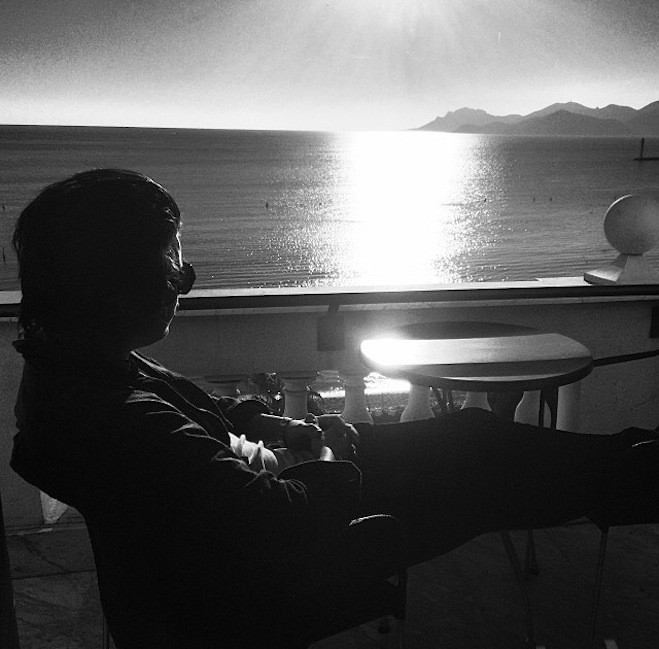 Previous Next
The Cool:Harry Stylestook a break from his busy jet-setting lifestyle and datingKendall Jennerto enjoy the view from his Cannes hotel room. 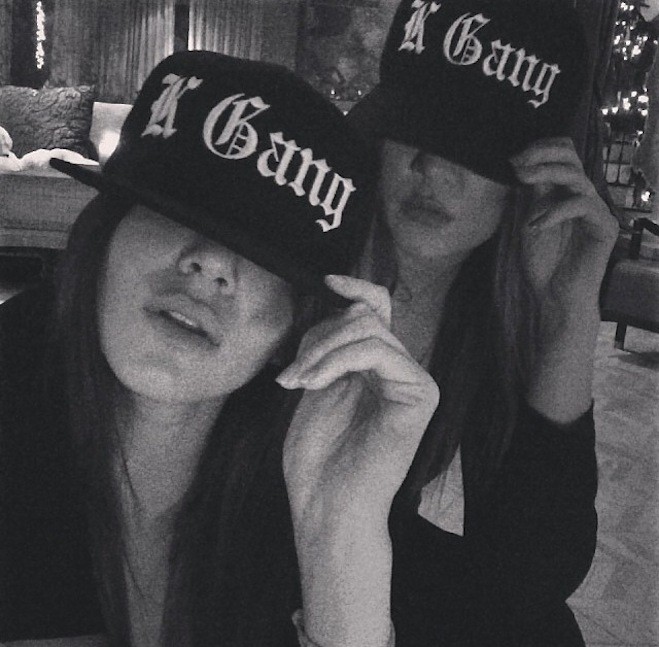 Previous Next
The Not-So-Cool:In case you didn't know that all the girls in the Kardashian/Jenner family have names that start with the letter â��K,â�� now you do with the new â��K Gangâ�� hats, which feature an old English font.ThoseKardashiansare so hard kore.Here areKhloeandKendallmodeling their stupid new hats. 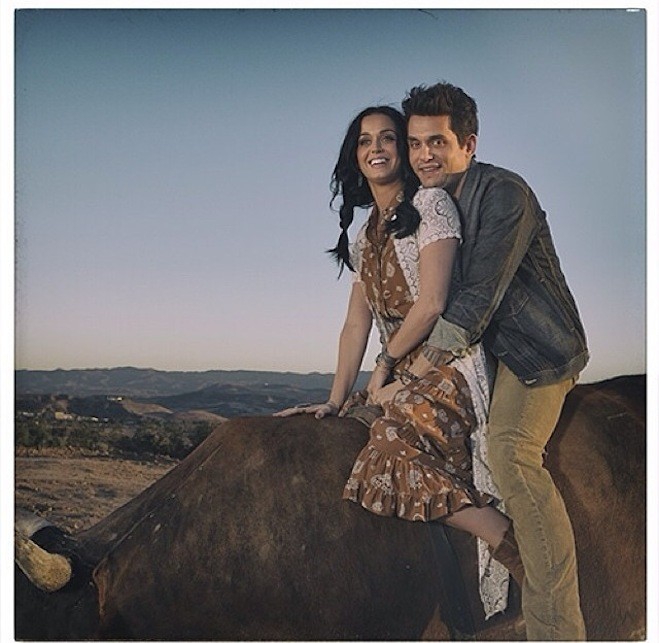 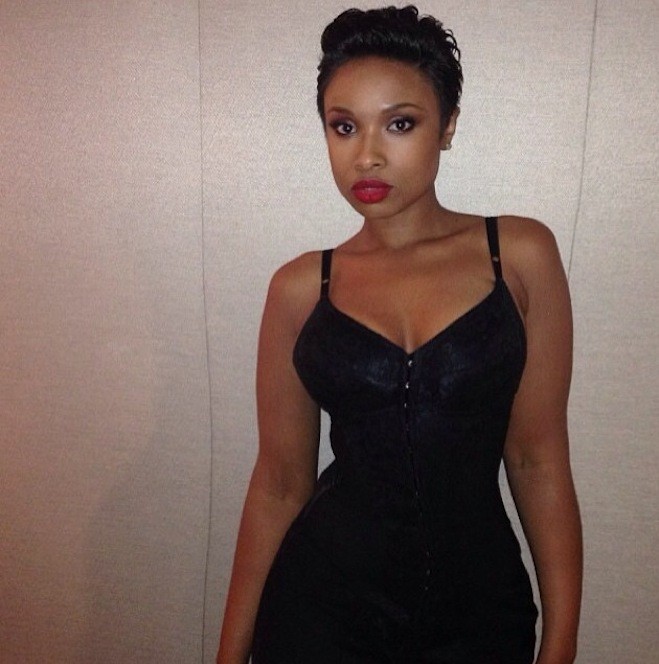 Previous Next
The Cool:Jennifer Hudsonlooked gorgeous in this seductive snap from the set of her music video. 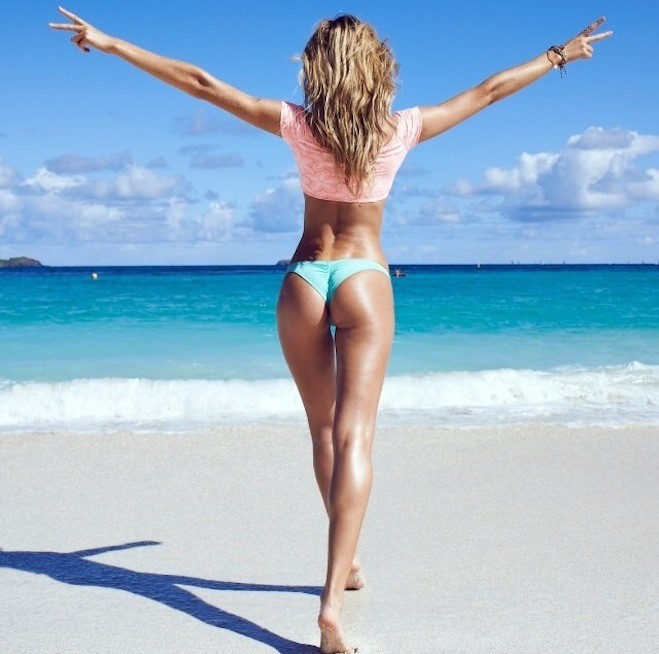 Previous Next
The WTF:OkayCandice Swanepoel, we know you have the perfect body, but do you have to rub it in our faces all of the time?Thesupermodelhit the beach during aVictoria's Secretshoot, leaving little to the imagination and gushing over the lingerie giants â��new cheeky bottoms.â�� 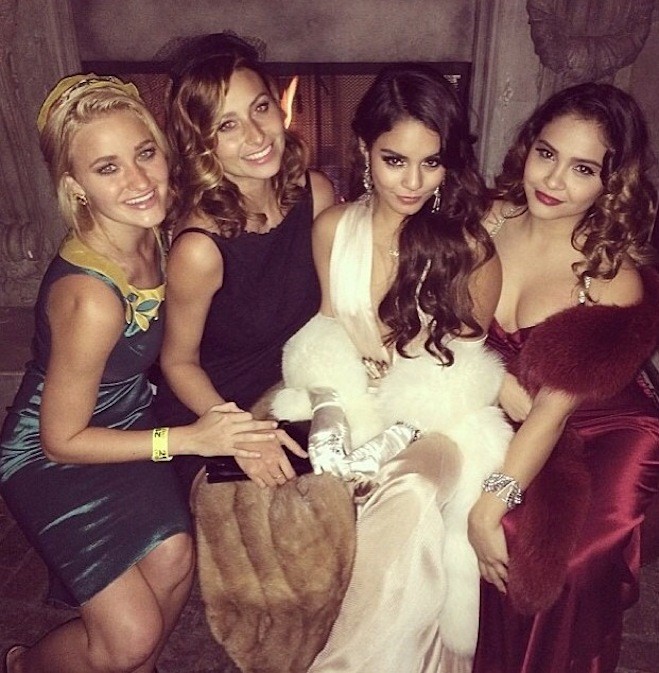 Previous Next
The Cool:Vanessa Hudgensgot all glammed up and celebrated her 25thbirthday with pals. 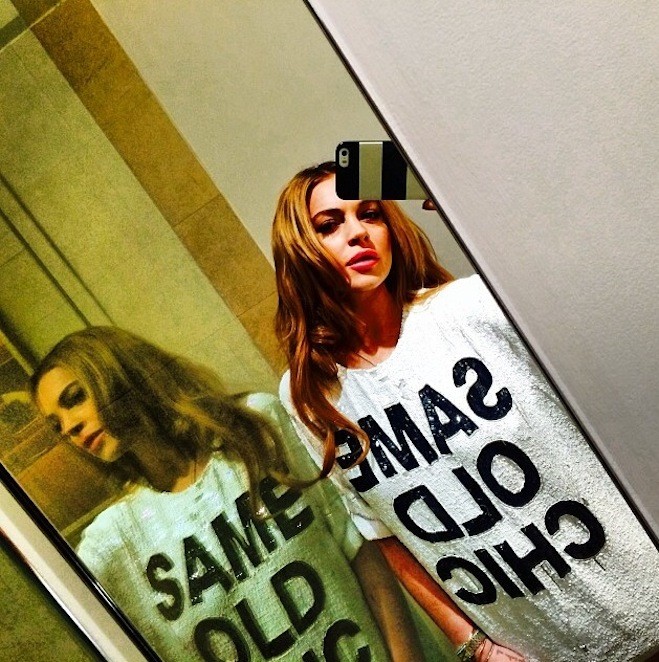 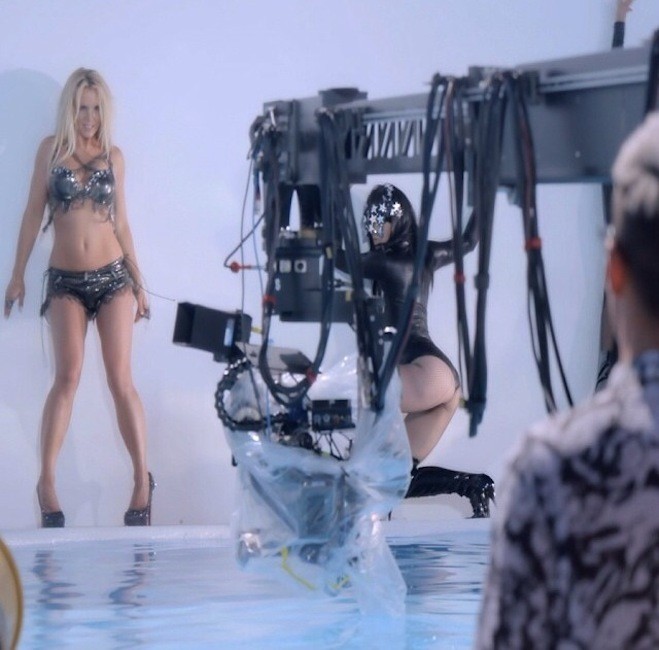 Previous Next
The Cool:Britney Spearswas scantily clad in this sexy behind-the-scenes shot from herWork B**ch video. 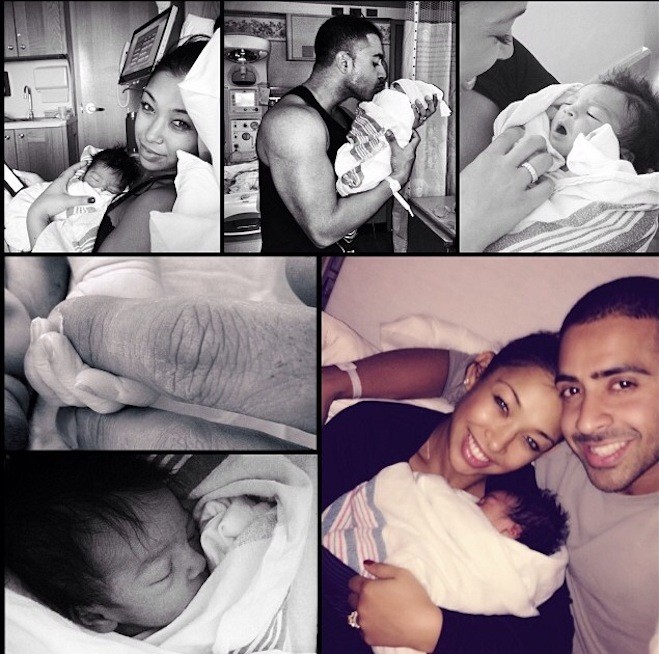 Previous Next
The Cool:Jay Seanis a new dad! The singer uploaded a montage of sweet snaps of his new baby girl Ayva. 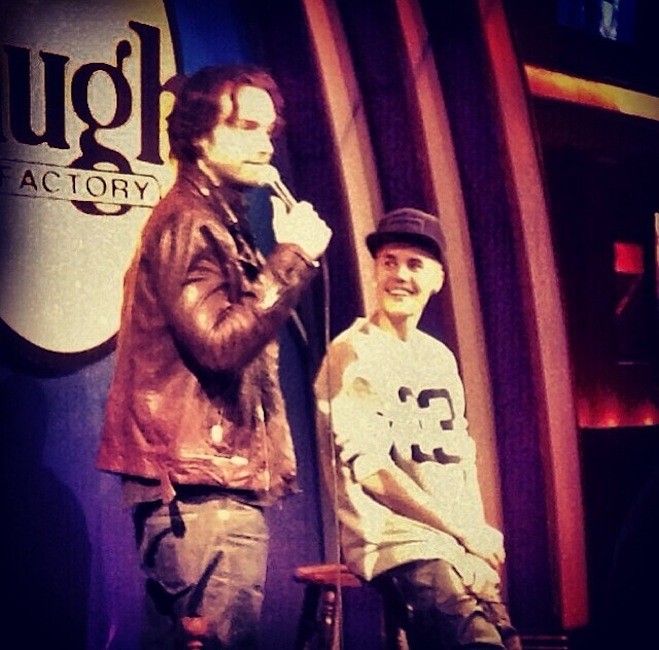 Previous Next
The Cool:ComedianChris D'EliaroastedJustin Bieberon the stage of the Laugh Factory, making fun of his clothes and stuff. 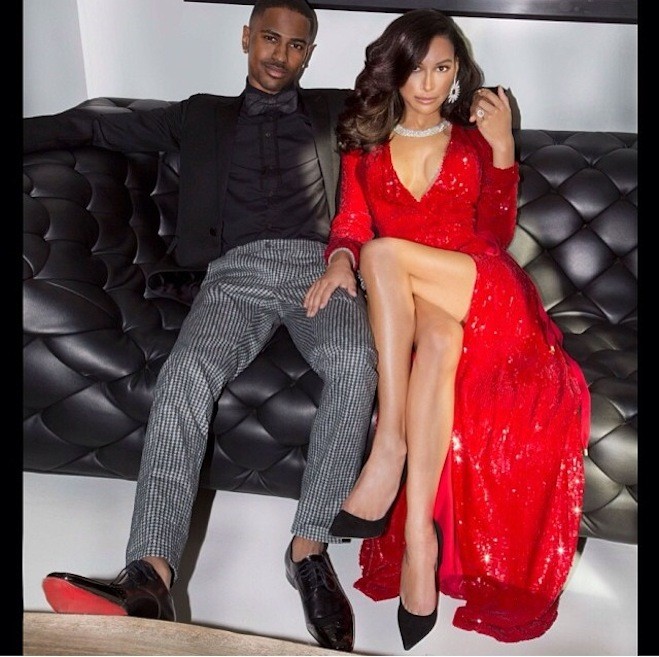 Previous Next
The Not-So-Cool:Naya RiveraandBig Seanwent a little over-the-top with their Christmas card, shot by proTony Duran, dontcha think?She showed off most of her body in a revealing red dress, while he made sure to get the sole of his maleChristian Louboutinsin the shot. 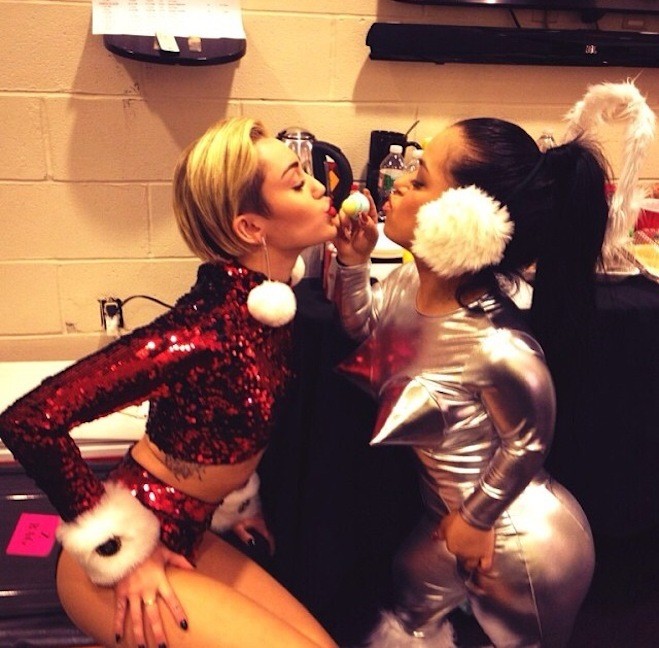 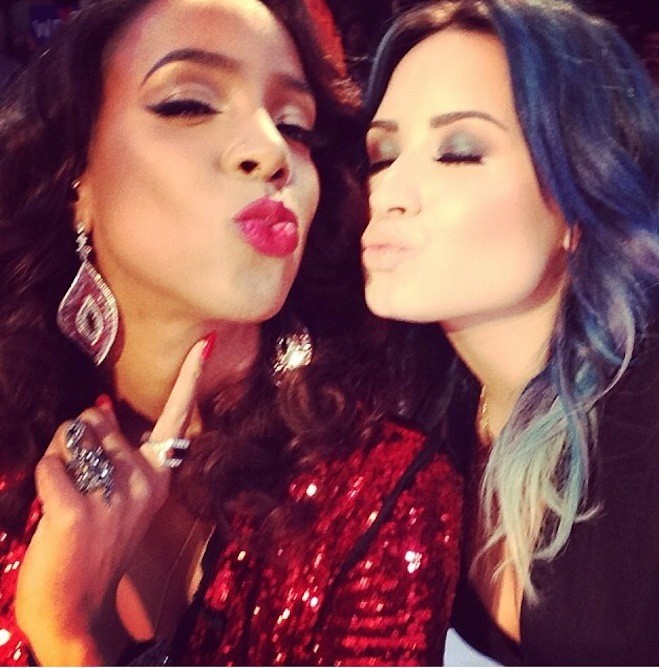 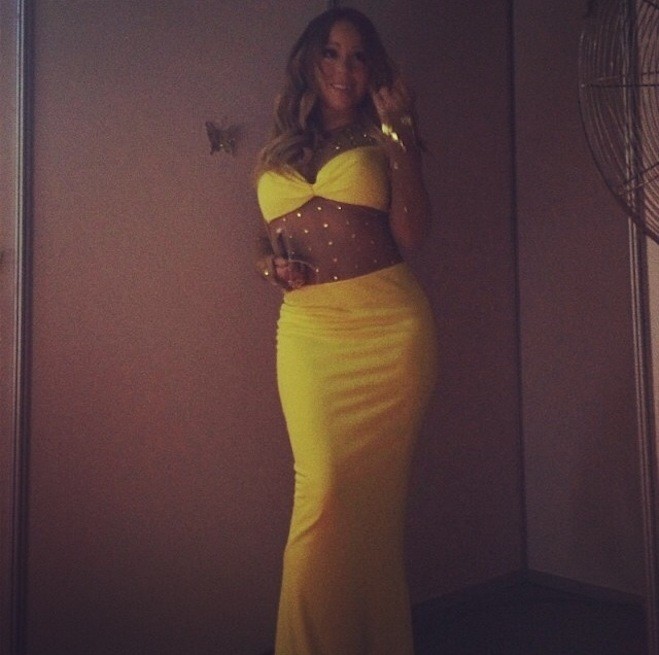 Previous Next
The Cool:Mariah Careyflaunted her figure in sexy yellow getup.
By Leah Ornstein,

They are rich and famous and certainly not shy about sharing their candid snaps with millions of people around the world on social media – for better or for worse.

This week, Hollywood’s hottest stars were getting ready for the holidays by uploading naughty and nice photos, from Britney Spears’ nearly naked behind-the-scenes shot from her music video and Naya Rivera and Big Sean’s red hot Christmas card, to birthday girl Taylor Swift’s smelling the roses snap and John Mayer and Katy Perry lovin’ it up on a bull.

If you are too busy to scour all the social media sites for the images, Popdust has the rundown for you of the 20 coolest, not-so-cool and WTF social media photos in our weekly feature.