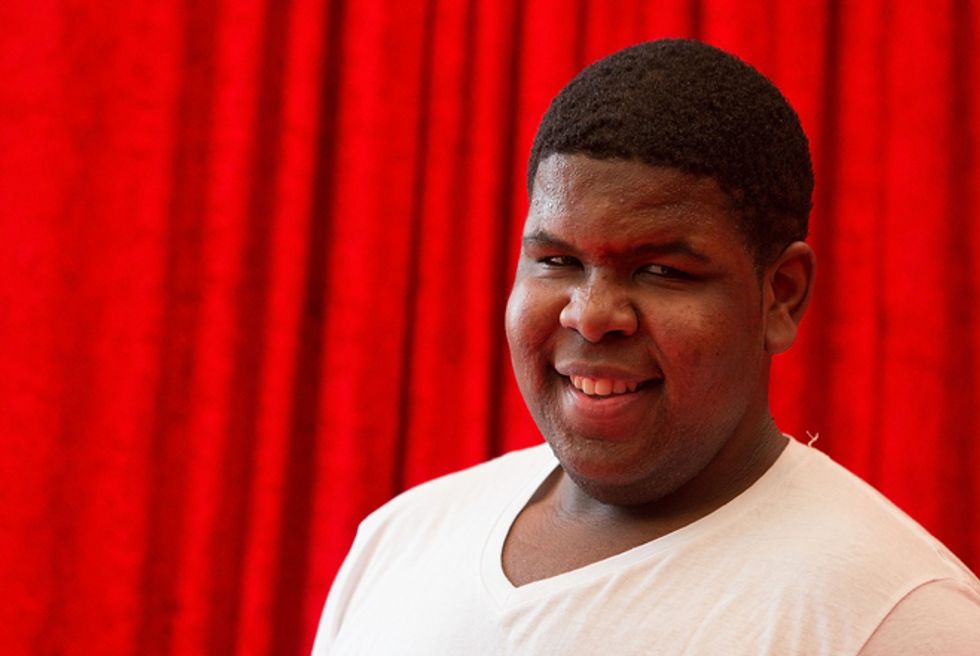 Assuming "Thrift Shop" ever relinquishes its hold on radio and the pop charts, next in line for Macklemore and Ryan Lewis off The Heist's is the fine affirmational jam "Can't Hold Us"—already into the Top 40, and sure to keep climbing. And where 51-year-old music vet Wanz carried "Thrift Shop" with his golden-throated crooning, "Can't Hold Us" boasts the Top 40 debut of 22-year-old hook man Ray Dalton, a gospel and R&B singer part now also an inextricable part of the Mack/Lewis live camp.

We caught up with the extremely affable Dalton to talk about his recent experiences as a celebrity and in-demand live performer.

So where are you now?

I just got home to Seattle. We're shooting a video for "Can't Hold Us," and then we're flying right back on the road tomorrow.

What can you tell me about the video?

I can't even…it's hard to describe because we shot it in so many different places. But the video's gonna be great, gonna be really, really epic. I don't want to give too much away. We shot in New Zealand. That's one thing I can give away. It's gonna be very epic.

You were just at South by Southwest, right? What was that like?

It was actually my first time being there! And it was really hectic, but it's kinda fun at the same time, because you get to see all your friends. My friend Allen Stone was there…and Kay Slay, and I got to meet Rachael Ray. She was really cool. It was fun, you know, we're working hard and doing a bunch of shows which is really fun. We're doing like three shows a day. I haven't done that. But it was just kinda go with the flow and have fun, at the same time. I loved it.

What did you and Rachael Ray talk about?

She just talked about my singing. I got off stage, and she gave me a kiss on the cheek. And I was like "OH MY GAWSH!" And then we went up to her, like her hostess area, and then we talked more, and she was just like "Thank you guys for coming, it means a lot…" And we took a picture.

So let me ask you about how you got hooked up with Macklemore and Ryan Lewis. How did that all come about?

Well, um…Ryan once heard me sing on a song from another artist. He was chilling with this other artist, and Ryan Lewis was like "Wow, I wanna meet this guy." So [Ryan] Facebooked me, and I ended up meeting at their studio. And I started going to the studio and just record, just record, and then I met Ben, and we worked on "Wings"—that was the first song that we worked on. And I kept on working with them, and being part of the creative process.

And then "Can't Hold Us," they were like "OK, we have this song, and we need you to make a hook." And I couldn't make a hook for it. And I ended up coming in the studio one day and making the "Can't Hold Us" hook. That's how it all started.

I always have faith in all my music. So I was like, "This is gonna be great!" And I was really young, too…I think I was 18 at the time when I met them?

What was it like being part of their circle, of Macklemore and Ryan Lewis and everybody, when "Thrift Shop" started exploding? Did you think that was gonna happen? How did your life change at that point?

We had no clue what was gonna happen. You go and you do a song, it's like your baby, you're like "I hope my baby can succeed in life, and I hope it does good!" And out of like…it was like a night, I woke up the next morning, it's playing on the radio everywhere, everybody's talking about it. It was just crazy. And our team, we were just so shocked, like, "Oh my gosh!" We didn't know it was gonna be this crazy.

Did you know at that point that "Can't Hold Us" was gonna be the next song that they were gonna really push?

You know, we just focused one thing at a time. "Thrift Shop" was the thing, and so we were focusing on that, doing everything we could do to put that in the light and give it its respect that it deserves. And after we started doing a lot of press, people were talking about "Can't Hold Us." And so we decided it was gonna be the next single. And so now we've been pushing everything we can with "Can't Hold Us" now.

Were you a full-time musician when you got hooked up with those guys?

I sing in a Gospel choir. I sing in the Total Experience Gospel Choir. And I taught tennis lessons.

Are you still teaching tennis lessons?

No, not anymore! (Laughs) Not anymore, I'm a full-time singer/musician.

Did you have to have a conversation with your students, like, "I'm sorry guys, but I'm like a big pop star now, so we can't work on your backhand anymore"?

(Laughs) Nah, I just…the more crazy as we got, I kinda like didn't do as much. So I kinda eased out of it. And it was kinda hard to…just being a teacher, you want to be able to be a good teacher, and that's like, watching people develop, being there for them. And once you can't be there for them, you shouldn't be doing it. So it was just kinda like…something has to give.

So what's your life like now? Are people recognizing you in the street a lot?

I think it's a blessing. I think it's a blessing that I get to hear myself on the radio. The first time, I freaked out. I was with one of my friends, and we were in the car listening to the radio. And the next thing you know, "Can't Hold Us" comes on. And that was my first time hearing it on the radio. And we just stopped the car, and it was like "OH MY GOSH, OUR SONG'S ON THE RADIO!" And my family's always calling me, like "YOUR SONG'S ON THE RADIO!!" It's been a blessing. It's been really cool. It just makes me wanna work even harder, and do another song.

So what are your plans now? Do you have an album in the works?

Yes, I've been working on some music, but my main focus is the Macklemore camp. I'm a part of their team, and so I want to make sure that I can put as much as I can into their dream, and then when it's time for mine, we'll focus there.

Are you friends with those guys off-stage as well?

You have any crazy stories, life on the road stuff?

Well, Ben dared me…We kinda had a bet going, and I lost it, so I had to get my ears pierced. (Laughs). I guess it's not too crazy of a story, but I was a wussy about it.

What was the bet over?

I forget what it was about, it was so stupid, it was so weird…Ben's so weird, he's a weirdo. [He said something] and I was like "Yeah, that's not true." And then he pulled something up, and I guess I was wrong, so he was like "You gotta get your ears pierced." But I thought he was joking… I was like "Yeah, whatever man," I didn't really even think about it.

Have you made use of the piercing at all?

Never in my life!

Are you and Wanz friends? Have you guys been hanging out at all?

Wanz is like the father of the group, kind of thing. So he's always on his own thing, and when we're on tour, 'coz there's so much going on, I kinda like to get away and go play tennis, play volleyball, go have lunch with the friends. So I only really hang out with Wanz on tour, coz when I'm home, I'm working on singing, playing tennis, visiting my family as much as my can.

So you're a pretty big tennis guy, I take it. You more of a Federer, Nadal or Djokovic man?

Oh man, it was so crazy. It happened so fast! So we went straight from New Zealand to New York. Did rehearsals. And at first we were a little overwhelmed, because we wanted to be good. Kendrick Lamar was on it, and Ben really looks up to Kendrick Lamar, really respects him, so he wanted to do a really good job, and we all did. And it ended up just like…somehow, just like we got this natural energy, and ended up just like screwing around on stage. And it came across looking good.

Oh yeah, that was what it needed to be. When you're having fun, that's when it's a great performance. We always want to look good at the same time, but mainly we want to have fun on stage. You don't want to look bored, or scared, or anything like that.