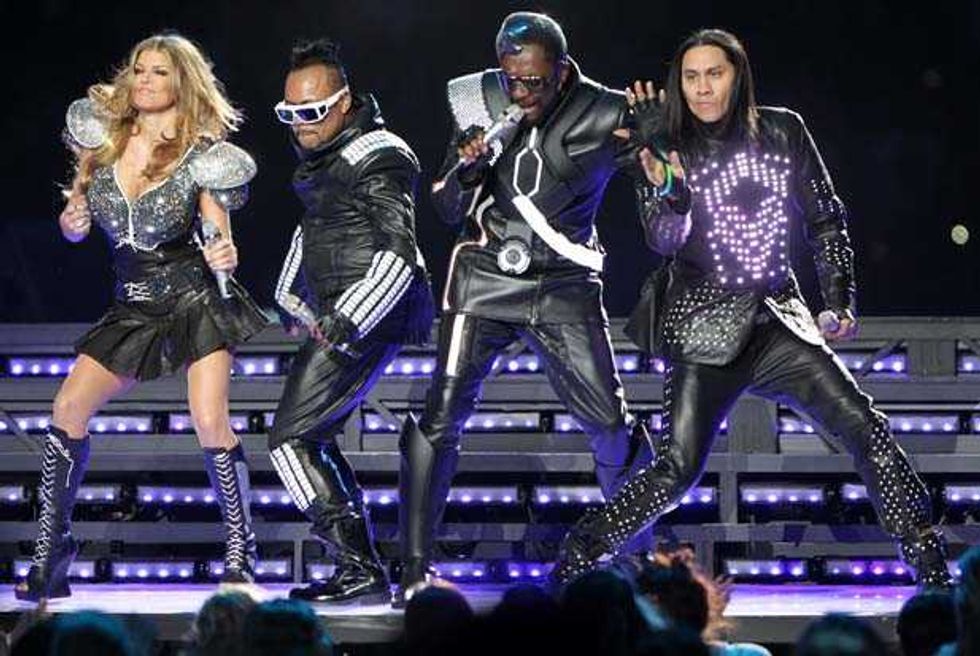 Why were the Black Eyed Peas chosen to be the first non-heritage-rock act in the years following Janet Jackson's Justin Timberlake-assisted "wardrobe malfunction" in 2003? Well, their friendliness to any corporate entity that might come a-calling might have endeared them to the evening's programmers; their catalog, which was full of Sweet 16/bat mitzvah floor-fillers like "I Gotta Feeling" even before they added the Dirty Dancing-biting "The Time" to their repertoire, is pretty appealing to programmers as well. (Nobody puts Fergie in the corner, do you hear?)

These clips pretty much answer the above question better than any rock-crit-prognosticating could. Slash came out (for a bit that actually allowed Fergie to shine), and Usher did too, and even though the spectre of Timberlake (the Janet Jackson breast-shower, you might remember) was invoked during the bit of "Where Is The Love?" that was trotted out, the whole spectacle was pretty much fine; if anything, the Peas' halftime show, from top to bottom to their inventive use of the bodies of the on-field dancers, was marked by its lack of objectionable qualities more than anything else. But that was probably most of the point, thanks to the relatively objection-proof nature—on both a crowd/sponsor-pleasing level and a non-censor-startling level—of the Peas' catalog. There was no possibility of controversy or of audience members kicking up a fuss—at least until the more sensitive members of the viewing public saw the ad for Sealy that showed a bunch of heterosexual couples in afterglow mode, which came shortly after. And that was probably exactly what the NFL wanted for its halftime show after years of awkward prime-time tie-ins and great shows that the censors tried to cast doubt on via viewers who were reading too much into silhouettes—not to mention the whole Janet/Justin thing, which had people uttering the awkward phrase "wardrobe malfunction" even during the course of the Packers' win.