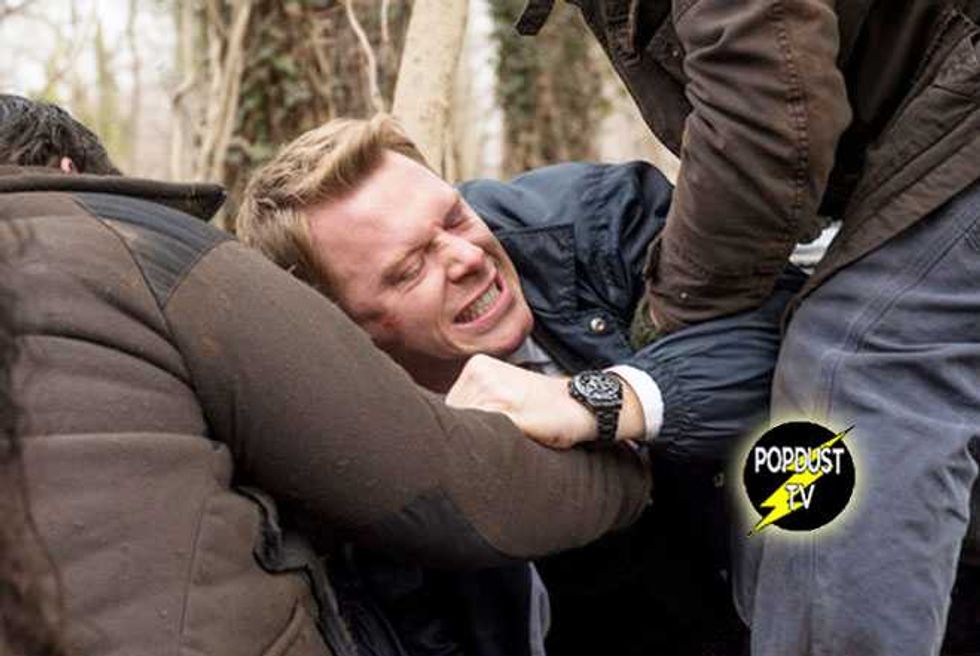 We’re always rooting for LIzzie to get her man on The Blacklist, but especially this week because Justin Kenyon is one sinister bastard. Not only is Kenyon a polygamist, child bride marrying cult leader, but he stores shipping containers on his property full of heavy artillery that belong to various terrorists around the world. Totally normal. At the beginning of the episode, Kenyon disappears when he’s kidnapped during a raid of one of his weddings…to one of his daughters. Lizzie, Ressler and Samar go to Kenyon’s compound after a van blows up killing two policemen. When they get there, they realize that the people doing the suicide bombings are actually children! Lizzie and Ressler go to investigate the compound’s church and fine nothing but dead bodies scattered everywhere. Samar is able to interview a former cult member to try and get a grip on what exactly is happening and who killed all the people in the church. She finds out that according to Kenyon’s doctrine, every man should marry 3 wives. When those wives started having male children, there were not enough women to go to each man, so Kenyon started taking the prepubescent boys to the woods to basically die. But the ones who survived in the wilderness formed a twisted sort of ‘Lord of the Flies’ army and went batshit crazy! They’re the ones who are killing all the people and who kidnapped Kenyon. Later Lizzie and Ressler drive out to the compound again to investigate, but this time their tires are blown out by the crazy boys, known as The Watchers, and they’re taken hostage. While all this is going on, Red is in St. Petersburg trying to get a hold of Alan Fitch’s safe. It just so happens that while he’s there, he’s able to contact a fellow terrorist friend who was keeping her missiles in one of Kenyon’s storage containers. Please, like Russian terrorists don’t have better place to store their freaking missiles!!! Anyway, Red gets the launch codes to the missiles and is able to use the camera and the triangulation devices on them to locate Lizzie and Ressler. How convenient. They’re rescued and a bunch of the lunatic Deliverance boys were shot in the head. And if you’re wondering what happened to Kenyon, The Watchers shoved twigs into his eyeballs and neck and he bled to death. As a viewer, that was a very satisfying way for that sick f*ck to go. Case closed…until next week of course. What did you think of The Blacklist this week? Sound off in the comments below!