The Hottest Moms and Dads of Our Favorite Pop Stars 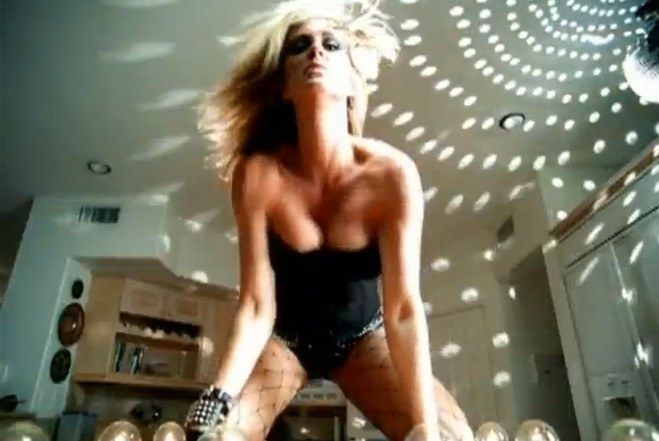 Previous Next
The horny dudes ofAmerican Piecoined the term;Stacy's momlived it. Pop culture crushes don't always have to be relegated to the talented performers who thrive onstage, especially if their parents can make you weak in the knees. Father's and Mother's Day come but once a year, which is why we're taking the time to recognize the beautiful men and women shepherding their talented children from behind the scenes. From Justin Bieber's MILF-y mom, toÂ Mr. Malik's own interpretation of the Harry Styles swoop, enjoy our selection of the hottest moms, dads and maybe, just maybe, grandpas of our favorite pop stars. They're not all single, but you can dream. (And, after you're done reading,vote for your favorite pop-star parents right here!) 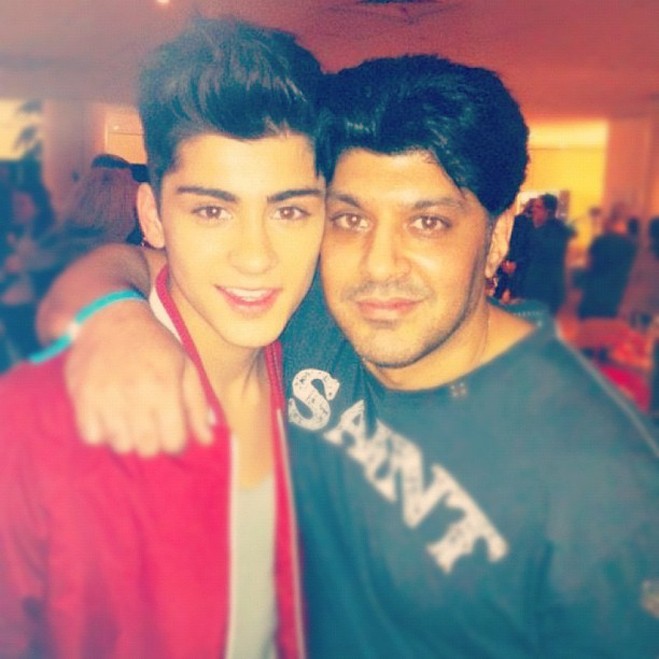 Previous Next
The proud father of One Direction'snumber one brooder, Yaser has the tall, dark and handsome thing down pat. Along with a full head of hair you just want to run your fingers through, whichÂZayn is already trying to pull offÂ himself,Â he's more likely tothrow in an extra smiley facenow that his son is successfully living out his dreams. 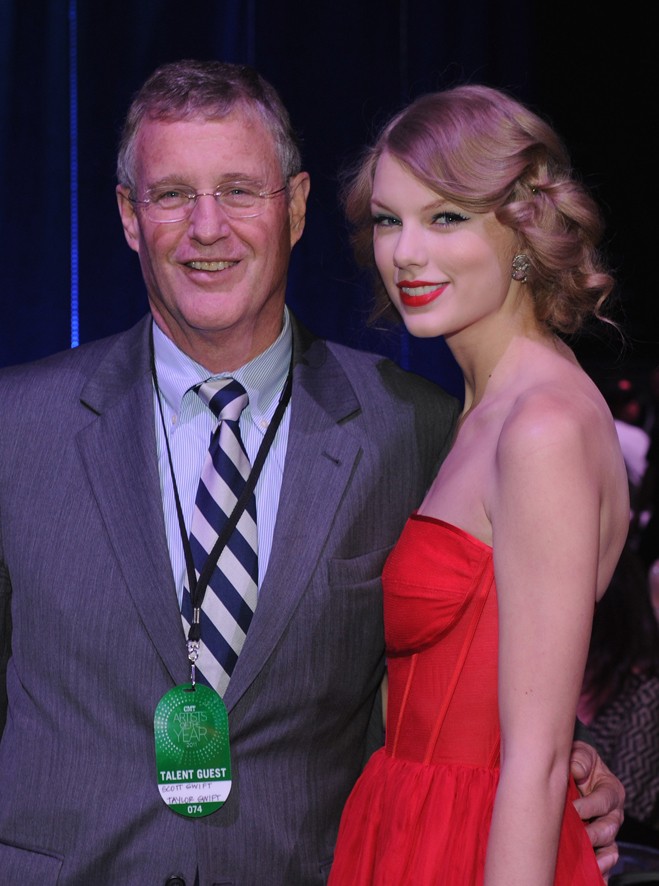 Previous Next
A local golden boy who might as well be the stand-in for a fair-haired Cary Grant, it's no wonderTaylor Swiftholds all her boyfriends to such high standards. Plus, is there anything sweeter than a successful financial advisor who moved his Merrill Lynch subsidiary, The Swift Group, to Nashville in order to help his daughter's burgeoning music career? 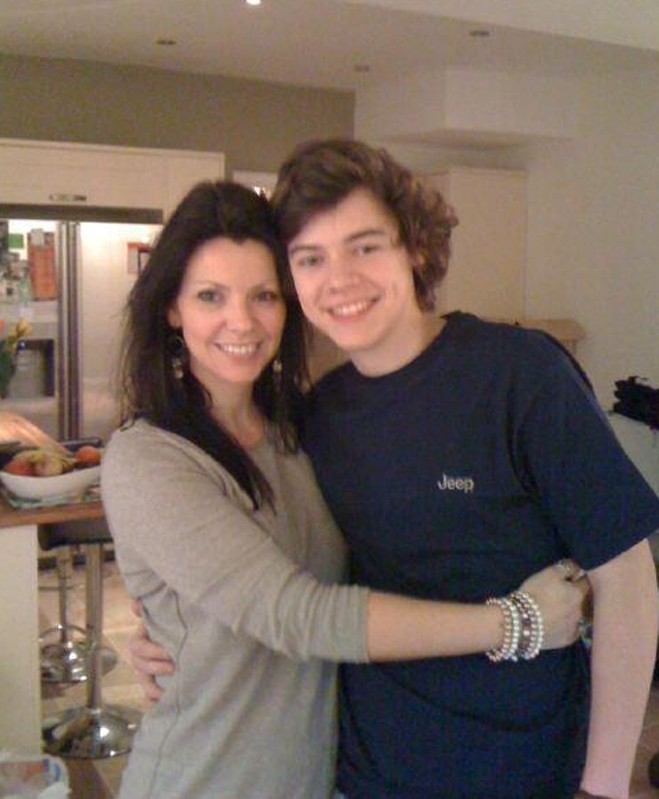 Previous Next
As the one and only mum to One Direction'sHarry Styles, Cox is responsible for bringing life to that unmistakable swoop. Her youthful appearance makes her a dead ringer for one of her son's devoted Directioners, her own support for his musical career has been visible since she accompanied him to his initialX Factorauditionâ��and likely passed for a contestant or superstar judge while on the premises. And that's not all, gents: Cox recently finishedclimbing Mount Kilimanjaroforcharity. 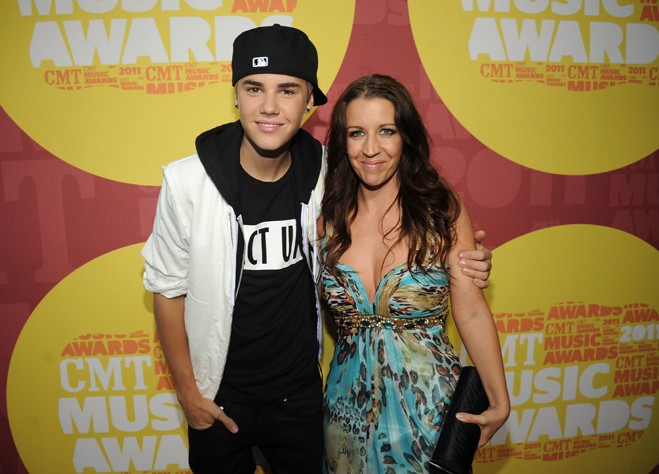 Previous Next
As a young, single mom raising the boy who would become theÂbiggest star in the pop world by 2012, Pattie donated all of her time to helping supportJustin Bieber's amateur YouTube work and dreams of stardom. Now it's her turn. Get a leg up on her likes and dislikes by reading herrecently released memoir, butÂ keep in mind that it'sbeen a while. 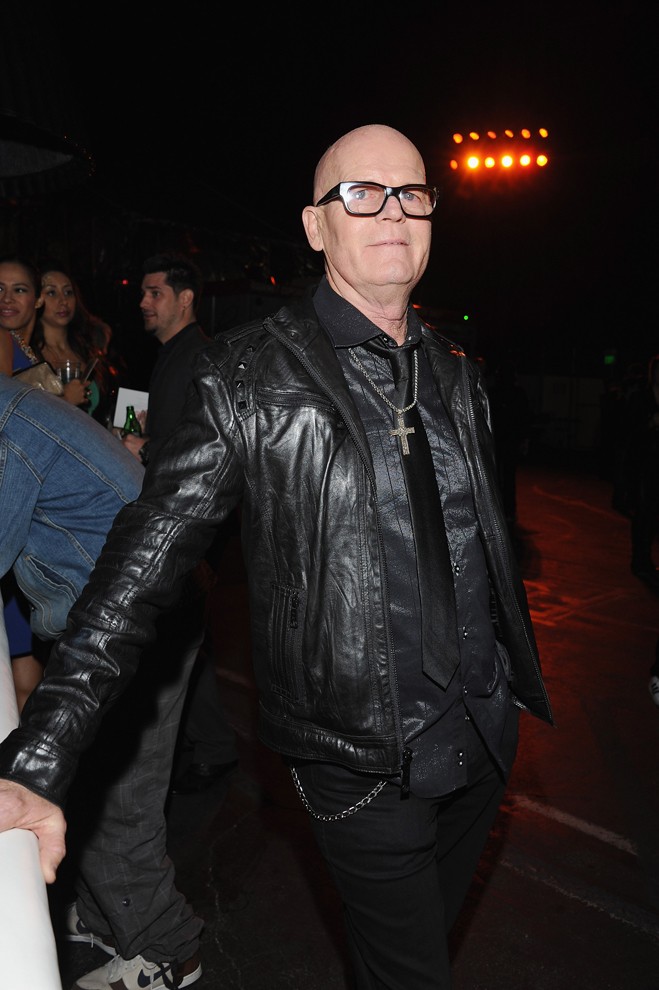 Previous Next
The long-time Pentecostal preacher has more of a resemblance to a James Carville than his record-setting daughterKaty Perrythese days, but underneath those dark-rimmed glasses and strict belief system there are signs of his rock 'n roll past. Just imagine what it feels like to tickle that silver wisp of a goatee. 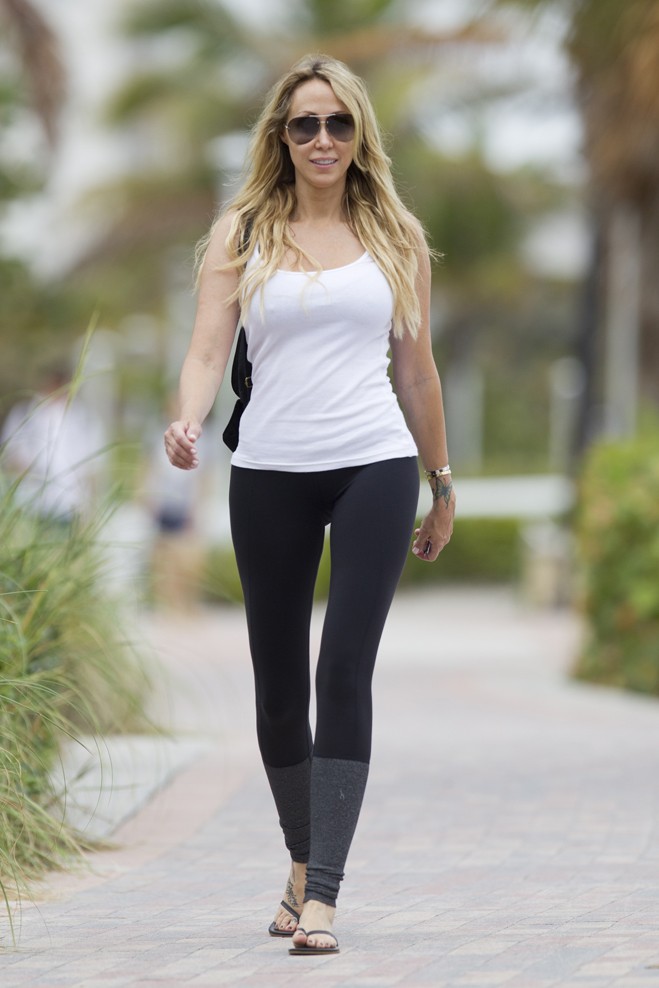 Previous Next
Co-owner of Billy Ray's at timesachy, breaky heart, Southern gal Leticia Jean looks likes she could beMiley's cool older sister thanks to those long beach waves she refuses to confine to the standard suburban mom cut, and a body that, well,can't be tamed. 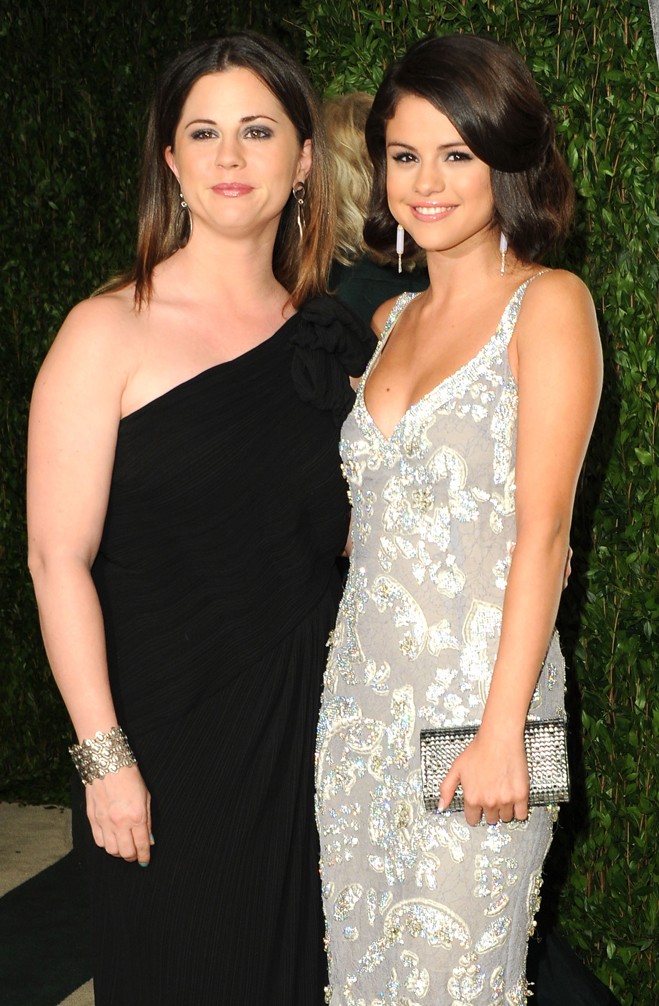 Previous Next
Selena Gomez's fun-sized mother has a smile made for the stage and cheeks you just want to pinch.Â After taking style cues from her increasinglysophisticated daughter, she's become a red carpet stunner in her own right. 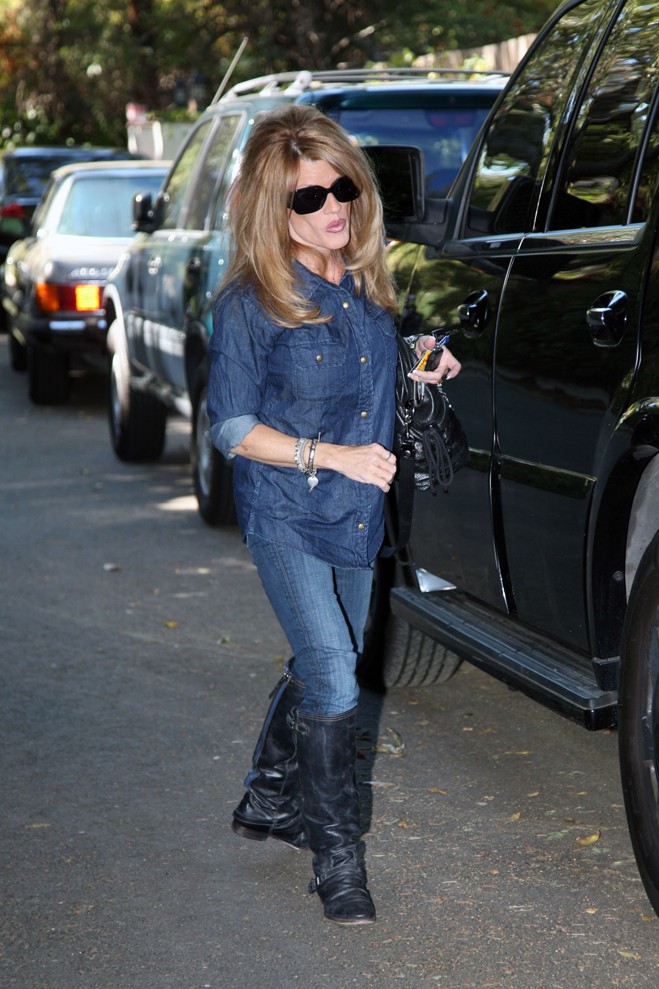 Previous Next
Chauffeuring daughterDemi Lovatofrom PBS to Disney helped De La Garza develop a flawless day-to-night look. The former Dallas Cowboys cheerleaderâ��hello, flexibilityâ��stays close to her Texas roots with big-hair and never-ending denim ensembles, appealing to all those who dream is to live in an '80s metal video. 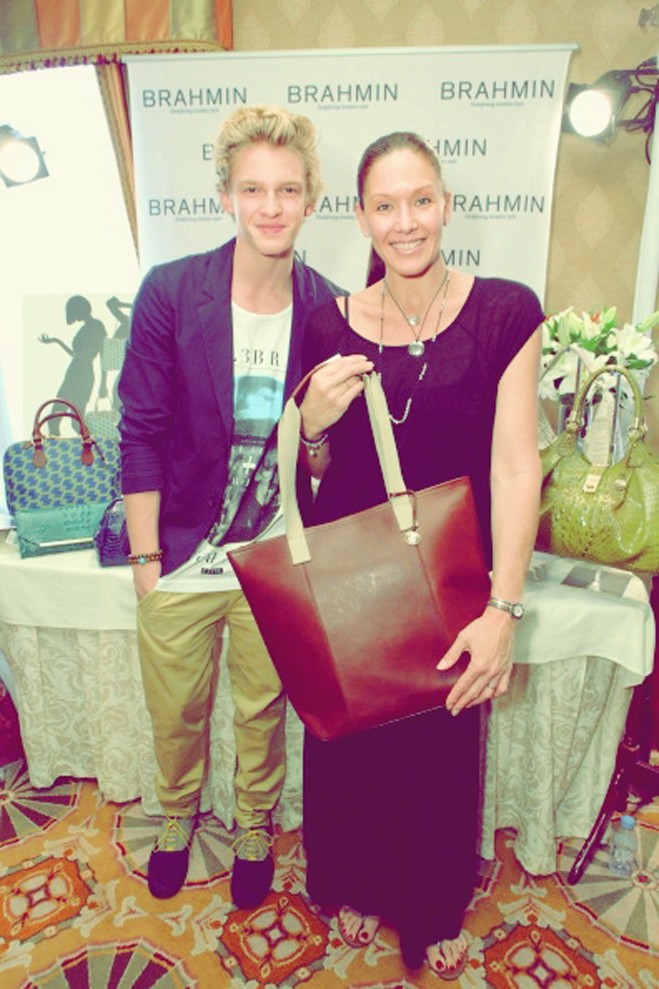 Previous Next
The Aussie native and mum to 15-year-oldbeach bumCody Simpsonwill swim laps around your sorry behind while you try and figure out if she looks more like Angelina Jolie or Miranda Kerr. (Don't stress; neither one is a bad choice.) 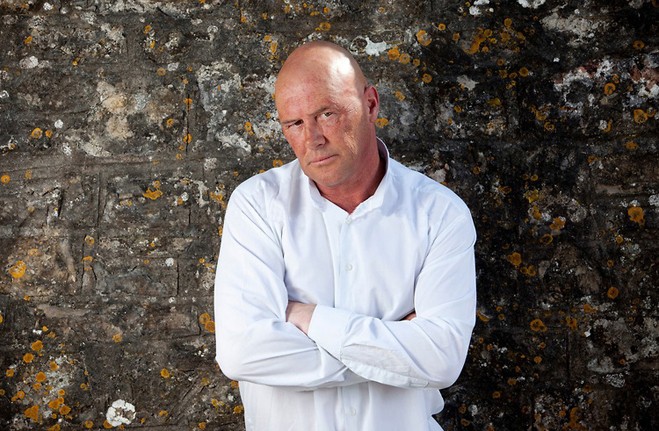 Previous Next
Talk about a bloke straight out of central casting! Though his relationship with daughterAdeleremains rockyâ��Adele has reportedly said she'd throw a drink in his face if she ever saw him againâ��there's no denying Mark Evans' "hard man" look is very appealing to certain women. 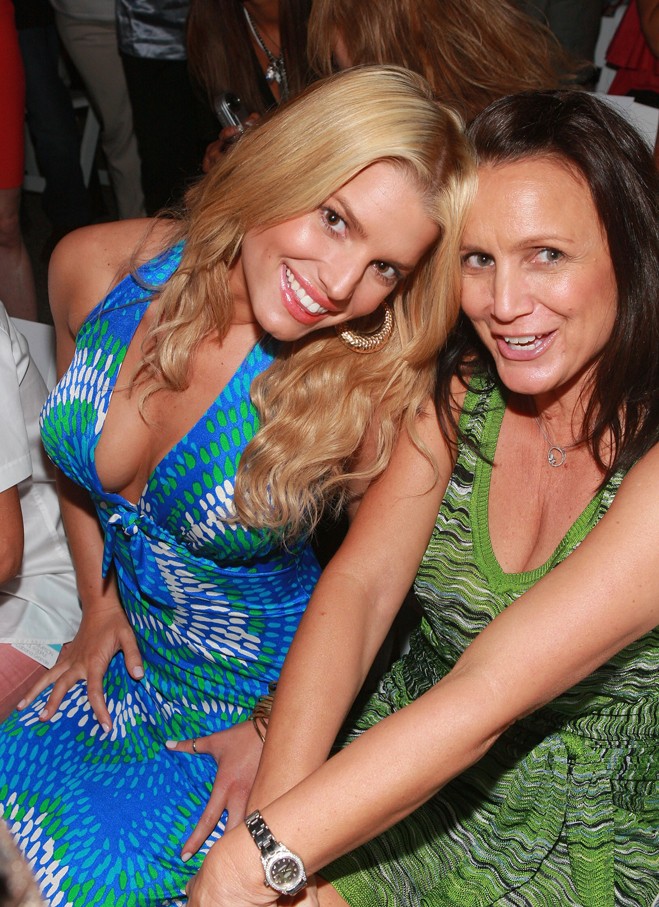 Previous Next
The longstanding stage mom to both Jessica and Ashlee has done a good job of letting her famous children shine in their own spotlight. While Tina has resisted the urge to go blondeâ��unlikefrosted tipsenthusiast Joe Simpsonâ��she shares her daughters' belief in the importance of leading with yourbreastbest assets. 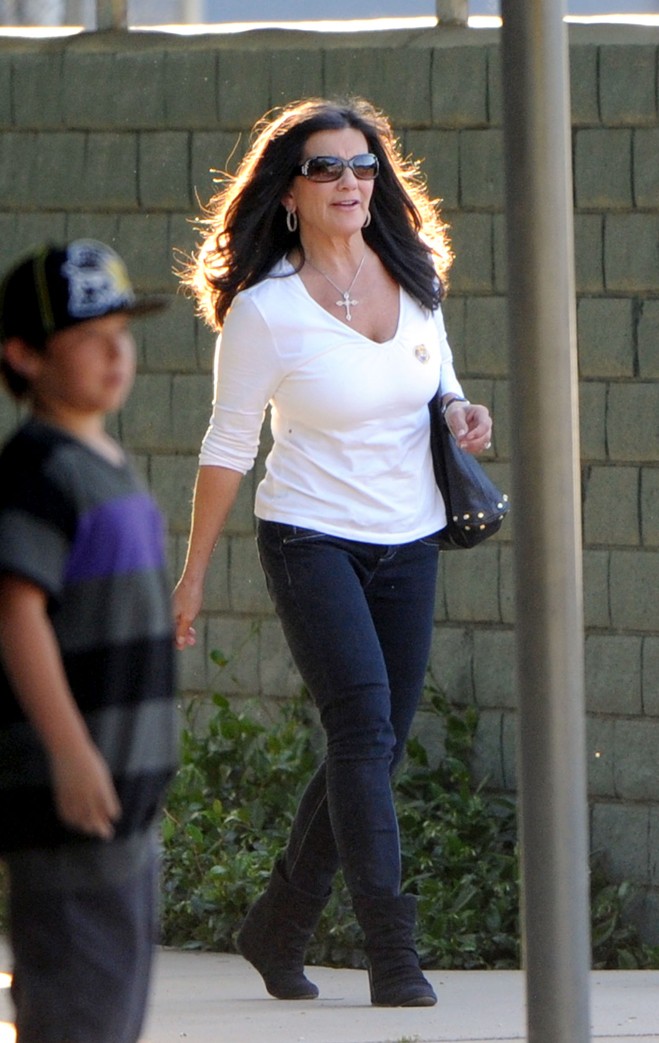 Previous Next
Watch out, boys of Brooklyn: Can you roll with a lady who's written more books than you ever will? The Anne Roiphe of the pop-mom scene,Britney's mom has authored three nonfiction bestsellers:Heart to Heart,A Mother's GiftandThrough the Storm: A Real Story of Fam and Family in a Tabloid World. 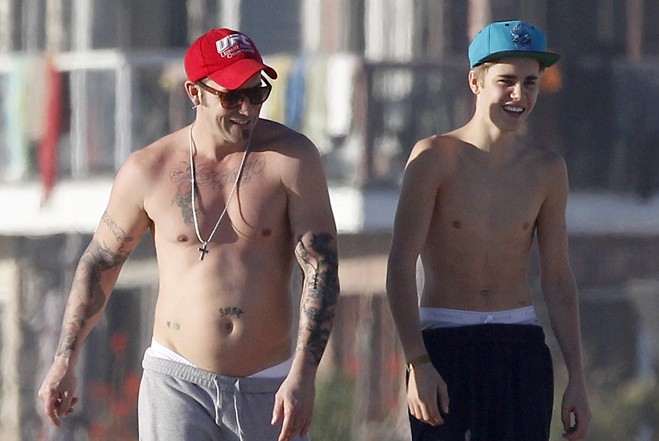 Previous Next
ThinkJustin Bieber's cute? Well why not go back to the source of those great genes? Jeremy Bieber is the total package: He loves music, is great with kids and possessesan awesome set of abs. 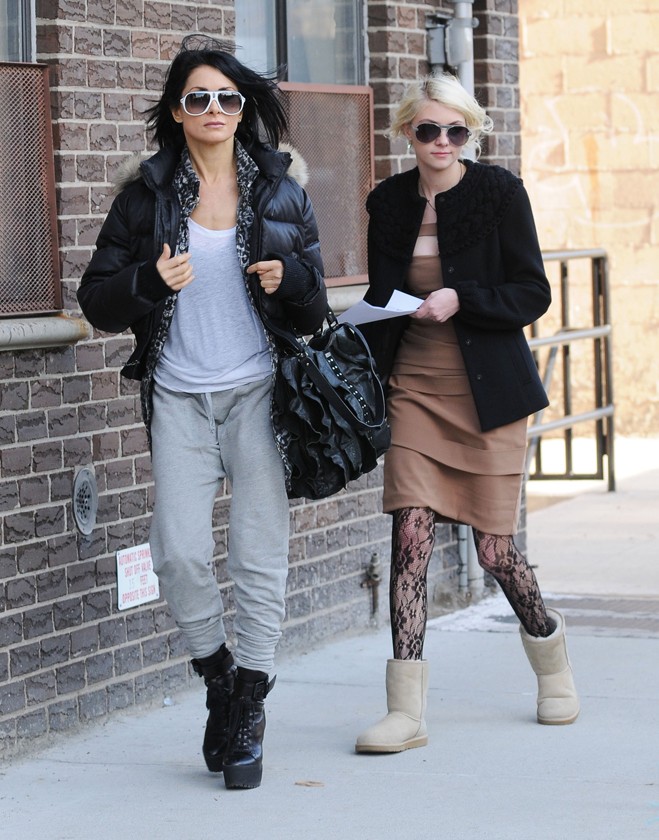 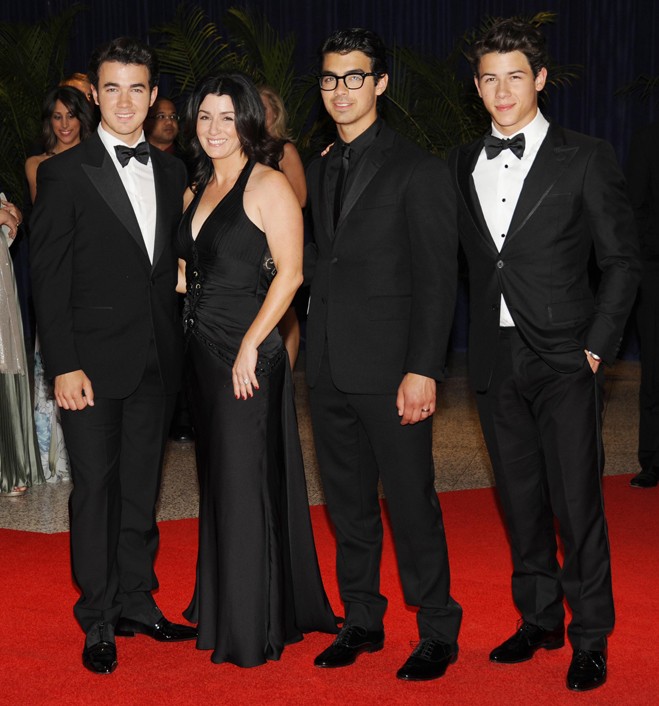 Previous Next
Having had three of her four sons tour the world before they could legally order a drink, one would think the face of Mama Jonas would be worry-stricken and sleep-deprived. The success of her talented children has only allowed her more opportunities to dress up and flaunt her youthful bodâ��as well as her parenting skills, thanks toKevin's reality show. 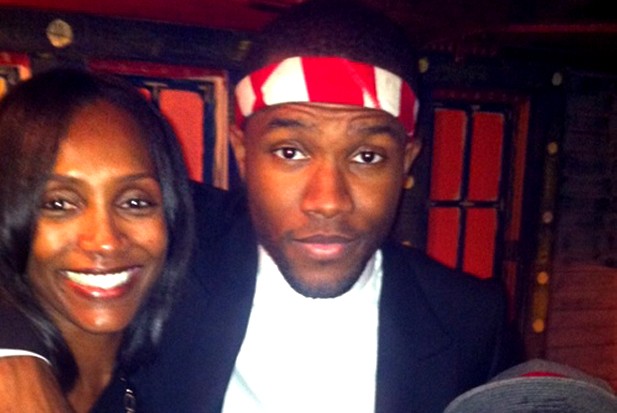 Previous Next
AfterFrank Oceancame out as bisexual earlier this year, mom Katonya Breaux-Riley was one of his biggest supporters, tellingher Twitter followers, "My son is the most incredible person I know." There's a lady who's beautiful inside and out! 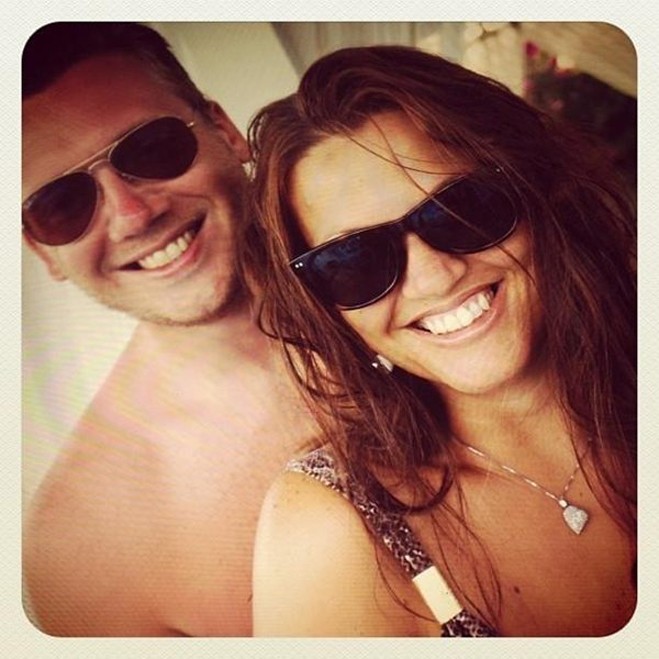 Previous Next
Now we know whereLouis Tomlinsongot his indomitable spirit from (as well as his Instagram skills!) This foxy Yorkshire lass has been one of the feistiest One Direction parents on Twitter, taking to messaging service in constant battle with the masses of Directioners intent on tearing down son Louis' relationship with Eleanor Calder. 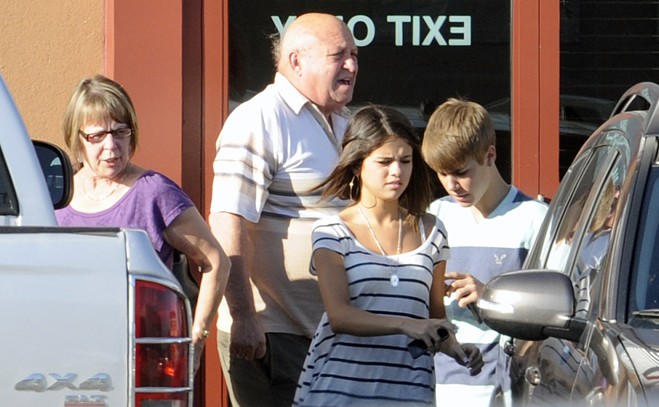 Previous Next
Since this is an equal opportunity list for those who love hotties both young and old, we thought we throw in a GILF (grandfather I'd like to... yeah, you get the idea). Bruce is the proudpop-pop of Justin Bieber, proving that if and when The Bieb's famous locks go, he'll still be pin-up material... of the Mr. Clean variety. 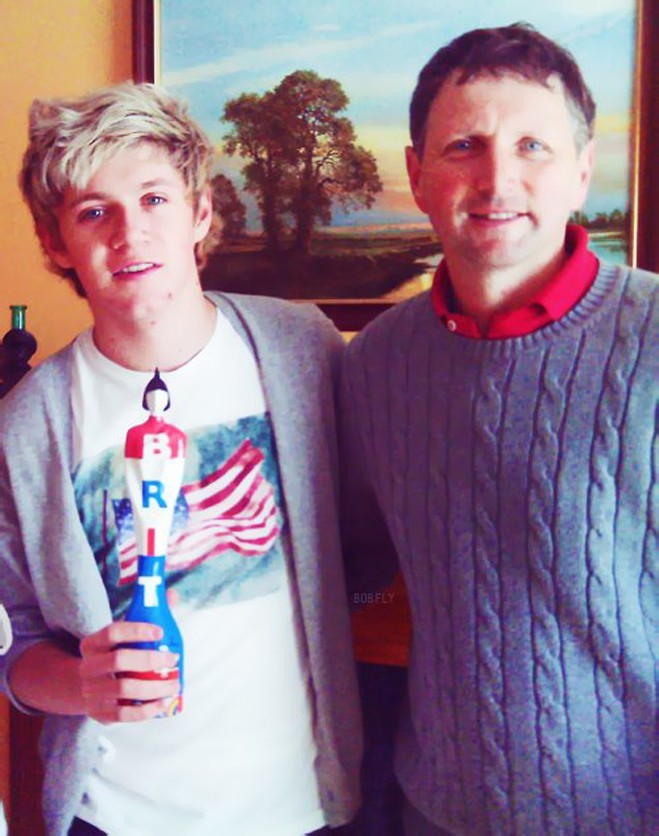 Previous Next
Hey, what's Academy-Award-nominated actorRalph Fiennesdoing hanging out with One Direction? We're kidding of course, but wow, who wouldn't want to get lost inNiall's dad's bright blue eyes? 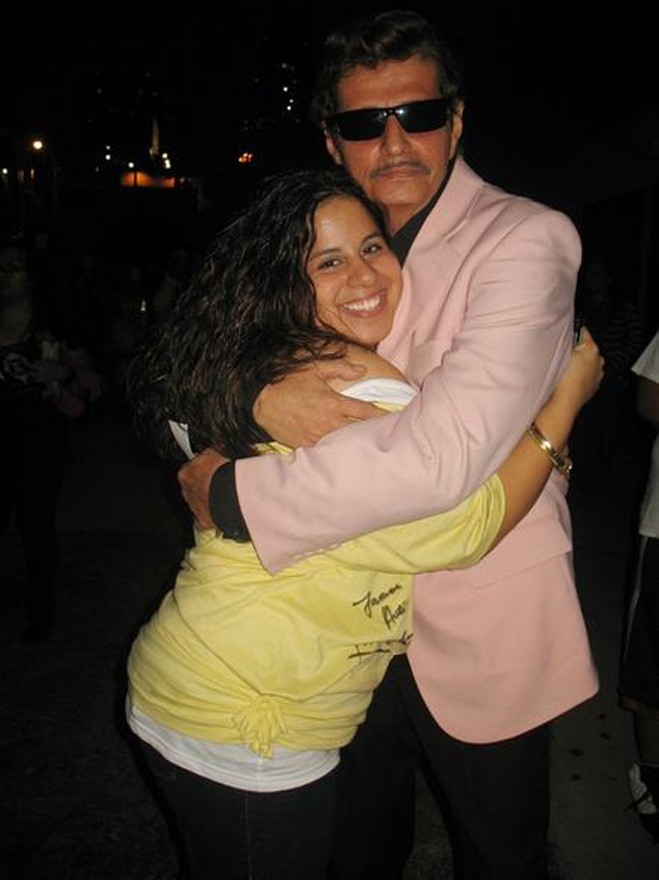 Previous Next
Wouldn't you want to meet the man who gaveBruno Marshis swagger? Papa Hernandez encouraged his son's throwback sensibilities from an early age, getting him work as the world's youngest Elvis impersonator, and even letting little Bruno sing with dad's doo-wop group, the Love Notes. He also goes by the name "Dr. Doo-Wop," so you know he's one cool customer! 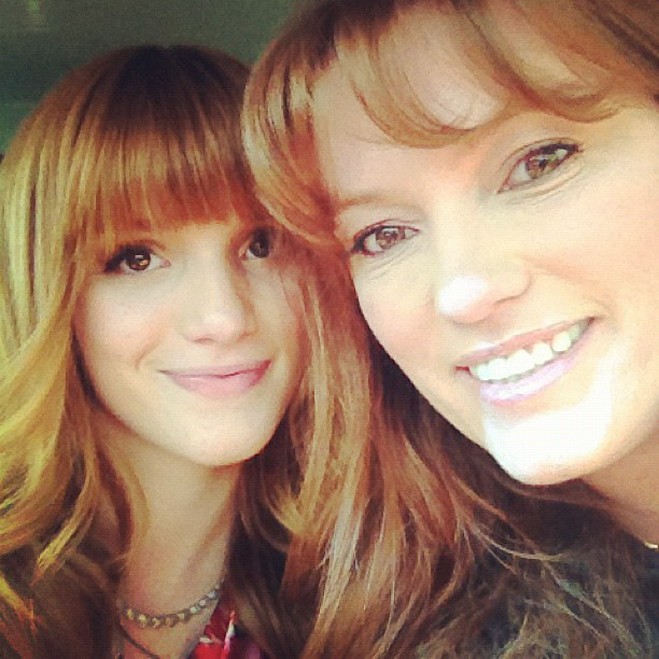 Previous Next
Now that's a pretty picture! Besides being mom to a Disney star, Tamara Thorne is a talented photographer whosebright and ethereal imagesofBellahave cemented her daughter's star image. 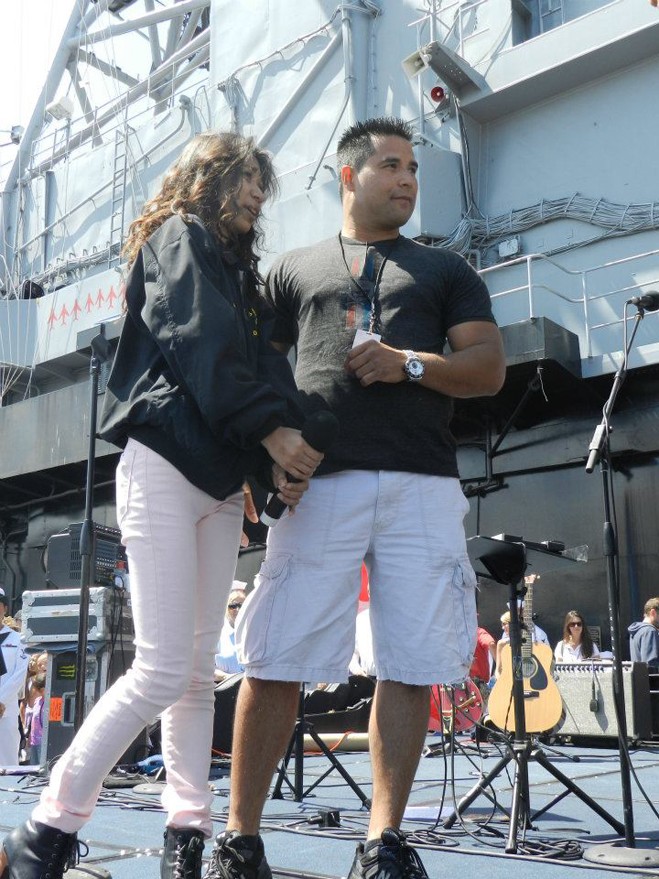 Previous Next
All those muscles, and he's a patriot, too! Texas hunk Gilbert Sanchez, father of American Idol runner-upJessica, is an Iraq veteran and proud member of the US Navy currently stationed in Singamore. Don't you love a man in uniform? 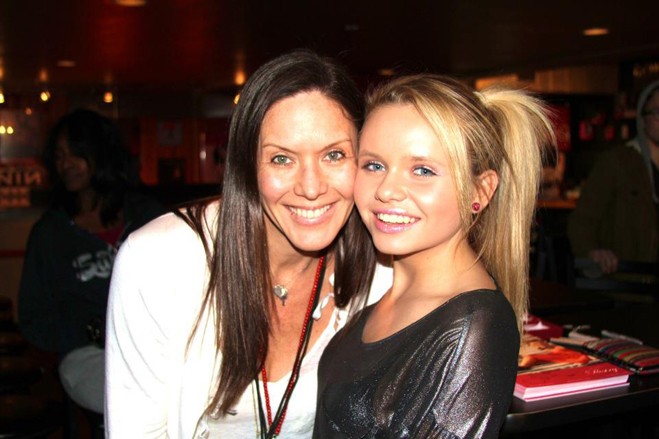 Previous Next
Are you a gruff high-school football coach looking for your own real-life Tami Taylor? Look no further than this feisty momager from Texas, who has guided sonAustin Mahonefrom home-school to the top of the charts.
The horny dudes of American Pie coined the term; Stacy's mom lived it. Pop culture crushes don't always have to be relegated to the talented performers who thrive onstage, especially if their parents can make you weak in the knees. Father's and Mother's Day come but once a year, which is why we're taking the time to recognize the beautiful men and women shepherding their talented children from behind the scenes. From Justin Bieber's MILF-y mom, to Mr. Malik's own interpretation of the Harry Styles swoop, enjoy our selection of the hottest moms, dads and maybe, just maybe, grandpas of our favorite pop stars. They're not all single, but you can dream. (And, after you're done reading, vote for your favorite pop-star parents right here!)