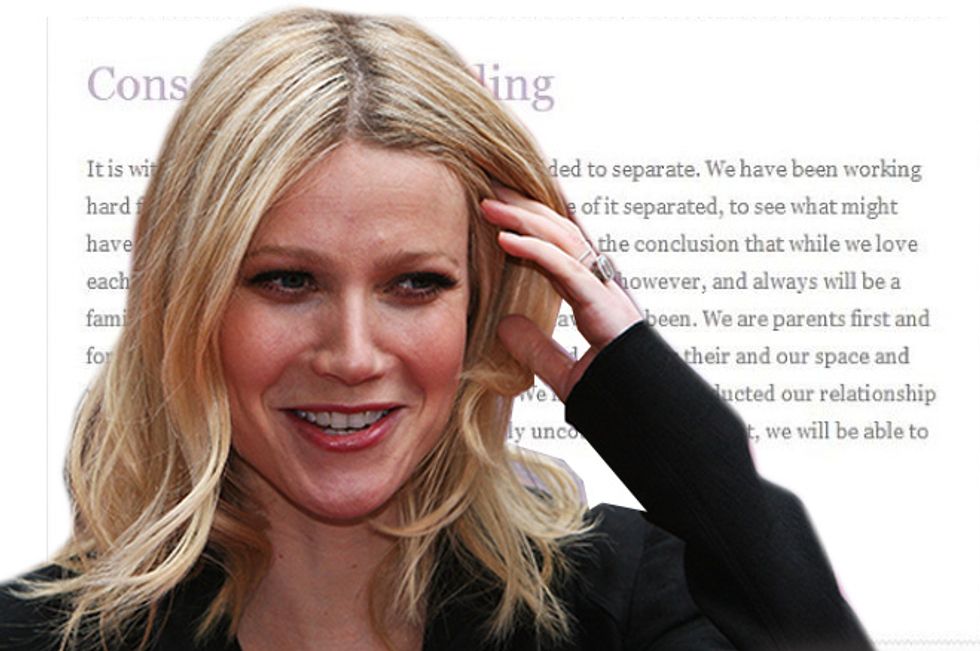 Gwyneth Paltrow and Chris Martin are a notoriously private couple so it was kind of a shock that they publicly announced their separation—even if it was via Gwynnie’s website GOOP.

What wasn’t shocking however was the lovey-dovey, new agey language the statement was written in—I mean, we all know Gwyneth LOVES that shit.....along with yoga, Organic everything, natural bush and Oprah Winfrey.

But, let’s face it…. do a couple who are splitting up really still “love and respect” each other? Do we ever really believe that claptrap? I know I don’t… but then I’m a bitter old cynic.

And with that in mind here’s a stab at what I believe that statement (which you can read HERE) was like BEFORE it was carefully edited and finessed to meet the right tone.

It is with saddened hearts that my husband the selfish prick Chris Martin and I have decided to separate after trying to seem like a couple for the last hundred years, it feels like.

We do not like the D word as it makes the children cry and my mother will say 'I told you so!' which I am so totally sick of hearing. We have made up the term 'Conscious Uncoupling' and I think I might copyright it. It means that we are really really aware of what we're doing, unlike the rest of you who are not really present, if you know what I mean.

While we have tried everything to stay married, nothing worked but in a way, we are closer than we have ever been before. We can now speak our minds, and I really let that prick have it. I expect that we will only grow closer when we go public with our (alleged) past and current affairs.

Got that, Chris Martin, Rockstar Esquire? Past AND present. Namaste, motherfucker.