Wallpaper. Fills Us in on the Seven Habits of Highly Effective Party Rockers 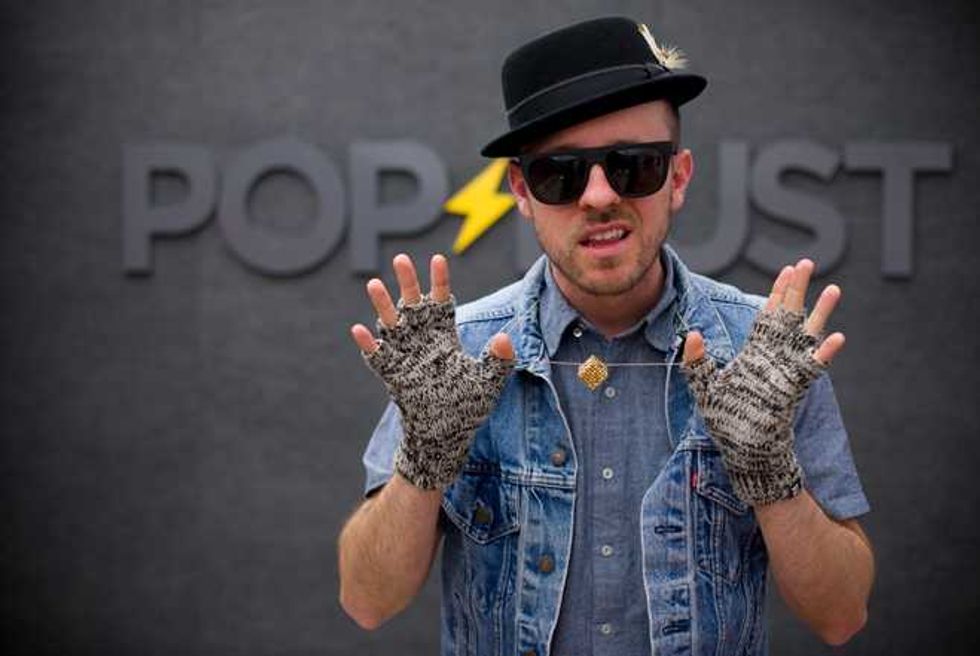 Oakland's own Ricky "Wallpaper." Reed (nee Eric Frederick) has been producing party-rock anthems on his own since the days when LMFAO was just a glint in a day-trader's eye. With his "white-boy swag" scoring him some crucial endorsements from both the Silicon Valley tech scene and the Jersey Shore set, Reed made the jump from DIY partier to major-label artist late last year, signing with Epic Records on the strength of tracks like "#STUPiDFACEDD" and "Best Song Ever." On the verge of his major-label debut, Wallpaper. stopped by the Popdust offices to share his secrets to great dance anthems.

1) EMBRACE THE SPECTACLE WITHOUT BLOWING YOUR BUDGET

My live show is a five piece. Two drummers on kits flanking the stage, then a man in the middle who's a percussionist-sorta-hype man. So we've got this big drum line and it's very visceral, with three of them back there and me an Novena up front. She is my sidekick/singer. She's also Sly Stone's daughter, and looks just like him—crazy. She's wild. She also plays the keytar.

The live show is very loud and heavy. Not like a DJ walking around with me like [makes nerdy face]. It's more of a rock show than anything else. We had the drums custom made, with frosted acrylic white shells, and they have mutlicolored lights inside of them, so our crew "plays the lights" during the songs. This is all DIY. Right before we signed the deal with Epic, we found a guy, we pooled our lunch money together, and we pulled it off. That's been the mantra of the project: Think of something cool, don't wait for somebody to help you with it, figure it out.

2) BUT DON'T LET THE LIVE SHOW LIMIT YOU

I never take the live show into consideration at all in the studio. It's go-go-go, as far out as possible. I'm going to make a terrible comparison, it's going to sound horrifically egotistical, but the closest thing is when the Beatles were making Sgt. Pepper, they were probably like "Fuck it." I have to think that way to make the biggest coolest songs, and then figure it out later. If you perform things with sincerity and intensity, it'll translate, even if it's skewed.

You also need to get a sense of the density of the crowd. I've made a few misjudgments. We were playing in New York at Webster Studio, at CMJ event with T. Mills. I was all pumped. Like "CMJ, let's make a splash, here we go!" And as I'm running, I get past the point of no return at the edge of the stage, I look out and it's all 13 year old girls. I make the jump, and luckily I didn't hurt any of them. But they were all like [scoots away and shrugs] and my tailbone just—POW! So it does happen. It's always a risk.

In this day and age, you bring out a guitar, and people just stop dancing. Just like "Nope nope nope nope nope." I was afraid of that. I started out playing rock groups in high school, but it wasn't until this album that I went back to my roots. Stylistically, these things contain rock elements, but at no point is it like, "This is a rock song."

I was listening to the new Japandroids album, which is awesome. I legitimately think the time is now for those kinds of songs. I would love to make a song like that, but I can't quite go all the way there. I had a stylistic direction, though. I just want the opening to be almost arena rock, or a glitter band. Just fist pumping. For my song "Last Call," we started with the hook, but it didn't have that big techno drop. And I was in the studio real late, and I'd been drinking and hanging out with people but they all left. I was kind of drunk and just staring at the computer and going, "I'm going to remix my own song." I was going to treat this as if I was remixing an AC/DC song. So I call my new stuff "Avicii/DC."

On this new record, dealing with my first year on a major label, trying to write "hits": It's a bad, fucked-up mental state to be in. And so I pushed myself to the limit, until I was like, screw it. I'm going to do what I want to do, and try some things that feel good to me. I had this whole creative renaissance in the past few months where I just kind of re-wrote the record from scratch. I'm crazy about it now.

6) TAP INTO SOMETHING LARGER THAN YOURSELF

LMFAO make great party records, but I don't think they have a desire to create something that has an underlying message to it. (Which is fine, obviously.) They are there to literally rock the party; I am there to provide a meaningful experience that includes that, but also means bringing you closer to the people you came with. I'm trying to use those moments of elation and joy and clarity that you get at midnight, to help you think about the people around you, think about what's happening in your life, and have a real moment. I want to get people there so they can think about the important things.

Like in "Best Song Ever,"  that was me speaking in this weird first-person diagetic way, and I don't think people even got that. The idea was that I am that dude in the hook of that song. "You are my fuckin' best friends. Fuckin' best night ever."

7) PUT YOURSELF ON THE SAME LEVEL AS YOUR AUDIENCE

All the pop stars are obsessed with their own bravado, or how tough they are. If it's not "Tonight's the best night of your life," then it's "I could help you out, let me help you, I'm so strong I'll lift you up." There are no songs where the singer themselves identifies with their base, and with their friends. Like sometimes, I need help. I need a helping hand or whatever. I didn't think there was anything out there that was saying that. You can sing an idea like that still in a fun, rowdy way.

My song "Ricky Reed Is Real" sums up where I'm currently at in the messaging of the album. It's a a phrase I use a lot, and it's somethin  my fans say a lot on social media. It means two things.

One is, I'm aware that I could be entering the realm of pop singer—potentially pop star—in the next year or two down the road. And I like to think of myself as the blue-collar sort of everyone pop singer for the 99%, who doesn't preach escapism and buying things you can't afford. I don't want to be that dude. I want to make pop songs for regular people. Song that are also not like, "Oh, I fucking hate my job," trailer-park rap cliche stuff.

The other half is I wanted to make the idea of what I'm saying and the idea of me... like they say in Batman [gravelly Batman voice] "an idea is bigger than a man." What this album summarizes is, maybe it's you on your best night, but it's also it's you on your worst night. It's the day you get fired. It's about all these different good and bad things we deal with. Some are mundane, some are life-changing.

Wallpaper is currently gearing up for a west coast tour.